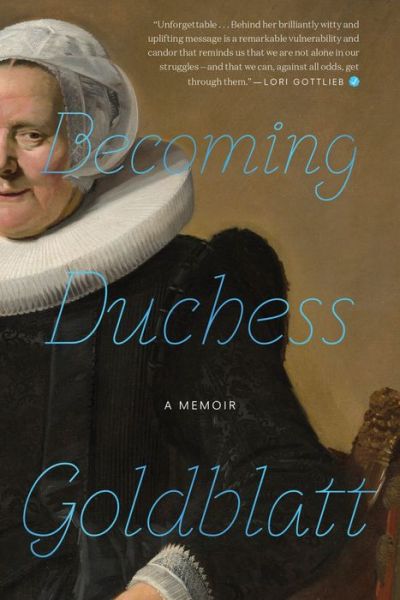 Sometimes I tie your words in linen with a little lavender and mint and use them as a poultice for my weary old heart.

A few people in my circle eventually figured out it was me behind the account, but they weren’t interested in connecting with a fictional character on social media. They may or may not have thought it was a waste of my time to write this character, but they certainly considered it a waste of their time to read it. They told me so, flat out. Repeatedly.

I couldn’t blame them. Most of them were in school or had jobs or kids to worry about, or at least a steady workout routine and a couple of dogs.

And if that had been all there was to it, that would have been the end. I would have gotten bored and dropped Duchess Goldblatt altogether.

But something unexpected happened.

Other people, strangers to me, started taking an enthusiastic interest in Duchess. I hadn’t anticipated that at all. I’d been a professional writer for years, and like many writers I know, I was a white-collar odd-jobber: newspaper reporter, freelance editor, corporate writer, grant writer, speechwriter, proofreader, nonprofit arts organization executive, ghostwriter, you name it. I had a mindset for many years that work begets work, so I never turned down an offer, and besides I wanted to put my husband in a position to pay off all his debt from graduate school. (Teamwork, as it were. Small price to pay for building a life together.) For years, I’d worked two regular jobs, plus I picked up side gigs. As a freelance reporter, my byline even appeared in the paper all the time, and, frankly, my work was pretty good, and I say this to you in all honesty: nobody I knew cared.

I remember once I chased a friend down the street with one of my lengthier feature articles in hand, trying to get him to read it, and I later folded a paper copy of it into a fanciful origami bookmark and slipped it into the book he was reading, where he couldn’t help but notice. I’d worked on that piece for months, trying to make something beautiful and true out of thin air, but my friend never got around to reading it. A week later, the papers had all been recycled, and everybody forgot about it. And I understand. That’s generally the way it works.

So you can imagine that it was a shock to me when, out of nowhere, strangers started extending friend requests to Duchess and responding to her posts. I had no idea who these people were, but you have to remember that the character of Duchess had been imagined as a famous author, so Duchess figured: if people were reaching out to her on social media, they must be devoted fans of her books.

And so she responded to them as if she were any other famous eighty-one-year-old author responding to her readers: graciously, kindly, sometimes a little bit imperiously, and if they wrote something obnoxious or impertinent or mean, she’d bring them up sharply.

She started to attract more attention. Word of mouth brought her new “friends.” I had hardly any friends in real life at that point, but Duchess had plenty. She was always careful to remind people that she was fictional, that she only existed on social media, and, no, she wouldn’t be going to see their bands or attend their poetry readings or drop by their holiday parties. I didn’t get invited anywhere, nor did I maintain much interest in leaving the house, but Duchess was getting invitations all over the place.

“I’m fictional, but my love is real,” she told people, over and over.

It was refreshing, really; it was all the fun of having a wide circle of friends without any of the usual obligations or, on the flip side, any of the traditional expectation that I would ever be able to count on them in any way.

Once you let go of hope, you never have to be disappointed again. I’d finally figured out a way to game the system of being a human alive in this old broken world. If desire is indeed the root of all suffering, then without desire, without hope, without even a self, I reckoned, there would be no more suffering.

It’s a terrible thing to get old. I lost another lifelong friend today. And yet I’m sure I put her here somewhere.

I was in a coffee shop one day with my old friend and boss, Chuck, one of the very few people who had stuck by me when everything fell apart, when another guy we knew, Travis, walked in and waved to us. He called out from across the shop, “Hiya, Chuck,” and then added a courtly little bow. “And good morning to you, Duchess.”

I shook my head at him in panic, but it was too late. Chuck had caught it. We’d worked together for years. He’d seen the name floating around on social media, but he hadn’t ever put her together with me.

“It’s a secret,” I said. “Don’t go running around telling everybody.”

He rolled his eyes. “Oh my God. Of course you’re Duchess Goldblatt. I should have known.”

“Don’t tell anyone,” I said again. “And as for you,” I said to Travis as he pulled up a chair at our table, “don’t you go running your mouth, either. I don’t even know how you found out.”

“I’m sorry. I didn’t know it was supposed to be some big secret. How many friends do you have on there now?”

“Almost fifty, I think,” I said, which made us all smile. I probably haven’t had fifty friends cumulatively in my whole life, and those two clowns knew it.

“Duchess got another friend request this morning from a drag queen in California,” I said. “She’s big with the drag community, for some reason. I consider it a great compliment.”

Travis nodded. “I can see why you’d be flattered. Drag queens have a very high standard for humor.”

“I’m pretty sure that a lot of people think Duchess is a gay man,” I said.

“Why would anyone think that?”

“I don’t know. She keeps telling them she’s a woman,” I said.

“Well, no offense,” Chuck said, leaning toward me and lowering his voice, “but you’re a little effeminate.”

“Oh, right. I always forget that. I don’t think of you that way. As a woman-woman, I mean.”

“No offense taken, jackass,” I said.

“Now that you mention it,” said Travis, “it might be that way of talking you have.”

“What way? Why? Because I refer to myself as prancing through the world in a vibrant, unending hymn of joy?”

“Can I be friends with you on social media?” Chuck asked.

“Oh my God, you’re ridiculous. Okay, then. Her. Can I be friends with her?”

“No, I don’t think so. You’re not great at keeping secrets, frankly, and I don’t think she’d like it one bit. She’s extremely careful. She went to great lengths to remain anonymous.”

“It’s not me. She’s a different person. She lives inside my head, that’s all.”

Travis leaned in over the table and lowered his voice. “It’s not her. It’s you. You’re Duchess Goldblatt.”

“Well, obviously I know that,” I said. “We’re not an idiot. She knows she doesn’t exist.”

“I can name you fifty people online who think I’m funny,” I said.

“When you saw her profile, did you notice she’s from Klein, Texas?” I asked.

“No. Why would Duchess Goldblatt be from Texas? Have you ever even been to Texas?” He paused for a minute, thinking. “Does this have anything to do with Lyle Lovett?”

“Of course it is. You and Lyle Lovett. Like he’s ever going to see your little social media account with fifty friends.”

“That’s not the point. It’s for me. It’s my little joke between me and the universe. I’m giving a wink and a nod to the sun and moon and stars.”