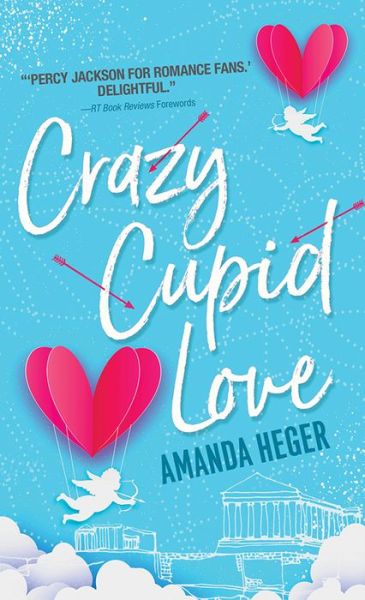 For more than twenty years, Eliza had been working on a list of things she hated more than Valentine’s Day. And finally, after decades of hard work and dedication, she’d narrowed it to the following:

Okay, so it was still a work in progress. But to be fair, she had yet to encounter anything she despised as much as the onslaught of pink and red hearts that appeared each February. Not to mention, if your birthday happened to fall on Valentine’s Day, avoiding the slew of cutesy cards and pictures of diapered, armed babies was nearly impossible. And if you were a Descendant of Eros with the misfortune of being born on February fourteenth? Forget it. Everyone everywhere commented on how cute and coincidental it was that a “Cupid” had been born on love’s holiest of holidays.

Eliza ducked her head as she made her way through Red Clover. Leaving her apartment always made her anxiety flare, but walking through the seasonal aisle of the grocery store on Valentine’s Day felt like lumbering through a library with a bullhorn. Make way! World’s worst Cupid coming through!

This all could have been avoided if the watch she’d ordered for her twin had simply arrived on time. Instead, she had to face the offensive barrage of red roses and chocolates to reach the tiny display of birthday cards in the center of the aisle. Elijah better appreciate this, she thought. Otherwise, I may have to strangle him with a string of paper hearts.

But Eros himself must have been smiling down on her today because the store was eerily empty. She slid past the picked-over bags of candy and the last of the mushy Valentine’s Day fare. Her gaze landed on a brightly colored card with balloons across the front. Basic, simple, and able to hold a gift card. Exactly what she needed. Eliza pulled it from the shelf and opened the front. Birthday Boy, You’re Ten Today!

She shoved the card back into its slot and surveyed the other options. A flowery card with hard-to-read script and enough gold edging to make a leprechaun jealous? No. Two kittens batting a ball of yarn? Not her brother’s style. A frog with googly eyes proclaiming You Aren’t a Tadpole Anymore? In the running.

“Excuse me. Miss?” An elderly man’s voice came from behind her, wobbling a bit on the end.

Eliza’s shoulders tensed. Here we go. Yes, I’m her. The infamous Eliza Herman. She turned. The little old man looked vaguely familiar, but she couldn’t quite place him. His ears were nearly as big as his head, and just a few gray hairs swooped over his shiny dome. Calling it a comb-over would be generous. “Yes?” she asked, braced for the worst.

“Can you hand me that card right there?” He pointed with a liver-spotted finger. “The one with the wiener dog?”

Eliza’s breath whooshed out all at once, and in its place, sweet relief filled her chest. Valentine’s Day was making her paranoid. This little old man wanted help reaching something on the top shelf, not to badger her with questions about her past. She rose to her tiptoes and grabbed the card. Bright-blue letters across the bottom read, I Hope Your Birthday is a Real Wiener. “Here you go.”

“Thank you.” He inched the card open and proceeded to read the inside. It was as if Eliza had ceased to exist.

She grinned and gave herself a mental pat on the back. Look at you. Being totally normal. She’d even helped an elderly man and, in the process, found a perfectly acceptable card for her brother. All she had to do was reach up, grab another wiener dog, and—

“Ooof.” The old man leaned down to rub the top of his foot, where the chocolate had landed. Green and gold sparkles shot from the site of his injury, filling the aisle with enough Love Luster to momentarily obliterate the pink and red decor. And when the Luster began to fade, the scent of seawater and sun hit Eliza hard.

She threw her hands over her mouth in panic. On the one hand, she needed to make sure the man was okay. But she also needed to get away from him before he could look up and—

“Well, hello.” He bent into a sweeping bow.

Too late. Eliza closed her eyes and dragged in a deep breath. Of course it was too much to ask to make it through Red Clover without incident. Of course. “Sir, I’m very sorry—”

The old man straightened up as if the infatuation running through his ancient veins had taken fifty years off his age. He handed her the candy bar. A crack ran straight through the center of the chocolate. “Stu Vannerson,” he said. “And it’s a pleasure to make your acquaintance.”

Eliza’s brain screeched to a halt. Stu Vannerson. Old Man Vannerson. He’d lived on their block years ago. Elijah used to cut his lawn. Eliza sold him Girl Scout cookies every year. Then he’d sold his house and moved to the Gold Lea Assisted Living Villas across town.

And now he was enchanted with her.

Eliza forced herself to smile. This whole adoration-by-Hershey thing wasn’t good, but it wasn’t the end of the world either. She’d explain what had happened and then go about her not-so-merry way. Plus, once she left the store, the old man’s hormones would settle back to near normal. In approximately twenty-nine and a half days, it would be like nothing had happened at all.

Maybe Eros wasn’t smiling down on her today, but he wasn’t smiting her either. Crisis averted. “Mr. Vannerson, I’m Eliza Herman. I don’t know if you remember, but you used to live down the street from me.”

His eyes sparkled. “The Cupid girl?”