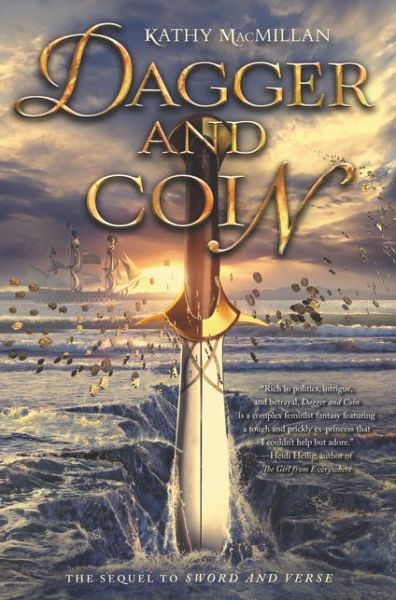 I came to as Valdis was carrying me up to my room in the palace. He must have wrapped my ankle tightly in something, because the floppy sensation was gone.

“I gave you castromana leaf,” he said when he saw that I was awake. “To dull the pain temporarily.” Though Valdis was officially my family’s taster, he had also been treating my mother’s headaches, nausea, and bleeding pains for years, and he knew herbs as well as he knew poisons. He’d been one of my father’s most valued men since serving under him in the border war with Emtiria twenty-five years before, and even now refused to cover the Gamo eagle tattoo that stood out against the brown skin of his neck. Valdis had been the one to bring me my father’s signet ring after his death, walking right past my mother to do so. After all, Mother was merely a Gamo by marriage, and Father had long ago declared me his heir when it became clear that she would bear no sons. But I wouldn’t have put it past her to steal the ring from Father’s corpse, and I suspected that Valdis had gotten to it before she could. In that quiet act, Valdis had declared his loyalty to the Gamo family and to me as its head, and I had rewarded him by immediately announcing that he would stay on with the family in the same role he’d had with my father.

“I have it,” said Jonis’s voice behind him, and Valdis’s mouth thinned under his mustache. I understood. I didn’t like the idea of an Arnath, especially Jonis, creeping behind us with a dagger any more than he did. But I was on the Ruling Council of Qilara now; I had to play their game, even if that meant putting up with Jonis. My family’s power, and my access to my own inheritance, depended on it.

When we arrived at my door, I fumbled with the key to my room. The corridor was dark enough to steal my breath.

Inside, the shutters were open, letting in the evening breeze and enough dim light for Valdis to step around my trunk and deposit me on the bed. I scrambled to light the lamp with shaking fingers.

My breathing didn’t slow until its yellow glow lit the room. I collapsed against the pillow, my forehead damp, my hair in sticky tendrils against my neck.

Jonis had followed us inside. I considered having Valdis eject him, but I wasn’t about to let on how much it unnerved me to have Jonis hovering about while I was incapacitated. So, as usual, I went too far in the other direction in an effort to prove that I wasn’t frightened.

“Tend to the attacker,” I told Valdis. “We need him alive for questioning. Send the doctor up.”

Valdis cast a dark look at Jonis but did as I ordered.

The moment he had left—pointedly leaving the door wide open—Jonis turned on me. He had a scar over his left eyebrow, a souvenir from the day that he and his Resistance fighters attacked the palace, probably given to him by one of my father’s men. It stood out now, the shiny dark pink of pig flesh against his pale skin. “Why do you keep your room locked?” he snarled. “What are you hiding?”

I gritted my teeth at being addressed like that by anyone, let alone an Arnath rebel who had kidnapped me and held me in a pitch-black tomb, and who was lucky my father hadn’t caught him and ripped him limb from limb. I bet it would please him that I hadn’t been able to sleep without a lamp lit since I had returned from the tombs, that I grew short of breath whenever I couldn’t see the sky. But I wouldn’t ever give him the satisfaction of knowing that.

“Of course I lock my room,” I snapped. “Only an idiot would leave her room open.”

. . . or someone with nothing to steal, I realized. Jonis had probably never even owned anything worth locking up.

“That could have been a setup, to earn our trust.”

“Me? I’m not the one with experience in assassination.”

That shut him up. My father may have been part of the plot to usurp Mati’s throne, but Jonis’s Resistance had killed Mati’s father.

He finally handed me the weapon. It was slightly larger than the jeweled knife my father had given me three years ago on my sixteenth birthday, the one that was only useful for paring fingernails. But this blade was sturdy and sharp. I held it close to the lamp, but there was nothing to see on the smooth surface of the heavy handle.

“The design’s not Qilarite, not Emtirian. It’s not anything I recognize,” said Jonis.

“And since when are you an expert?”

“My master sold such things in the marketplace. Had to know to wait on the customers, didn’t I?” The acid in his tone was a reminder that Jonis had, until recently, been a slave to Horel Stit, one of the cruelest merchants in the City of Kings.