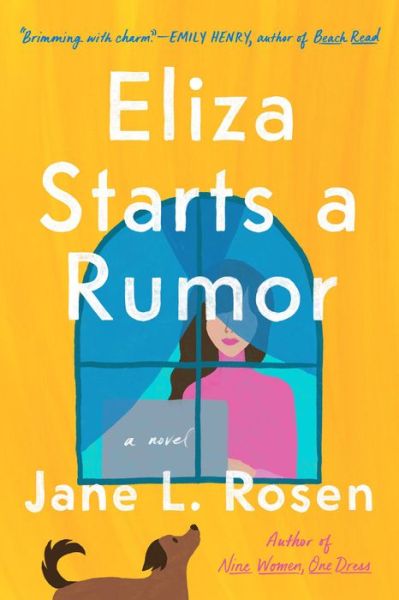 Eliza dropped her grocery bags on her kitchen counter and rummaged through them, carefully pulling out the frozen food and perishables before collapsing into a heap on her kitchen floor. She had made it through her shopping list and was thankful for that. But every bit of strength she’d summoned at the supermarket seemed to have declared mutiny and turned against her on the car ride home.

It would have been so much better for Eliza if her husband, Luke, knew what was going on, but she had made every effort over the past few months to cover it up. She certainly had practice. This may have been her first major flare-up since high school, but in the years in between, she’d still preferred the safety of home—often using the excuse of having something in the oven. It was hard to know if she loved to bake and loved running the bulletin board or just loved how they tethered her to her kitchen and computer.

So though it wasn’t unusual for her to be a bit of a homebody, hiding it all was like a job in itself. Her go-to list of fun things to do on weekends was substituted with a list of well-crafted excuses. She perfected the facade of the busy housewife coming and going—placing her tennis racquet by the front door on the days of her usual game and putting the things she bought online in old shopping bags strewn on the floor of the bedroom closet. Sometimes she would have to turn to illness: a stomach bug, a bad headache. Those were easy to pull off because both were actual symptoms of her anxiety. All she needed to do was come close enough to the estimated due date without a good excuse and she would soon find herself massaging her temples or vomiting into the toilet.

At first she missed Luke, really missed being close to him. For as long as she could remember they had looked forward to the empty nest phase of their lives. They loved being parents, but they also loved being alone together. They were lucky that way, lucky that the spark hadn’t fizzled and that they truly liked each other’s company. But lately she resented having to answer his solicitous questions, resented his unintended part in making her feel pathetic. When that happened, when she started wishing he would just leave her alone so she could stop dealing in excuses, that’s when she worried that she had done irreparable damage to her marriage and her family.

Eliza had held on to the notion ingrained in her since childhood that mental health issues were not to be spoken of. Though she was smart enough to know that being in a constant state of fight-or-flight was not good for her health, mental or otherwise, she never did anything about it.

Back when Eliza had missed four months of high school, the first time her agoraphobia rendered her nonfunctional, her mother pretended she was home with mono. Her daughter’s bout with mental illness, though it manifested itself differently, was the first time Birdie Reinhart had seen a glimpse of herself in her child. There was no way Eliza’s polished, stick-thin mother, with her shiny golden hair, would have admitted that her daughter, who did not receive her skinny gene or her shiny gene, had only inherited her crazy gene.

From the day Eliza was born, Birdie would stare at the chubby baby with brown eyes and dark curly hair and look for some reflection of herself, but none existed. Eliza inherited her looks from Birdie’s Jewish mother, while Birdie was an obvious by-product of her Protestant father. She had even changed her name from Bertha to Birdie at age eighteen, officially transitioning from Jewess to Wasp.

Back in high school, thankfully, Eliza’s problem departed as quickly as it had appeared. One day she woke up, got dressed, and went to school. Just like that. She never discussed with the psychiatrist, or her parents, or her best friend, Amanda, what had brought it on in the first place. In fact, none of it was ever mentioned again.

Years later, when Eliza met Luke, and he set about falling in love with her every flaw, she didn’t reveal that one. She wondered now, if she had been truthful from the outset, whether she would still be lying there in hysterics on her kitchen floor. As it had nearly every night since the twins’ high school graduation, the memory of the commencement ceremony took hold.

On that beautiful June day, Eliza had sat in the high school auditorium enveloped in a particular sense of pride she had never felt before. She had been prepared for it by other parents, who’d told her, “There’s nothing quite like watching your children graduate.” She was thrilled to be experiencing it for herself.

She had waited impatiently for the ceremony to begin, anticipating the pomp and circumstance to come. Luke, equally excited, sat by her side. He put his hand over hers, squeezed it tight, and smiled at her with nothing but love in his eyes. It was common for him to look at her like that. He had no way of knowing how much it meant to her. She had a much harder shell than her husband did. Of course, she loved him and the twins with all she had, but she tended to keep her own heart behind a wall—a very tall wall. She was beyond grateful that Luke had persistently leaped over it, and on that day she had personally dismantled more than a few bricks—her heart felt more open than she had ever remembered.

Commencement was taking a while to begin. She imagined the kids lined up in the hallway of the high school trying their best to be quiet, but too hyped up to stand still. “Imagined” may be the wrong word; a better choice would be “remembered.” Eliza had graduated from the same high school as her children some thirty years earlier. She had lined up in the same hallway where they stood now, as she and her best friend, Amanda, rearranged the line so that they could march down the aisle together.

Eliza looked down to see Luke fidgeting with the program, rolling it between his palms like he was shaping dough. She took it from him; she wanted to keep it for posterity. She straightened it out, bending it in the other direction, then pressing it flat on her lap. She opened it up to read, first turning to the page that listed the students. There they were: her graduates, Kevin Hunt and Kayla Hunt. As she silently read their names, she could almost hear the voice of the principal calling them up for their diplomas. She imagined the cheers as they each made their way across the stage. The anticipation was palpable both in her mind and in the room.

She turned to the order of events, glancing through what she already knew. The principal’s remarks would be followed by speeches from the valedictorian, a girl she had known since the kids were in kindergarten, and the salutatorian, a boy who played lacrosse with Kevin. She was eager to hear what they both had to say: smart young minds ready to take on the world.

She turned to the next page in the program, a special dedication. As she read it, she began to shake. She tried to steady her hands in her lap but seemed to have no control of her own body. The program dropped to the floor, and Luke bent down to pick it up. As he went to hand it back to her, she saw panic in his eyes.

Sweat poured out from under her arms, soaking the lavender A-line cotton dress with cap sleeves that she had worked so hard to fit into. She could feel the heat radiating from her scalp at the point where her hairline met her neck. Beads of sweat rolled off her upper lip and landed in her lap with such frequency that it seemed as if the roof was leaking. Her heart was literally shaking inside her body and she couldn’t seem to catch her breath, as if she was always one step behind it.

“Eliza, are you OK?” he asked in a panicked voice. “Should I get a doctor?”

Eliza looked down at the now melon-shaped circles of sweat under her arms.

“No, I’m OK. It’s just a hot flash.” She constructed her first outright lie to him on the topic.

It shut Luke up, as anything associated with menopause or menstruation always did. The first familiar notes of the graduation march began and all eyes, including Luke’s, turned to the auditorium doors. They swung open, revealing the graduates entering two by two.

As she stumbled out of the high school and into the June sun, she was only grateful that they had come in two cars. She slipped away from the crowd and got into hers alone. She locked the doors and drove down the block from the school, where she turned off the engine and screamed so loudly and so uncontrollably that she wondered if she might die. Wondered if her heart would explode right there, right on the spot.

Now, as she lay on the floor of her kitchen drenched with perspiration, just as she was then, she heard the loud screams once again. It took her a moment to realize that they were coming from her own mouth.