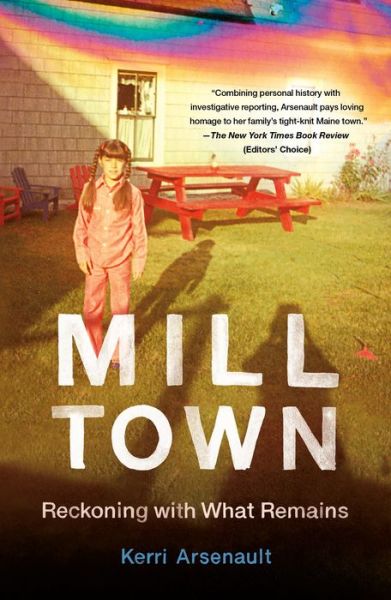 WHAT GOES AROUND, COMES AROUND

FROM THE PORCH steps of the house where I grew up, you’ll see the end of the road. There, the pavement dips down to reveal the town’s only traffic light, a gas station, and the roof of the Family Dollar store. Behind the store lies the Androscoggin and just beyond the river, the paper mill’s largest smokestack emerges like a giant concrete finger. From anywhere in town, you can orient yourself to this stack, or by the ever-present ca-chink ca-chink ca-chink of the mill’s conveyor belts, and find your way home even from a pitch-black walk in the woods. When mill shutdowns occur for holidays or layoffs, the smokeless stacks resemble the diseased birch trees dying throughout New England.

To the right of the porch you’ll see a street of clapboard homes, silent but for the occasional snarl of a jake brake on a logging truck or a motorcycle shifting gears. A mile or two out of town, the road narrows, and small creeks knit through pastures shadowed by hills, a working farm or two, a long straight road, and cut hay, muddy cow paths, rotting leaves, or black ice, depending on the time of year. The seasons, they calendared our lives.

Farther up the road you’ll eventually bump into the North Maine Woods. If you look at a map, you’ll get an idea of the yawning jurisdiction of the area, which lies (generally) within the twisted pavement of Route 2, Interstate 95, and the Canadian border, their lines lassoing the wilderness within. The Woods are a deluge of spruce, fir, hemlock, and beech, a steady brown and green canopy fractured by silvery brooks or iron gray lakes. The damp mossy understory and thick brush, claustrophobic with tangled twigs and scant cabins, hide the chewed-up dirt logging roads that colonize the backcountry. I didn’t pay much attention to those darker, deeper woods because there were already so many trees right in our backyard.

My mother stayed home while my father worked: her making pot roast, him making smokestack money. As kids, we explored the world through textbooks and made classroom dioramas of what we thought a Mayan village or a Midwestern dairy farm looked like. The rest of the world seemed to be New Hampshire or Canada. Families didn’t go on overseas vacations and rarely traveled interstate. Our lives were focused inward … Red Sox games, union strikes, and grousing about the weather.

Monumental philosophical ideas were surfacing across America—feminism, environmentalism—however, there were no movements in Mexico but for people walking across the mill’s footbridge to work. We were more likely to dry bras on a clothesline than burn them. We lived in a Shrinky Dink world where everything was there, just smaller. We were lucky in this, felt safe with our doors unlocked at night, and ameliorated most of our sins within the latched doors of St. Theresa’s confessional. At nighttime football games, we watched our fire-twirling majorettes toss their batons skyward in a spinning, blazing fan. They caught them dead center every time. Those kerosene-soaked batons in the dusk of autumn, they smelled of permanence.

From October to April, oil-burning furnaces heaved in our basements while outside, the violence of chainsaws making firewood meant things were getting done. Winter insulted us with frequent storms that hurled wet pillows of snow into our faces or horizontal pellets of icy rain onto our footpaths. In a weekly dirge, we’d crack the ice on the walkway or throw one fat shovelful of snow after the other into white pyramids while our breath funneled out in smoky vapors. Passers-by on their way to work, unrecognizable in the bulk of their warmth, would wave a shallow hello as we huffed through our chores. As people and winter lumbered along, sidewalks became glacial, leaving everyone to walk in the middle of the road. We all complained, yet nobody ever thought to leave. Weather was just something we endured.

One year blended into the next with only slight differences in star athletes or town leaders and sometimes one turned into the other. Family businesses occupied Mexico’s Main Street, anchored by the Chicken Coop—“Good Eatin’ That’s Our Greetin’!” their tagline declared in flat red paint. The Bowl-O-Drome, Lazarou’s car dealership, WRUM, RadioShack, Dick’s Restaurant, the Dairy Queen, the Far East Restaurant (the “Chinah Dinah”), a carwash, and Maddy’s Pizza murmured with people doing their thing. Businesses opened and closed with the seasons and the sun. Before my time, Boivin’s Store, Stanley the grocer, T.M. Stevens Dry Goods, a theater, a livery, a dowel mill. Once there was even a hotel. At the rim of town, the mill footbridge, where three generations of my family and exponential relatives crossed, as did most millworkers who spread cretons on their toast before clocking in. We were stamped out like Christmas cookies, as good French Catholics were.

Everything else we needed was in Rumford, the larger of the two connected towns and the commercial center of our community. At times there were deep rivalries and frictions between Rumford and Mexico, but we were always tethered by blood, two bridges, a dependency on the mill, and by around 2009, schools and a single grocery store.

Overall, what we needed we had. Everyone knew everyone and we liked it that way—for what other way was there? It was quite the place, my mother always says. There was never any reason to leave. In our nuclear family of seven, we always had enough food, plenty of hand-me-downs, some spanking, and an unspoken love for each other, because frankly, nobody really spoke much about love at all.

In the drowsy dusk of summertime when the sun dipped under the foothills and the humidity of the day invaded kitchens and bedrooms, people flocked to their porches. There, they chatted while night knit itself into a tight blanket. As the sun sank, one by one, mimicking fireflies house lights flicked on and porch lights flicked off and people streamed inside for the evening. The sounds of clinking dishes, faint music, vehicles purring, and light-as-vapor laughter scented the air. Night fell like a bruise.

During those school-less summer days, I often sat on the dusty curb in front of our house and counted the out-of-state license plates as they sped by on their way to somewhere else. When I could finally drive, I’d cruise around with other teenagers, pivoting our used Monte Carlo in the Tourist Information Booth parking lot before another revolution through town. My parents thought the Information Booth was where all the “druggies” hung out, but really it was a harmless venue in a small town with nothing else to do but drive around in circles.

My parents shaped their own well-worn paths. While my father walked back and forth across the mill footbridge to and from work, my mother lugged laundry up and down the cellar stairs, day after day, one skinny arm cradling the laundry basket, her free hand gripping a Vantage, a cigarette brand whose packet featured a bull’s-eye graphic design. With a screech and a whack, the screen door would slam shut after she elbowed it open. She would dump clean laundry on the kitchen table, snap each article of clothing three times, fold them sharply into tight wedges of fabric, and stack them like the reams of white paper my father brought home from the mill. When the screen door wore out, my mother replaced it with a new one that already came equipped with a squeaky spring. She left it defective, announcing herself into infinity with only my father to hear. His hearing, long dulled by the hum of paper machines, was the perfect match to her perpetual clamor. My mother, she’d let her Vantage expire before finishing it and send me to fetch her a new pack from the corner store. I’ll time you, she’d say. Now GO! And off I went. She didn’t need to tell me twice.

Things stayed in this balance, with minor adjustments every now and then, until America’s working-class towns started to ebb alongside the industries that nourished them. The future? We knew nothing of it. Our horizon trembled like a fragile convex meniscus, brimming away from the landscape that held it. All of what was before us was not as bright as what had passed.

I LEFT MAINE in 1985 after graduating from high school to attend Beloit College in Wisconsin, where an oily, vomit-like smell—the “cheese breeze”—gusted from the nearby Frito Lay Cheetos factory. Even in the funky scrum of Wisconsin air, I believed I had left my past behind. All the old ways and places fell out of view. Little did I know there were armies of us across America who felt this way: hopeful young adults from small towns who were trying to find our way, another way. What none of us foresaw, however, as we marched down those roads not taken by our parents, is that leaving home can be as complicated as living there and as inescapable as our own DNA.

After college, I lived in dozens of places and rotated through dozens of low-wage jobs: short-order cook, cocktail waitress, ski coach, dishwasher, nanny, graphic designer, shipping manager, chairlift operator, gardener, copywriter, high school gym teacher, real estate assistant, to name a few. In 2001, I married a US Coast Guard officer, but in 2009 a permanent job and home still remain out of reach. His duty stations, while not always perfect, are always determined by a perfect stranger (his military detailer), so the only constant in our mobile life is that we are constantly mobile. With him, I slingshotted around the world and back only to return home each time with a dimmer sense of “home,” though my parents still live in the same house and my four siblings have settled in the Northeast. I keep returning to Maine, of course, but my visits are always focused affairs: holidays, weddings, family birthdays or anniversaries, and funerals like my grandfather’s, which brings me home now, in April 2009.