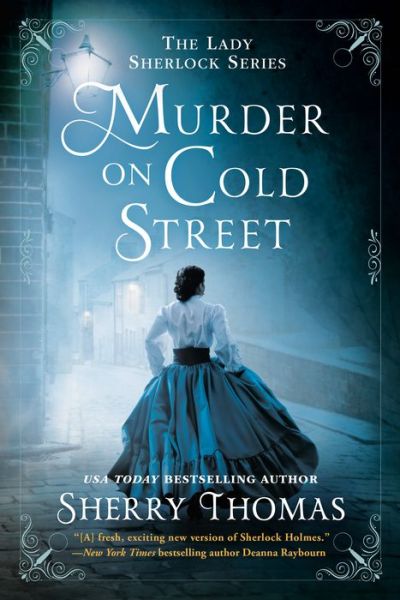 Lord Ingram stared at Holmes. The dichotomy in her question, as if the truth and Inspector Treadles’s freedom were mutually exclusive . . .

Mrs. Treadles’s jaw worked, then she squared her shoulders. “Both, Miss Holmes. The truth of the matter will lead to the arrest of the true culprit and my husband’s release from police custody.”

She said it with a fervency that seemed to be more than conviction. She needed for her husband to be thoroughly exculpated by the thoroughly above-reproach Sherlock Holmes.

“Everything that you have just enumerated—Inspector Treadles’s lies to you on his whereabouts, his missing service revolver, and his omission of the fact that he had been on leave from Scotland Yard—do they not cast doubts as to what Sherlock Holmes might find out, if he looks closely enough?”

“They are not what makes my husband guilty. They are only what makes his innocence difficult to prove,” said Mrs. Treadles with a stubbornness that Lord Ingram found inexplicably touching. “Which is why we need Mr. Holmes’s genius, to bring the matter to a satisfactory conclusion.”

He cast a look at Holmes. She had managed to get to the truth of the matter in every case that had been entrusted to her. But truth had a vicious way of upsetting everything else on its way to the surface. And he was hard-pressed to say, as someone whose existence had been repeatedly convulsed by recent overdoses of truth, whether there had been anything satisfactory to the aftermaths.

“In that case, if you will excuse me, I will consult my brother.”

She left in a flounce of velvet and lace. Lord Ingram stared for a moment at the bedroom door, closing behind her, then took a sip of his tea, which had become thoroughly lukewarm. He undertook the making of a fresh pot, glad for an excuse not to sit still.

But something as undemanding as putting a kettle over a spirit lamp didn’t excuse him from conversation. He was racking his brains for a suitable topic when Mrs. Treadles said, in an exhausted voice, “This is a very nice parlor.”

It was a nice parlor. Mrs. Watson, Holmes’s benefactress, possessed excellent taste and any room she had a hand in decorating was bound to be both lovely and comfortable. There were still rooms at Eastleigh Park, the Duke of Wycliffe’s country seat, that the current duchess had not bothered to alter, because when Mrs. Watson had been the late widower duke’s official mistress, she’d remade them so admirably.

But at this moment, Mrs. Treadles could scarcely have any real interest in the color scheme or furnishings of 18 Upper Baker Street.

Even with the catastrophic turn of her own fortunes, she didn’t want him to feel awkward.

Although—the last time he was in this parlor, Holmes had managed to overturn his life.

“Have you eaten anything since Sergeant MacDonald’s visit?” he asked.

When she had first appeared in Mrs. Watson’s home, wild-eyed and short of breath, he’d thought she must have just learned of her husband’s arrest and rushed over. But hours had passed since that heart-stopping moment.

“I understand not feeling hungry. And I understand that at the moment, everything else feels more important than nourishment. But please believe me when I tell you, Mrs. Treadles, that these will be some of the most demanding days of your life. And it is the least you must do, to treat yourself with as much care and courtesy as you would a horse carrying you on an arduous journey.”

He set a plate of holiday cake before her. She liked a good fruit cake, she’d once said in his hearing, because the taste made her remember happy childhood Christmases. “Allow me to be useful as a nursemaid, my dear lady, since I cannot do anything else at the moment.”

She blinked rapidly—he realized with astonishment that she was holding back tears at his utterly insignificant gesture. She picked up the piece of cake and took a bite, smiling bravely. “I’d like to say that I’m following your sage advice because I’ve come to my senses. But right now I’ll probably blindly obey any kindly voice of authority, if only to no longer be responsible for everything myself.”

His heart ached for her: She had been exhausted long before catastrophe struck this morning. “Decisions are taxing—far more than I ever imagined they’d be, in those days when I longed to make all the decisions.”

She took another bite of her cake. “I hope Sherlock Holmes is excellent at decisions.”

He nodded with wholehearted endorsement. “Extraordinarily so. As is Miss Holmes, in fact.”

“Do you have any guesses as to what Mr. Holmes will have us do?”

“No, but I’ve come to expect the unexpected.”

She turned her plate in her hands, as if she wasn’t sure whether she ought to ask her next question. “Robert said you were impeccable in your conduct at Stern Hollow. But were you—were you at all afraid?”

He also didn’t answer immediately—the memories brought back a sensation of cold that had nothing to do with the December day outside. He suppressed a shiver. “I was deathly afraid.”

“Even though Mr. Holmes had sent a brother to help you?”

Even though Holmes, in the guise of that brother, had been there in person, fighting for his life.

“Had I been an outsider looking in, I would have had full confidence in Holmes’s capability. But I was the prime suspect, I was the one all the evidence pointed toward, and I felt as if I were drowning. Even having Mr. Sherrinford Holmes at Stern Hollow didn’t change the fact that I was barely holding my head above water in rough seas. But he was the lifeline I held on to and eventually he pulled me ashore.”

Mrs. Treadles looked toward the door through which Holmes had disappeared. “Do you think,” she asked tentatively, “that Sherlock Holmes can do the same for Inspector Treadles?”