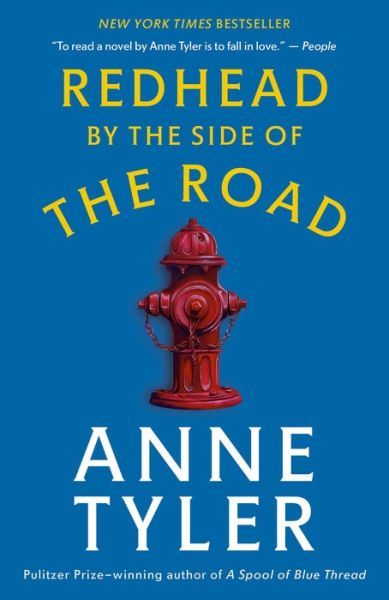 ADA AND HER FAMILY lived in Hampden. The houses on their block were small and plain but extremely well cared for, because most of the inhabitants were carpenters or plumbers or such and they had their standards. Unfortunately, though, the streets nearby had started filling up with fancy new restaurants and la-di-da boutiques, and this meant a sudden traffic problem throughout the neighborhood. Micah had to hunt awhile for parking, and he ended up in a questionable spot where his rear bumper protruded a teeny bit into an alley. So he was feeling a little distracted when he arrived at the house.

The yard here was not much bigger than two doormats, one on either side of the walkway, and Ada’s husband kept it meticulously maintained, the grass mown down to mere fuzz and not a single autumn leaf floating in the fiberglass birdbath. But Ada, like all of Micah’s sisters, had a boundless tolerance for clutter. Micah had to swerve around a skateboard and a sippy cup on his way up the front steps, and the porch was strewn not only with the standard strollers and tricycles but also with a pair of snow boots from last winter, a paper bag full of coat hangers, and what appeared to be somebody’s breakfast plate bearing a wrung-out half of a grapefruit.

In the foyer (which he entered without knocking; nobody ever knocked, and anyhow, it wouldn’t have been heard in all the ruckus), so many sneakers lay heaped on the floor that you would think the house had a no-shoes rule, although it didn’t. A mahogany side table held a lamp and a pair of pruning shears and a bottle of nail polish. No doubt the living room was equally disorganized, but you couldn’t tell, because it was filled wall-to-wall with people. His twin sisters, Liz and Norma (who looked nothing alike—one thin and one fat), were making a fuss over Ada’s youngest grandson; and Liz’s husband, Kegger, was talking on his cell phone near the window; and a couchful of teenagers sat watching a game of some kind on the giant flat-screen TV. Micah didn’t see Joey or any bride-to-be type of person, but maybe they were lost in the crowd. The general impression, as always, was tumult: noisy, merry, unkempt people wearing wild colors, dog barking, baby crying, TV blaring, bowls of chips and dips already savaged.

Ada’s husband was the first to notice Micah. He was a burly, gray-bearded man with a denim apron strained tight across his beachball stomach, and he appeared in the dining-room doorway holding a foot-and-a-half-long spatula. “Bro!” he shouted. “High time you got here!” Behind him came Ada, big-boned and brightly lipsticked beneath a frizz of dyed red hair, bearing a magnum of chardonnay. “Hey, hon!” she said. “Where’s Cass?”

“Oh, she…had another engagement,” he said.

“Well, shoot. You want some wine?”

She turned to scan the crowd. “Joey must be out back,” she said. “Oh, but, Lily! Come over here, sweetie!” She was speaking to a pale young towheaded girl whom Micah hadn’t noticed before. “Like you to meet my baby brother, Micah.”

“How do you do,” Lily said, and she approached holding her hand out dutifully, like a child minding her manners.

Her hand was small and very cold. She wore plastic-rimmed cat’s-eye glasses and a great deal of jewelry—chandelier earrings, rhinestone barrettes, bangle bracelets, a double strand of beads as well as a large oval brooch, everything in some shade of blue to go with her dressy blue dress. Micah had the impression that this was the first time she’d been out on her own among grown-ups.

“Do you ever shop there?” Lily asked Micah.

“Well, I’m at the Customer Care counter, if you happen to stop by sometime.”

“Yes, Joey tried working in produce awhile, but I don’t think food management turned out to be his thing.”

“I stayed just long enough to ask Lily out for a burger,” Joey said, materializing next to her. He set an arm around her shoulders and asked Micah, “Don’t I know how to pick ’em?”

“You’re a lucky man, all right,” Micah said. He was thinking that Joey—pink-faced and chubby, wearing a sweat suit and purple Crocs—seemed dressed for a whole different occasion from the one Lily had dressed for. But she beamed up at him adoringly and let him pull her sideways against him.

“Uncle Micah’s an IT guy,” Joey told her. “He’s got his own company and all.”

This implied that Joey had still not found his chosen line of work, which was a troubling thought if he was about to get married. But Joey smiled confidently and said, “Sure! I could do that.”

Someone pushed a cold beer can into Micah’s hand—Suze, the youngest of his sisters and the one he felt closest to. “Did you not bring Cass?” she asked him.

“She had something to do,” Micah said. And then—because he might as well get it over with—“In fact, I think we’ve broken up.”

The words cut through the babble like a knife. Everyone fell magically silent and looked at him.

“But we loved Cass!” Ada said. “You are never, ever again going to find anyone else as right for you!”

“Durn, I wanted Lily to meet her,” Joey said. And then, turning to Lily, “You’d have been crazy about her.”

Someone on the TV was announcing a substitution—“Going to bring in Hawkins to replace the injured Kratowsky”—but the teenagers on the couch were all watching Micah instead. One of them—Norma’s daughter, Amy—said, “She was going to help me with my college application!”

It didn’t work. Everyone went on staring at him.

“Could you not try to get her back?” Ada asked. (Wouldn’t you know that she would assume the breakup was Cass’s idea.)

And “Tell her you’ll change your ways,” Phil advised him.

This made them all start laughing; he didn’t know why. Nor did Lily, of course. She looked from him to the others, and then at him again. Joey told her, “Uncle Micah’s kind of…finicky.”

“I am not finicky,” Micah said.

“What day is it today, Micah?” Suze’s husband called from the foyer doorway. He had a small child on his shoulders; her flounced skirt encircled his neck like an Elizabethan ruff.

“What do you mean, what day? It’s Thursday.”

“He doesn’t mind! Is it window-washing day?”

“Kitchen day! Ha! Your kitchen has a day all its own?”

“And what does that involve, exactly?”

“What?” Dave said. “I’m only trying to understand, is all. What on earth needs doing in his kitchen? Any time I’ve seen it, we could eat off the floor.”

“It’s not floor-mopping day,” Micah said. “It’s kitchen day. On kitchen day I clean the counters and the appliances and such. And one complete cabinet.”

They laughed again, and Micah gave an exaggerated scowl. He wasn’t sure why he played along with them like this. (Even encouraged them, some might say.)

Suze said, “Never you mind, Micah. We’re just going to pretend my husband has some manners. Teasing a man when his girlfriend has ditched him! Ada, is it not time to eat yet? Let’s have supper!”

“Yes, come to the dining room, everyone,” Ada said, and she let go of Micah and turned to lead the way. “When Robby needed help with his reading,” she told Lily, “—that’s Nancy’s oldest, my grandson—Cass stepped right up to help. She’s a teacher, you know. We worried Robby might have a learning disability, but Cass was so patient with him! And that was all he needed, it turned out. Oh, everyone thought the world of her.”

Micah felt an unexpected flash of resentment. Cass wasn’t perfect, for pity’s sake! She could have just let him know straight out if something was bothering her, instead of brooding about it in silence. And anyhow, shouldn’t his family be on his side, here?

Redhead by the Side of the Road: A novel
Anne Tyler
Shop Now