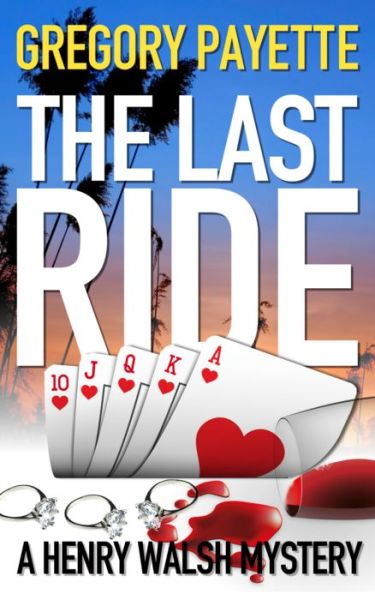 I ONLY KNEW WHAT ANGELA Thompson looked like from a picture Bob Campbell had left with me when he said his good friend—Angela’s ex-husband—had been killed while out riding his bike.

I met her at Barrington’s, a restaurant downtown for people a lot fancier than I was. If you liked fifteen dollar drinks and big plates with barely enough food to fill a space between your teeth, then Barrington’s was your place.

I spotted Angela as soon as I walked into the bar area towards the back of the restaurant. From where I stood, she looked as good as she had in that picture. From the far end of the bar, she gave me a nod and raised her martini glass my way. She sipped from it as her eyes followed me from over the rim of her glass.

“Angela?” I said as I walked up behind her, even though I knew it was her.

She turned in her seat and held her look on me for a moment. “You must be Henry.” She reached out and shook my hand.

“Sorry I’m late.” I looked around the long, u-shaped bar that wrapped around the room, separated from the rest of the restaurant with tall green plants and a fish tank the size of a small car. Most of the people at the bar were dressed business-like, although ties were loose, if they wore them at all.

Maybe I was under-dressed in my Sperry Topsiders and a short-sleeved shirt. At least it had buttons.

Angela looked at her watch and straightened it on her wrist. “You’re right on time.”

I rested my hand on the black leather stool next to her and noticed a glass of ice half filled with a gold colored liquor—whiskey, I assumed—and said, “Is someone—”

Before I could finish a hand reached past me and grabbed the drink. “Excuse me,” said the man just behind me.

I turned and looked up. He was an older gentleman, maybe the only other person at the bar not dressed like he’d come from a corporate meeting. “I’m sorry,” I said and stepped out of his way. “Your seat?”

He shook his head and put his warm, heavy hand on my back. “No, please. Go ahead. I’m leaving as soon as I finish this.” He held his glass as if making a toast and took a sip.

“Sit down, Henry. Roy’s been ‘just leaving’ for an hour now. You don’t take his seat he’ll never go home.” She winked at Roy and raised her glass, taking a sip of her martini.

The man extended his hand to me and didn’t seem to want to let go. “Roy Mason.”

Roy was one of those men who held onto the handshake a little too long, like it was a manhood contest he wasn’t going to lose.

I pulled my hand back and gave him a nod.

I looked at Angela, as if I needed her approval to speak. I wasn’t sure how much Roy’d already known.

I slid into the seat and turned my body to face Roy, my elbow resting on the back of the stool.

Roy nodded. “We were more than just friends,” he said, twisting two fingers together. “We were like this.”

“I’m sorry about your loss,” I said. I glanced back at Angela. “Both of you.”

Roy shook his head. “Wouldn’t have met a more cautious man. Sometimes a freak accident is all it takes.”

I looked back and forth, feeling a little uncomfortable with Angela to my left, Roy standing behind me holding a drink in his hand.

Angela put her hand on my arm. “Roy can’t help but side with the Sheriff’s Office…he’s got enough friends over there.”

“I mean calling it a freak accident. Roy happens to believe I’m wasting your time.” She turned and faced the bar with her back to Roy. She turned her head and looked over her shoulder. “Doesn’t hurt to make sure the truth is the truth.”

Roy looked at me and shook his head. He threw the rest of his drink back and slid the glass across the bar. “I’m leaving. For real this time.” He gave me a nod. “Good meeting you.” He leaned in towards Angela and kissed her on the back of the head. “We’ll catch up later.”

She gave him a casual wave without turning around to look at him. “Bye Roy.”

I watched him walk past the tall plants and past the fish tank, heading towards the door. He had a limp in his step and held his shoulders back, his arms hanging straight back, swinging back and forth behind him.

“Like I told you on the phone,” she said. “I’m on an island with this. Nobody wants to hear it. Like they all just want to put it away and ignore the facts just because the Sheriff’s Office considers John’s death nothing more than—as Roy said—a freak accident.”

Angela waved over the bartender. “Kyle, this is Henry.”

Kyle and I exchanged a nod.

“Get him a drink, will you?” She tapped the top of her glass. “I could use a refresh myself.”

Kyle wiped his hands with the towel he had draped over his shoulder.“What would you like?”

“Jack Daniels. Just two ice cubes.” I put two fingers in the air, just to make sure he understood.

I turned to Angela. “Would you like to tell me more about what happened to John? At least what you know so far?”

She nodded. “You want my version or—”

“Just tell me what you know happened,” I said.

Angela looked down into her glass, took a moment then raised her eyes towards me. “John was my ex-husband. I guess you know that. And you might be wondering why his ex-wife is the one hiring a private investigator.”

I shrugged. “I was wondering, but I’m not sure it matters.”

“John and I were close. We were business partners, but we were more than that. We weren’t lovers. Not at all. I don’t know if we ever were. Just two kids out of college who started a business together.”

“That’s where you met Bob, in college?”

Angela nodded. “Bobby and John were good friends. I don’t know what happened over the years. But, of course, he’s the one who insisted I talk to you.”

“Twice. His widow was number three.”

Kyle brought me a glass of Jack Daniels but it was filled with enough ice I wondered if he thought I’d ordered a snow cone.

Angela looked down at my glass. “I heard you say two ice cubes.”

I shrugged and took a sip. “That’s why I drink on my boat or at a bar where I know the bartender.”

She gave me a look. “You don’t get out much.” Angela waved for Kyle and gestured for him to come towards her. She leaned into me. “It shouldn’t be that difficult.”

“Kyle,” she said as he stood in front of us. She pointed to my drink. “Would you mind giving my friend here what he’d asked for?”

Kyle looked down at the glass, looked at me, then shifted his eyes to Angela. “He ordered a Jack Daniels.” He turned to me again. “Didn’t you?”

“He did ask for a Jack Daniels. But he specifically said he wanted two cubes of ice.” She nodded towards my drink. “Does that look like two cubes of ice?” She picked up the glass and handed it to him. “Five minutes from now it’ll be a Jack and water.”

I gave Kyle a look, part of me feeling bad for him and part of me thinking she was right. It wasn’t that hard. Yet it was always a challenge for bartenders when I asked for two cubes of ice.

Angela sipped the martini Kyle had put down in front of her and held it just under her chin, holding the glass by the stem. “You want something a certain way, you ask for it. You don’t get it, you demand it.”

Kyle put the glass down in front of me and walked away.

I took a sip and thought about what it might be like working for Angela. If things didn’t go how she’d expect, would she come down on me the way she did with Kyle for messing up a simple drink? Probably harder. Much harder. I had to weigh if there was anything to this case and if it’d be worth it.

“I don’t know how much you already know, other than what I already told you on the phone, but I might as well start from the beginning.” Angela turned her body toward me, her skirt hiked up past her bare knees, up against my thigh. “John was what you might consider an avid biker.” She picked an olive from her drink and popped it in her mouth, leaning with her elbow on the bar and her chin in her hand. “He rode more when he was younger, but he was still riding two, three times a week. He never missed a Sunday ride…that was his favorite day. No matter what—rain or shine—John would be out there at seven a.m.”

“He always ride his bike at Losco Park?” I said.

“Yes. John liked the dirt trails, even at his age.” Angela finished what was left of her martini. She raised her hand. “Kyle?” When he turned, she tapped the top of her glass. She looked at me. “You want another?”

Before I answered, she said, “Get Henry another one.”

I finished what was left in my glass. “Can you tell me what happened that morning? At least as far as you know?”

“He got up like he did every other Sunday morning. But that was his last ride. Two boys found John on the edge of a pond. He’d gone down the side of a hill—a cliff of some sort—and according to the report, hit his head more than once. When they found him, he was face down in no more than four inches of water.”

She shook her head. “His death was caused by the head injuries. It was a very rocky area, and the fall was fairly steep.”

“You went out there, to where it happened?”

She nodded. “Roy took me out there. I wanted to…”

Kyle put our drinks down in front of us. He pointed to my glass and held up two fingers. “Two cubes.” He gave me a smirk.

I opened my mouth to say thanks, but didn’t bother.

“John wore that helmet every time he rode his bike. He was adamant about safety. I mean, we’re in the insurance business. We’re all about minimizing risk.” She straightened out in her seat, faced the bar and picked up her martini with both hands. She took a sip but kept her eyes straight ahead.

She turned to me and forced a smile, her lips pressed tight together. “John would’ve worn that helmet to bed if it didn’t mess with his sex life. To me, it just doesn’t make sense.”

“They found his helmet though, near the trail.”

She nodded, but didn’t say a word.

My elbows down on the bar with my glass in my hand, I turned to her and said, “Is there anything else? I’m not saying the Sheriff’s Office has it right. But I’m far from being at a point where I can advise you or tell you what I think. But, again, if there’s anything else you can tell me…anything about why you think—”