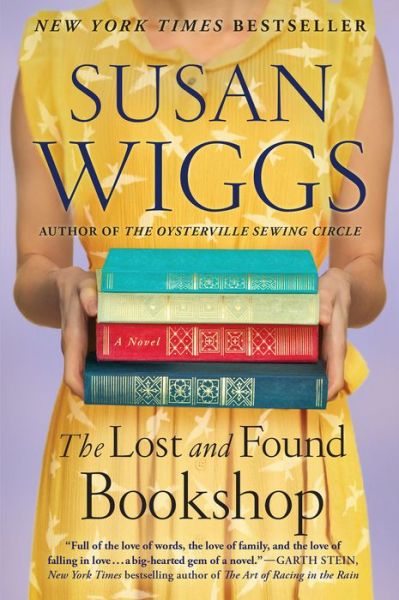 Andrew Harper’s wife left him on a Monday. He would always remember it was a Monday, because that was the day May Lin delivered the finished laundry, crisply folded and wrapped in a paper parcel. Then she would pick up the week’s bag, marked Harper and tagged with Chinese characters.

The bag of soiled items was considerably smaller without Lavinia’s clothing. She had packed everything in a battered steamer trunk she’d made him drag up from the basement. The trunk was a mysterious family heirloom that had once belonged to Colleen O’Rourke, the grandmother he’d never known. Colleen had migrated from Ireland in the 1880s, arriving at the age of fifteen. She had found work as a maid in the very building that was now the bookstore, somehow making her way in the world alone.

Now her trunk would be traveling with the gloriously beautiful Lavinia, not on a steamer but on a train to Los Angeles, where her rich lover had promised to give her the life she always claimed she deserved.

Her farewell to Andrew and Blythe had been terse. “I can’t be happy here,” she had said that Monday morning as the taxi driver loaded the trunk into his bulbous Plymouth van. “You’ll be better off without me.”

Blythe, less than a year old and still in diapers, had gurgled and clapped her hands, a string of teething drool pooling on Andrew’s sleeve. The radio was playing that inane Sonny and Cher song, “I Got You Babe.” The baby reached both starfish hands out to her mother. Lavinia paused, but the brief flicker of hesitation in her eyes quickly hardened into icy resolve.

A few moments later, May Lin arrived with the laundry delivery. Andrew was still standing in the middle of the shop, frozen, surrounded by his customers’ typewriters, cash registers, and adding machines, with Blythe snuggled against his chest.

The sight of May thawed him out. He and May had fallen in love as teenagers, but her family forbade her to be courted by Andrew, a gweilo. His own parents had not forbidden it, but they’d warned him that there could be no easy future with a Celestial—their archaic term for Chinese people in America. May Lin entered an arranged marriage to an older man from her father’s district in China. He had a laundry, he needed a wife, and that was that.

Heartsick, Andrew had sought solace in the arms of Lavinia. She was stunningly beautiful, and when she got pregnant, he was foolish enough to believe the sense of obligation that bound him was a kind of love.

Each week, when he and May saw each other, they rarely spoke. They didn’t need to, because they knew each other’s hearts without words.

And little Blythe became the center of his world. His ray of sunshine, he called her, a black-eyed Susan of a child who sang songs and read stories all the livelong day. She had a little rocking chair right next to his by the dormer window in the sitting room, and he could still remember the way the evening light used to slant through the window, settling over her like a benediction while she was absorbed in a book.

As the years passed, they had their ups and downs, but the core of their relationship was a fierce, protective love. He taught her touch-typing and watched her win spelling bees. Though the teenage years mystified him, he indulged her yearning for pretty clothes and baffling tubes of makeup. For the father-daughter dance in high school, he’d taught her a passable foxtrot, and she had lamented that he’d set the bar too high for any boy to reach.

He harbored no regrets about the way things had unfolded. He had the world’s most wonderful child and enough common sense to know, finally, that love took the heart by surprise. Lavinia was gone, but she had left behind the very best part of herself. Of them both.

“It was just the two of us,” Andrew told the gathering at Blythe’s memorial. Their faces were a distant blur, but memories stood out clearly in his mind. “She was my daily joy. It’s probably hard for you to imagine, but there was a time when the Lost and Found Bookshop was a typewriter showroom, with a letterpress printing operation in the basement. I made my living by fixing the very things a writer uses every day. Founding the bookshop was Blythe’s idea, and it was a great adventure for us both.”

The day Blythe went away to college, Andrew thought he might die from missing her. It was just across the bay in Berkeley, but it might as well have been in Timbuktu for all his lonely heart knew. He lived for the weekends when she would come home with high-flown ideas in her head and a collection of dirty laundry in a faded cloth bag, still stenciled with their name and Chinese characters. His typewriter business was in sharp decline thanks to the computer revolution, and he spent most of his days reading the antique books someone had left in the basement decades before. He became an expert at restoring the rare volumes, which he displayed in a glass-front barrister case. Every once in a while, a collector would come in and buy one of the books, and the enterprise became more than a hobby.

Four years later, Blythe returned home with a bachelor’s degree, a broken heart, and an unexpected pregnancy. She tearfully confessed that she had fallen in love with a teaching assistant who had promised her the world. She’d believed him, in her hopeful, romantic way, imagining a life of adventure with the young doctoral candidate.

Then she discovered in the most hurtful of ways that the man was already married and had three children.

Andrew’s private, selfish secret was that he couldn’t thank Dean Fogarty enough. The man who had broken his daughter’s heart had given Andrew a new purpose. Blythe had needed a way to provide for herself and her child. Andrew needed a fresh direction in life. Together, they had founded the bookstore, both energized by the prospect of creating a future for themselves and little Natalie.

He looked out at the gathering once again and brought the present moment into focus. Familiar faces, names lost in the cobwebs. There were ghosts as well, people who had left, yet remained a lingering presence in his mind. He had a fanciful thought that somehow they offered Blythe a loving welcome into their midst.

Please let it be true, he thought.

The rest of his eulogy was brief, highlighting the things he loved best about Blythe, the things he would miss the most. He knew the words were not enough, but they were all he had to pay tribute to his one and only child.

“I am quite certain I will never laugh without hearing her laugh. I will never smile without seeing her bright smile. I’m grateful to all of you for being a part of her brilliant, precious life. I feel sorry for those who missed out on knowing this exceptional person.” A gasp of sorrow built in his chest and he paused, then spoke again. “In a moment, you’ll hear from another exceptional person. Of all the gifts my daughter gave to the world, the greatest is her own daughter, Natalie.”

Andrew kept himself steady as he stepped back, though his knees threatened to give out. A new song started up, Natalie accompanied him back to his seat, and he sank down with as much dignity as he could muster.

Her tears were silver tracks of grief salting her achingly lovely face. Blythe’s face. One and the same, and maybe this was the reason he was confused sometimes. He held tightly to the top of the cane as “What a Wonderful World” filled the hall. He didn’t really need the cane, but by now it was a habit. And maybe a way to keep himself from drifting away forever, on a raft of unutterable sadness.

Natalie didn’t sing along with the rest of the gathering as she awaited her turn at the podium. Instead, she time-traveled, trying to visit her mother in a different era, trying to bring her back to life.

When Natalie was little, her mother had dwelled at the bright center of her world, an incandescent force organizing their lives around books and ideas.

Even at a very young age, Natalie had understood that this was unusual. That their family was unusual.

She remembered a time when she was in the fourth grade—Mrs. Blessing, California History—and came home in a quandary: “We’re doing family trees in school,” she told her mother, “and I feel weird about mine.”

“Why do you feel weird about it?” Blythe quite frequently responded to Natalie with a question about her feelings. She read tons of parenting books and got all kinds of ideas from them.

“Kayla says we have an alternative lifestyle. She told everyone at recess that means we’re freaks.”

“You say that like it’s a bad thing,” Mom remarked, smoothing her hand over the pages of an antique book. She liked to display the most special collector’s items in a lighted glass case under the counter. People who wanted a closer look had to ask, and they had to wear white gloves when they touched the pages.

“Is it a good thing?” asked Natalie.

“What it is,” Mom said, finally looking up, “is none of her goddamn business.”

Natalie always felt a little forbidden thrill when her mother swore. She didn’t do it often, because she said too much swearing watered down the effect.

“Sure, but brace yourself for the reaction.” Mom carefully placed the book in the case, laying it open to a page with an illustration of a bird. Then she went over to the coffee area and gave Natalie a cookie from Sugar, the bakery across the street, and poured her a glass of cold milk. It was their afternoon ritual each day when Natalie got home from school.

Blythe set the tray on a tiny table in the coffee area. She often said she wanted to make more room for coffee to serve to customers but didn’t want to sacrifice shelf space for the books. “I love our family. And I know you do, too. Just because it’s not like other families doesn’t mean a thing. It certainly doesn’t mean we are freaks.”

Natalie took the city bus to school. Her friends had carpools, some of them with drivers in polished chauffeur’s livery. Mom didn’t even have a car. Natalie’s friends all had fathers. Or stepfathers. Or two mothers. Or two dads. She had only ever met her birth father a couple of times. His name was Dean Fogarty, and she didn’t like him much. Mainly because he didn’t seem to like her. Mom called him her biggest mistake that had resulted in her greatest accomplishment. “He gave me you, Nat,” Mom would say. “So I can never have any regrets.”

Natalie took a bite of the soft, sugared ginger-molasses cookie. She wasn’t sure being someone’s greatest accomplishment was as important as it sounded.