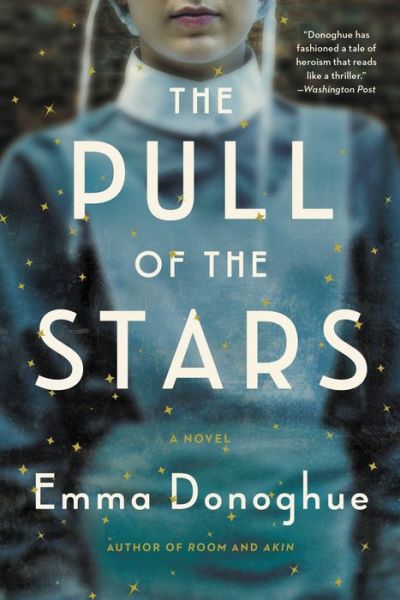 STILL HOURS OF DARK to go when I left the house that morning. I cycled through reeking Dublin streets that were slick with rain. My short green cape kept off the worst, but my coat sleeves were soon wet through. A waft of dung and blood as I passed a lane where livestock were waiting. A boy in a man’s coat shouted something rude at me. I pedalled faster, past a motor car creeping along to eke out its petrol.

I left my cycle in the usual alley and clipped the combination lock onto the back wheel. (German manufacture, of course. How would I replace it when its mechanism rusted up?) I let down the side tapes of my skirt and took my rain-soaked bag out of the basket. I’d have preferred to cycle all the way to the hospital, and it would have brought me there in half the time the tram took, but Matron wouldn’t hear of her nurses turning up in a sweat.

Emerging onto the street, I nearly walked into a disinfection cart. Its sweet, tarry tang marked the air. I ducked away from the masked men who were spraying the gutters and feeding their hose through the grating of gully after gully.

I passed an improvised war shrine—a wooden triptych draped with the Union Jack. There was a chipped azure Virgin Mary for good measure and a shelf below overflowing with decaying flowers. The names painted on were just a few dozen Irishmen out of the tens of thousands lost so far, out of hundreds of thousands who’d enlisted. I thought of my brother, whom I’d left at home finishing a piece of toast.

At the tram stop, the pool of electric light was becoming watery as dawn approached. The lamppost was pasted with advertisements: DEPLETED AND DEBILITATED FROM LIVING TOO QUICKLY? FEELING OLD BEFORE ONE’S TIME?

But I refused to flinch at the number. Thirty meant maturity, a certain stature and force, no? And the suffrage, even, now they were extending it to women over thirty who met the property qualifications. Though the prospect of voting felt unreal to me, since the United Kingdom hadn’t had a general election in eight years and wouldn’t till the war was over, and God alone knew what state the world would be in by then.

The first two trams whizzed by, crammed to bursting; more routes must have been cut this week. When the third came, I made myself push onto it. The steps were slippery with carbolic, and my rubber soles could get no purchase. I clung to the stair rail as the tram swayed through the fading darkness and hauled myself upwards. The riders on the balcony section looked soaked through, so I ducked in under the roof, where a long sticker said COVER UP EACH COUGH OR SNEEZE…FOOLS AND TRAITORS SPREAD DISEASE.

I was cooling fast after my bike ride, starting to shiver. Two men on the knifeboard bench moved a little apart so I could wedge myself between them, bag on my lap. Drizzle slanted in on us all.

The tram accelerated with a rising whine, passing a line of waiting cabs, but their blinkered horses took no notice. I saw a couple arm in arm below us hurry through a puddle of lamplight, their bluntly pointed masks like the beaks of unfamiliar birds.

The conductor inched along the crowded top deck now. His torch—a flat one, like a whiskey flask—spilled a wavering radiance over knees and shoes. I gouged the sweaty penny out of my glove and dropped it into his sloshing tin, wondering whether the inch of carbolic would really wash the germs off.

He warned me, That’ll only bring you to the Pillar.

So the penny fare’s gone up?

Not at all, there’d be ructions. But it doesn’t take you as far now.

In the old days I would have smiled at the paradox. So to get to the hospital…

A halfpenny more on top of your penny, said the conductor.

I dug my purse out of my bag and found him the coin.

Children carrying suitcases were filing into the train station as we swung past, being sent down the country in hopes they’d be safe. But from what I could gather, the plague was general all over Ireland. The spectre had a dozen names: the great flu, khaki flu, blue flu, black flu, the grippe, or the grip…(That word always made me think of a heavy hand landing on one’s shoulder and gripping it hard.) The malady, some called it euphemistically. Or the war sickness, on the assumption that it must somehow be a side effect of four years of slaughter, a poison brewed in the trenches or spread by all this hurly-burly and milling about across the globe.

I counted myself lucky; I was one of those who’d come through practically unscathed. At the start of September I’d taken to my bed hurting all over, knowing enough about this brutal flu to be rather in a funk, but I’d found myself back on my feet in a matter of days. Colours appeared a bit silvery to me for a few weeks, as if I were looking through smoked glass. Apart from that, I was only a little lowered in spirits, nothing worth making a fuss about.

A delivery boy—matchstick legs in shorts—whizzed past us, raising a peacock’s fan of oily water. How slowly this tram was trundling through the sparse traffic—to save electricity, I supposed, or in line with some new bylaw. I’d have been at the hospital already if Matron let us cycle all the way there.

Not that she’d know if I broke her rule; for the past three days she’d been propped up on pillows in a Women’s Fever ward, coughing too hard to speak. But it seemed sneaky to do it behind her back.

South of Nelson’s Pillar, the brakes ground and squealed, and we came to a halt. I looked back at the charred carapace of the post office, one of half a dozen spots where the rebels had holed up for their six-day Rising. A pointless and perverse exercise. Hadn’t Westminster been on the brink of granting home rule for Ireland before the outbreak of world war had postponed the matter? I’d no particular objection to being governed from Dublin rather than London if it could come about by peaceful means. But gunfire in these streets in ’16 hadn’t brought home rule an inch closer, had it? Only given most of us reason to hate those few who’d shed blood in our names.

Farther down the road, where firms such as the bookshop where I used to buy Tim’s comics had been razed by British shellfire during that brief rebellion, there was no sign of any rebuilding yet. Some side streets remained barricaded with felled trees and barbed wire. I supposed concrete, tar, asphalt, and wood were all unaffordable as long as the war lasted.

Eileen Devine, the barrow woman. Her flu had turned to pneumonia—all yesterday she’d coughed up greenish-red, and her temperature was a kite jerking up and down.

I tried not to dwell on my patients between shifts since it wasn’t as if I could do a thing for them until I was back on the ward.

On a fence, specifics of a variety concert with CANCELLED stamped diagonally across them; an advertisement for the All-Ireland Hurling Finals, POSTPONED FOR THE DURATION pasted on it. So many shops shuttered now due to staff being laid low by the grippe, and offices with blinds drawn down or regretful notices nailed up. Many of the firms that were still open looked deserted to me, on the verge of failing for lack of custom. Dublin was a great mouth holed with missing teeth.

A waft of eucalyptus. The man to my left on the tram bench was pressing a soaked handkerchief over his nose and mouth. Some wore it on their scarves or coats these days. I used to like the woody fragrance before it came to mean fear. Not that I had any reason to shrink from a stranger’s sneeze, being immune now to this season’s awful strain of flu; there was a certain relief to having had my dose already.

A man’s explosive cough on the bench behind me. Then another. Hack, hack, a tree being axed with too small a blade. The mass of bodies leaned away. That ambiguous sound could be the start of the flu or a convalescent’s lingering symptom; it could signify the harmless common cold or be a nervous tic, caught like a yawn just by thinking about it. But at the moment this whole city was inclined to assume the worst, and no wonder.

Three hearses in a row outside an undertaker’s, the horses already in harness for the morning’s first burials. Two aproned men shouldered a load of pale planks down the lane to the back—for building more coffins, I realised.

The streetlamps were dimming now as day came. The tram rattled past an overloaded motor launch that looked tilted, askew; I saw two men kick at the rear axle. A dozen passengers in mourning wear still sat pressed together on its benches, as if stubbornness might get them to the funeral mass on time. But the driver, despairing, let her forehead rest on the steering wheel.

The man sitting jammed against my right elbow trained a little torch on his newspaper. I never had a paper in the house anymore for fear of upsetting Tim. Some mornings I brought a book to read, but last week the library had recalled them all for quarantine.

The date at the top reminded me that it was Halloween. The front page was offering hot lemonade, I noticed, and life insurance, and Cinna-Mint, the Germicidal Throat Tablet. So many ex-votos sprinkled among the small ads: Sincere thanks to the Sacred Heart and the Holy Souls for our family’s recovery. The man turned the page, but his newspaper was blank inside, a great rectangle of dirty white. He let out a grunt of irritation.

A man’s voice from the other side of him: Power shortages—they must have had to leave off printing halfway.

A woman behind us said, Sure aren’t the gasmen doing their best to keep the works up and running, half staffed?

The Pull of the Stars
Emma Donoghue
Shop Now