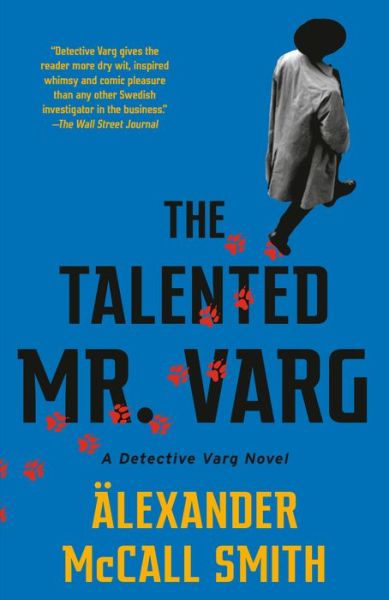 They left the coffee bar at the same time as the engineers, who were still talking about the instability of bridges. The barista gave Anna a wave and Ulf an involuntary frown. This young man was stuck behind the bar of the café, dispensing coffee under the supervision of the rather miserable owner: a woman lodged, as Anna would have it, in a permanent low-pressure zone. Anna resorted to weather metaphors in describing others, who were sunny, cloudy, tempestuous, or, in rare cases, hurricanes. I should be kinder to him, thought Ulf, and he gave the young man a smile—slightly forced, perhaps—which was rewarded with a curt nod of the head.

He and Anna walked across the road and entered the building in which the Department of Sensitive Crimes had its offices. They did not have much room—an outer office in which a receptionist sat and served them and three other police departments in the same building: fingerprints and DNA, commercial fraud, and transport. They were all semi-autonomous, being separated by the length of several city streets from the main police headquarters, a bustling building from which Ulf felt progressively more detached. Commercial fraud kept very much to themselves, and had the reputation of being aloof and stuck-up; certainly, they never deigned to talk to either transport or fingerprints and DNA, who got on well together and had perfectly civil relationships with Ulf’s department. Comity, though, did not prevent others from speculating whether it was really necessary to have a Department of Sensitive Crimes at all. “All crime is sensitive,” observed the head of transport. “I don’t see why they should be given special offices and special treatment.”

“My feelings exactly,” said the head of supplies. “We’re stretched enough as it is when it comes to putting officers on the streets. We don’t need to give Varg and those cronies of his special treatment so he can go sniffing around ridiculous non-crimes. Breaches of etiquette, for the most part—not even crimes. What a waste of resources!”

This bureaucratic antipathy to the department usually manifested itself in no more than the occasional barbed comment. From time to time, though, it emerged from the shadows to become overt and obstructive. This sometimes took the form of special rules designed, as far as Ulf could make out, to frustrate the ability of the department to do its work.

Requisitioning supplies was one such area where this unhelpful attitude surfaced. Here the head of supplies had devised a scheme for this purpose that involved different procedures and forms for each department. Thus, if fingerprints and DNA wanted anything, from new stationery or pens to an official vehicle, they were required to apply for this on a form that was particular to that department, and the same applied to all the other branches of the force. The overwhelming majority of departments used a form that was identical in its wording, apart from the heading and the form number. This form was simple and straightforward, and merely required a brief description of the requested item or items, such as “ink, black” or “files, manila, open.” The Department of Sensitive Crimes, though, had to apply on a form that was different from any of the others. The stated reason for this was the sensitive nature of its work.

It was when one examined the form that it became apparent how deep must have been the supplies division’s animus for Ulf’s department. A Byzantine bureaucrat, at the height of the Ottoman Empire, could hardly have devised a more opaque and convoluted system, nor one more inspired by the goal of obfuscation or even sabotage.

“I don’t understand this system,” Carl had said to Ulf when it was first foisted upon the department. “You see, we have these special forms, yes?”

“Yes, we do,” said Ulf, looking at the handbook that had just been sent to each of them.

“Well,” continued Carl, examining his own copy, “it says here that we aren’t allowed to ask for anything by name: we have to use a code.”

“So I see,” said Ulf, trying to make sense of the explanatory notes in the handbook.

He passed the handbook over to Carl.

“If I want a new notebook, then,” Carl continued, “I can’t simply write notebook in the box that says ‘Item requested’—I have to put a code number.”

“So it would seem,” said Ulf. “But it’s not altogether clear where the codes are listed.”

“Well, that’s the thing,” Carl said. “It says on page forty-five that the codes are confidential. And as far as I can see, we have no means of getting hold of them.”

“Then I don’t see how we can order anything,” said Ulf.

“Exactly. There’s a list of codes at the back, but the key to what they are is not available.” Carl turned the pages of the handbook to get to the back. “Yes, here they are—a whole lot of numbers, but no indication of what they mean. So, I have no idea what a 254c is. Do you?”

Ulf shook his head. “Is there a 254a, or even b?” It was an old trick, he thought, to add superfluous letters. This made people feel there was something special about an otherwise humdrum item.

Carl agreed. But he needed to order photocopying paper, as their machine had recently run out. The problem, though, was that he had no idea of the code for that item, and when he had called the supplies office, he had been told that codes were not available.

“What we need to do,” suggested Ulf, “is this: We order a few items at random. Then, when we discover that they are not what we need, we return them and order some other number. Eventually they’ll get so fed up with dealing with our returns and re-orders that they’ll give us a proper list.”

Carl agreed to this, and they picked out, quite at random, item 354/2/d. The relevant form was filled out and a tick was placed in the box marked urgent.

“Let’s see what we get,” said Ulf. “You never know—it might actually be photocopying paper.”

The ticking of the urgent box seemed to work: three hours later, a small box arrived by motorcycle messenger from the supplies department. Ulf signed for this—three signatures were required, including one from a counter-signatory. Ulf wrote his name twice, and then wrote Carl’s as well, imitating his signature skilfully. This was standard practice in the Department of Sensitive Crimes, where it had been agreed that everybody could use a colleague’s signature in order to simplify matters; everybody except Erik, who as a filing clerk did not have signing authority.

“Absurd,” Ulf said as he penned the three signatures. “Kafkaesque.”

Carl and Anna watched closely as Ulf opened the package.

“It’ll have to go straight back,” said Anna.

Ulf removed the last layer of wrapping to reveal a dog lead.

Carl burst out laughing. “So now we know. If you want photocopying paper, don’t request a 354/2/d.”

Ulf examined the lead more closely. “It’s a very good lead,” he said. He strained to read the small print embossed on the lead. “Yes, this says ‘Made in China.’ Well, that’s a surprise. That reminds me of the Leonard Cohen song—you know the one where he sings about Suzanne giving him some oranges that come all the way from China. I’ve often wondered about that. But anyway, this also says…” Again he strained to read. “ ‘Genuine imitation leather.’ ”

This brought a chuckle from Anna. “How can—”

Ulf interrupted her. “No, don’t be so cynical. What that means is that the manufacturers have made a real effort—a genuine effort—to imitate leather. It refers to their bona fides. These people are not trying to fool anybody—this is a real attempt to imitate leather.”

Erik looked up from his desk. “Why does supplies have dog leads? Didn’t we get rid of our dogs a few years ago?”

Ulf considered this. Erik was right about the abolition of the dog department. A few years earlier, the Commissioner had announced that the police would no longer be using dogs for public order duties on the grounds that dogs gave the wrong impression. Police forces who used dogs presented newspaper photographers with a classic opportunity to portray the forces of law and order as repressive—with a snarling dog lunging on the lead, a Swedish policeman might look to all intents and purposes like a figure from a liberally minded person’s nightmare. The announcement had attracted derision from outside the force as well as within. From outside, amongst the politicians who had criticised it was Ulf’s own brother, Björn Varg, leader of the Moderate Extremists. Björn had issued a press release saying that more money should be spent on training more dogs to bite more people—“but only those who deserve it, of course.” That was a typical Moderate Extremist position, Ulf had noted, rather to his embarrassment.