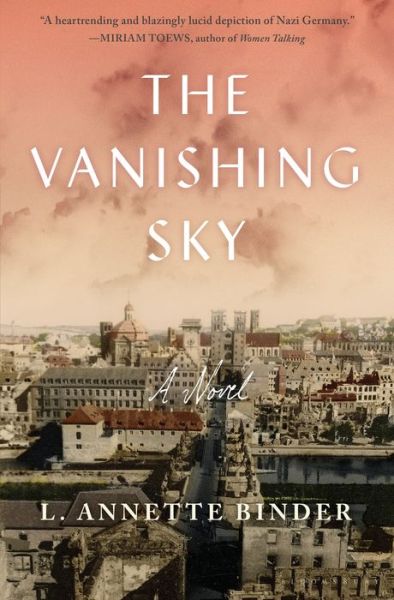 They walked single file, and the youngest boys were in the back, kicking up leaves. Georg cupped his hands over his ears. The wind blew hard across the lake, churning its waters and bringing up whitecaps. It was time for their winter uniforms. Time for the ski caps and the long woolen pants. Fall came fast in the valley. It came fast and was gone, and the winter would last until April, but the others didn’t mind. They shot their rifles and climbed on their bellies in the mud, until their skin went pink and then red from the cold and sweat ran down their foreheads and into their eyes. They chopped wood, too, and fixed fences and worked like farmers because it was good for young men to work in the countryside, especially for the city boys in the group who had never milked a cow before or wrung a chicken’s neck. Drafted into the Jungvolk at ten and the Hitler Jugend at fourteen and they were almost soldiers now. Just one more winter and their papers would come.

Who knew why they’d wanted him at the Hitler School. His eyes were brown and not blue. He was fat even before he came, and he’d gotten fatter still because the food was good. They fed their cadets fresh meat and thick slices of bread, and there was butter at the table and sometimes even chocolate. They taught no math and no languages at the academy, no painting or poetry, because they needed soldiers and not scholars. The instructors talked about the Slavs in class and how primitive their faces were and how to use the Panzerfaust, they talked about the Jews and how they had to be rooted out from German soil, and nothing they said made sense. There weren’t any Jews here and not in his class back home either. He wasn’t sure how long it had been since they’d gone away. Helga Weinstein with her pale eyes and the Stern brothers who lived in the finest house in Heidenfeld and went to Würzburg every week to study violin, they’d stopped coming to school from one day to the next. They’d gone to their cousins in the hills, some people said. They’d gone to America, and Georg was jealous at the thought. He looked at the maps on the wall instead of listening to the lectures. He measured how far he was from home, how far from Mutti and his room. Not even two hundred kilometers if you went straight, but Heidenfeld was as far away as the moon, Heidenfeld and the schoolhouse there and all the things he’d learned, all his Latin and his Greek.

He walked now behind Little Graf, who swung his arms by his sides. The wind blew down leaves, and they fell slow as confetti. He stopped to catch his breath, and the others passed him in the line. “Come on, old man,” someone said, “you’re almost there,” and a few laughed. Georg laughed with them. He knew humiliation. He knew all their jokes. They teased him because he was fat around the belly and his shoulders sloped. They teased him because he lingered over his old magazines. Youth and Homeland and Der Pimpf and The Young Fellowship, he had them all and knew the pages with the best photographs. The boys were perfect in those pictures, caught in a perfect moment when the light fell soft across their skin. They threw javelins. They jumped and ran and shot their bows. They looked beyond the camera, toward the finish line, toward the sky, and they were graceful as cats the way they moved. “Those old things again,” someone would say when he pulled them out, “why not look at something new.” They shook their heads because he was a hopeless case, and sometimes they didn’t let it pass. There was a strange tone to their teasing then, but he pretended not to notice, and once Müller had come in and sat with him. “Give me one,” he said, and they read together, and the others went quiet and left them both alone.

The boys came to the schoolhouse and found their spots by the long table. The classroom was empty and the teachers were gone for the day, and it was time for cleaning. All their rifles lay in a line, their bronze brushes and rags and jars of oil. Georg dipped his patch in the bottle. He loved the smell of the solvent, thick as liquor and sweet. He was scrubbing out the bore when the droning began. It was distant at first, and no one looked up. They were accustomed to the sound. Every afternoon they heard it. They had gone to the shelter the first few times, huddling close in the cellar under the town’s only hotel, but it was worse in the shelter than it was outside. The old folks gasped for air down there and fanned themselves with pieces of cardboard. Babies cried, and mothers shoved one another to find a place. They stopped going after a while, a few at first and then more and more still, until they all stayed in their rooms and worked right through the noise. “Damn wasps,” one of them said, “that’s all it is.” They measured the sound in wasps, saying that wasn’t too bad. It’s three wasps at most or maybe four. But they were nervous even as they laughed, and the sound worked its way through them until they quivered like tuning forks.

Georg took a fresh patch from the pile. He reached across the table for the solvent. “Something’s different,” someone said, “they sound different this time.” There was a moment of perfect stillness in the room, and all the air went heavy. Before anyone could rise from the table, the walls shook, and the windows shattered. The glass came down onto the worktable, and it fell in pieces against their heads. Some of the boys were cut, and the blood matted their hair and ran down their cheeks. They knelt together in the center of the room and waited for the rumbling to stop, and when it did, they went outside and looked to the sky. Smoke rose in pillars from the town center. It drifted lazily toward the hills.

They walked together toward the smoke. The youngest boys ran, and even the ones who were bleeding came. Ash floated in the air and fell soft as powder on the buildings and the streetlights. Townspeople stood on the curbs and gathered around the buildings that were hit. Men were high on the piles already, pulling out bricks and planks and tossing them down. Old women fetched buckets and shovels and barrows. They ran fast along the streets, those gray women. They were accustomed to cleaning up. A girl sat at the side of the road and held her head in her hands. Two friends spoke to her and stroked her hair, but she began to wail anyway and the sound carried all along the piles.

The older boys climbed on first and pulled the young ones up. They scaled the rubble as if they were going for a hike on a hill and not climbing over bricks and wood and broken glass. They passed the debris piece by piece down the side of the pile until it reached the bottom, where it was sorted and put in barrows and carted away. It was hot on the pile. Georg could feel the heat through the soles of his shoes. He’d have blisters for certain when he was done. All the air smelled of metal, and even when he drank from his bottle the ash burned in his throat. Little Graf worked just below him and took his bucket when it was full. He gave it to the next boy, who passed it down the line.

“What a mess,” Little Graf was saying. “What a waste.” He looked around for someone to agree, but nobody listened. He was compact like a gymnast, and his voice hadn’t changed yet. It was high as a choirboy’s, and so the boys all called him Little Graf, because Graf means “count” and they thought that was funny, having a Little Count in school with them. “Next best thing to a Little Prince,” they’d say, “just about as good.”