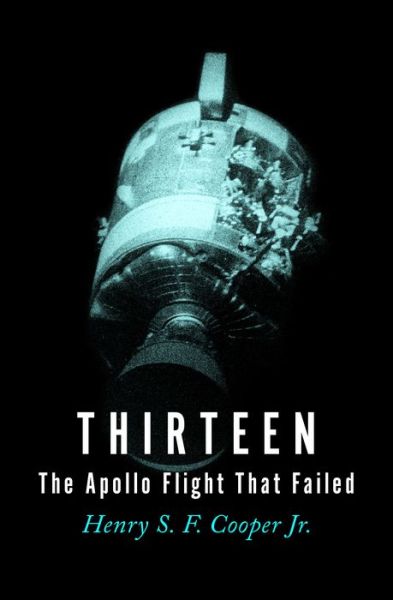 At a little after nine central standard time on the night of Monday, April 13, 1970, there was, high in the western sky, a tiny flare of light that in some respects resembled a star exploding far away in our galaxy. At the Manned Spacecraft Center, near Houston, Texas, the glow was seen by several engineers who were using a rooftop observatory to track the Apollo 13 spacecraft, which had been launched two days before and was now a day away from the moon and two days from a scheduled moon landing. One of the group, Andy Saulietis, had rigged a telescope to a television set in such a way that objects in the telescope’s field of view appeared on the screen. Above, the sky was clear and black, like deep water, with occasional clouds making ripples across it. Saulietis and his companions—who, incidentally, had no operational connection with the Apollo 13 mission but were following it for a related project—had lost sight of the spacecraft, two hundred and five thousand miles away. However, they had been watching the much larger booster rocket that had propelled the spacecraft out of earth orbit and was trailing it to the moon; the booster had appeared as a pinprick of light that pulsed slowly, like a variable star, for it tumbled end over end as the result of dumping its fuel, and the sunlight glinted off it with varying intensity. Shortly before nine, the observers on the rooftop at Houston had lost track of the booster, too, for the pinprick had been almost at the limit of the resolving power of their equipment. Suddenly, near the middle of the TV screen, a bright spot appeared, and over the next ten minutes it grew to be a white disc the size of a dime. The rooftop watchers had no communications link with the Mission Control Center, about two hundred yards away—a large building consisting of two linked wings, with operations rooms in one, offices in the other—and they had no reason to connect the flaring light with the spacecraft or to be concerned with the safety of its crew: Captain James A. Lovell, Jr., of the United States Navy, who was in command; and the pilots for the command and lunar modules, John L. Swigert, Jr., and Fred W. Haise, Jr., both civilians. It was to be some time before either Mission Control or the astronauts themselves realized that one of the ship’s two oxygen tanks had burst, spewing into space three hundred pounds of liquid oxygen, which meant the loss of half the craft’s supply of this element for generating electricity and water. The oxygen came out in one big blob, and in gravityless space it formed a gaseous sphere that expanded rapidly; the sunlight made it glow. In ten minutes, it was thirty miles in diameter. Then the white disc slowly disappeared—though traces of it were observed an hour later through a more powerful telescope in Canada.

Saulietis and the others assumed the white spot to be a defect in their television set, which had been flickering and blipping badly, so they went home to bed and thought nothing about the incident until the next morning. They were not the only ones who failed to grasp the situation. After two successful lunar landings, which had been preceded by two Apollo flights around the moon, no one at the Space Center was thinking in terms of accidents. Later, some of the first interpretations of what had happened would center on the notion that the spacecraft had been struck by a meteor—a borrowing from science fiction, for Jules Verne’s space capsule in From the Earth to the Moon had almost been hit by one while it was approaching the moon. No one believed that there could be any flaw in the craft itself. Yet in the Mission Control Center, where dozens of automatic pens were scribbling data radioed from Apollo 13, at the time of the explosion the pens stopped writing for almost two seconds—a “drop-out of data” indicating a major problem with either the electrical system or the system of transmitting data from the craft. No one noticed.

Inside the Mission Control Center’s Operations Wing, a chunky, monolithic three-story structure as white and silent as a block of ice—the geometric representation of an intelligence brooding on far-off space—the flight controllers were at least as thoroughly cut off from the world around them as sailors belowdecks on a ship at sea. There were no windows, as there are none on the lower decks of a ship—and, in a sense, the Operations Wing really was the lower decks of a ship, the upper deck being a couple of hundred thousand miles away in space. Astronauts are more like officers aboard a large ship than like solitary heroes, and that may account for some of the difficulty many people have in comprehending their roles. In the spacecraft and the Mission Control Center combined, there were about as many astronauts and flight controllers as there are officers aboard a big vessel, and they worked together as closely as officers belowdecks work with officers on the bridge. In fact, one of the controllers, the Flight Director, in some respects might have been regarded as the real skipper of the spacecraft, for although the relationship between the astronauts and the ground crew was a delicate, interdependent one, the astronauts usually did what he advised, particularly in an emergency. Though the flight controllers were on earth, they had, by means of telemetry—data radioed constantly from the spacecraft—more information about what was happening aboard than the astronauts themselves had. The walls of the Mission Operations Control Room, on the third floor of the Operations Wing, were the same color as the inside of the command module—gray. Five big screens at the front of the room might have been windows looking out into space: the middle screen showed the earth on the left and the moon on the right, with a bright-yellow line representing the spacecraft’s trajectory as it lengthened slowly between them. And some of the consoles at which the flight controllers sat duplicated equipment aboard the spacecraft.

The flight controllers, most of whom were in their twenties and thirties, sat in four rows. Before the accident, they were relaxed—even bored. The first fifty-five hours of the flight had gone so smoothly that they had once sent word to the astronauts that they were “putting us to sleep down here.” One team of flight controllers had been reduced to commenting on the number of “thirteens” that cropped up; for example, the time of launch in Houston—the official time for the flight—had been 13:13, or in our terms 1:13 P.M.