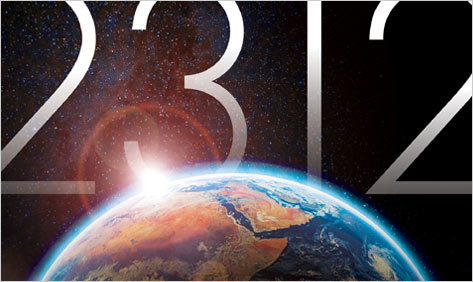 “The sun is always just about to rise.”

So begins 2312, Kim Stanley Robinson’s gloriously real, demi-far-future, Solar-centric space opera. It’s something of a radical departure for this author, so often focused in his career on near-term, less expansive, even monitory scenarios. (His last book, Galileo’s Dream, had speculative elements resonant with the current novel, but fully half that book occurred in the seventeenth century.) This lead-in sentence reflects a literal truth about the captivatingly bizarre conditions on colonized Mercury, where our tale commences. (A self-propelled city on rails, Terminator, must endlessly circle the planet to escape the sun’s fury — thus the eternal sunrise.) But it is also the perfect emblem for the attitude of the whole novel: hopeful, upbeat, generous, enlarging of limits, promising a new, albeit slightly scary dawn always on the horizon. And we can equally apply this optimistic, grappling-with-reality stance and angle of attack to an entire school of science fiction that once reigned over all others.

For many decades after its birth in 1926, genre science fiction was a dominantly techno-optimistic literature, assuming and depicting a steady progress in material, cultural, and even spiritual conditions for the human species (and for other sapients in the universe as well, even if they had to be dragged along screaming and flailing their tentacles). It’s telling that Alexei Panshin’s massive study of Golden Age SF, The World Beyond the Hill, is subtitled “Science Fiction and the Quest for Transcendence.” Dangers, roadblocks, contradictions, and temporary setbacks on the way to such an uplifted future were not ignored, often serving as critical plot points, but they were always conquered, even if victory came at immense expense and over the span of several generations. Such SF, critics maintain in hindsight, laid down a template over the actual unborn future that many scientists and engineers and other readers of the imaginative literature sought to reify, leading directly to our current technology-suffused condition, for good or ill.

But, of course, times and tastes change, and, faced with many late-twentieth-century real-world failures and disappointments, and awakening to some inbuilt biases and injustices in such a paradigm, the genre in large part abandoned such visions in favor of dystopias and eco-warnings, or fantasy-like space operas so removed from the present as to resemble fairy tales with lightsabers. The arguable consequences: an inability to “get big things done” and a general societal despair that global conditions could ever improve, or that science held any solutions whatsoever.

But it seems that, little by little, the pendulum is swinging back toward a sturdy set of writers who endorse a new, enlightened techno-optimism. A large factor in the recent shift in attitude is down to one individual, the novelist Neal Stephenson, who has publicly lambasted SF writers for jettisoning the genre’s old core responsibilities and verve. Stephenson has launched a foundation and journal, Project Hieroglyph, specifically to foster more SF along traditional lines. And a few recent books — such as James Corey’s Leviathan Wakes and David Marusek’s Counting Heads — have espoused a more sanguine worldview, in which the imagined future learns from the mistakes of the present.

Robinson’s novel has been gestating for several years now — I heard him mention it at a convention in 2009 — but it emerges at the perfect time to help spearhead this burgeoning renaissance. And so well done a portrait of the future is it, carried along like Terminator on rails of engrossing storytelling, that he gives renewed strength to the mode.

Robinson’s scenario is a fully enlivened solar system, a bit reminiscent of John Varley’s Eight Worlds saga. Mars and Venus have been terraformed, even if only partially. The big outer planets and their moons are inhabited. Mercury too, as well as tiny worldlets even closer to the Sun, from which flow beams of collected solar energy to power Saturnian settlements. But, more astonishingly and divergently, thousands of hollowed-out asteroids — “terrariums” — offer a spectrum of bizarre or businesslike sovereign habitats, moving endlessly on predictable orbits that allow them to serve as a kind of interplanetary subway system. Hop on, hop off!

The only hellhole left in this post-scarcity, Edenic, frontier-yeasty future is Earth, “the saddest planet.” Uneasily hosting eleven billion people, its climate ruined and the old structures of the one-percenters versus the ninety-nine-percenters still shockingly in place, the motherworld festers. And, like any diseased part of the whole human organism, its cordoned-off sickness threatens the health of the rest of civilization.

Robinson’s main protagonist is the certifiably eccentric wildwoman, Swan Er Hong, artist/designer/architect/rabble-rouser. What a piece of work she is, the kind of live-on-the-edge avant-gardist who will swallow a suite of newly discovered alien microorganisms just to see what happens. (What happens is they accidentally save her life when she’s caught in a solar flare on the surface of Mercury.) Following her exploits is like trying to photograph a firecracker in mid-explosion, and this makes for a thrilling tale, with suspense and surprises around every corner. Physically, Swan is a youthful elder, over 130 years old, thanks to longevity treatments. Mentally, she’s a perpetual thirteen-year-old genius on an emotional roller coaster. I am reminded — and I think Robinson had this precedent firmly in his sight — of Mia Ziemann from Bruce Sterling’s Holy Fire, a similar icon.

Forming an unlikely trio with Swan — they unite upon the suspicious death of Alex, Swan’s grandmother, a potent figure in interplanetary politics and science — are Inspector Jean Genette, a Martian member of Interplan, the solar police force (Genette happens to be a “small,” a bioengineered dwarf), and Wahram, a stolid, lumbering diplomat from Io. The humorous Wahram is secondarily important and vivid in the tale, especially when he finds himself falling in love with Swan — though, truth be told, he’s more hypnotically tantalized by her scary affect than conventionally enamored. Separate and together, the three call to mind Dorothy (Swan), the Tin Man (Genette), and the Cowardly Lion (Wahram), moving purposefully through the Oz-like venues of Sol-space in search of the Wicked Witch, who is intent on disrupting the peace. Additionally, I kept flashing on a trio from the work of Poul Anderson (a touchstone if there ever was one for this school of SF): sensible startrader David Falkayn (Genette), hot-blooded feline alien Chee Lan (Swan), and her unflappable reptilian consort, Adzel (Wahram). These resonances lend the trio a mythic status that never overshadows their uniqueness as individuals.

Given the richness of the actors and the baggy, capacious, mystery-styled plot that allows for lots of entertaining diversions, what can we say of the speculative elements here? Just this: Robinson is meticulous, daring, inventive, passionate, farsighted, and insightful. This future is engineered so gracefully, and to such high-caliber specs, that it will pull you in as naturally as any contemporary, mimetic novel.

First, Robinson does not neglect to explain how we get from 2012 to 2312, a gap many other novels leap over simplistically. He posits a Heinleinian future history that leads inexorably to his scenario. (One winces with guilt to learn that our current era was dubbed “the Dithering.”) Then he fills his future with much more than exotic venues, though there are plenty of those, visited on reasonable pretexts by Swan & Co. (Care to surf the waves in Saturn’s rings? Hang on!) Robinson sketches out new religions, new philosophies, new politics, new economic systems, new art forms, new physiologies, and new lifestyles consistent with his freedom-embracing non-Earthers. Like U.K. writer Ken MacLeod, Robinson finds the infrastructure of society to be as important and fascinating a character as the humans in his story. But what’s really astonishing is how much Robinson’s future is both its own unique gestalt and an allegory of our current state of affairs.

Long known for his fondness for “infodumps,” which he has defended as merely one element in any good narrative toolkit, to be used wisely and sparingly, Robinson here has blended these patches seamlessly into the dramatizations. His science and engineering and history are delivered poetically and transparently. But he has also broken out some bits into separate chapters titled “Extracts” and “Lists.” If you are a longtime SF reader, this kind of multimedia presentation will immediately bring to mind a monumental novel from 1968 by John Brunner, Stand on Zanzibar.

Stand on Zanzibar remains to this day the ne plus ultra of old-school-SF near-future worldbuilding, the very mode Stephenson is presently championing. (Although admittedly Brunner folds in perhaps a quart more spicy Cassandra flavorings than Stephenson currently desires.) Along with three other Brunner novels that appeared between 1968 and 1975 — The Jagged Orbit, The Sheep Look Up, The Shockwave Rider — Zanzibar stands as a lucid model of authorial engagement with the bubbling-under issues of the present, recast as the unavoidable realities of the future.

Brunner’s career ended sadly, as he was brought low by bad decisions, a prickly character, ill health, and publishing tectonics. He’s approaching forgotten status now, his name virtually unknown to young readers and his work mostly out of print. (Although a handsome new edition of Zanzibar is extant, featuring a knockout introduction by Bruce Sterling.) But so long as rigorous, inspired authors like Robinson, one generation removed from Brunner, continue to carry forward his torch of hard-edged, hard-fought, extrapolative vigor, then our inevitable entry into the future — our attempt to imagine on paper and build the world we most desire to inhabit — will be well lit.