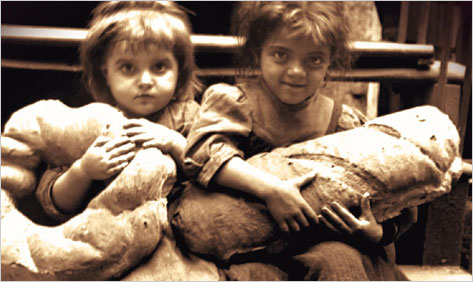 It’s posh now, Orchard Street on New York City’s Lower East Side. Studio apartments go for upwards of a couple grand a month. The shops are rarified, the restaurants good and edgy. But what is now tony would, a century ago, have been Anthony, newly arrived from Calabria, who lived on Orchard Street because he couldn’t find anything cheaper. If alone, he probably lived in a boardinghouse, packed like a sardine into one of those studios with a handful of other immigrants. If he had a family, he could well have lived at 97 Orchard Street.

Anthony? Not Avraham? As culinary-historian Ziegelman explains in this illuminating, rangy, and wonderfully atmospheric book, though the Lower East Side is primarily identified with its Jewish community, it was the first port of call for many immigrants. This is the story of five families—German, Irish, Jews from Germany and from the Pale, and Italian—who lived in the tenement at 97 Orchard between the years 1863 and 1935. It is the story of Old World identities daily being beveled by their new surrounds, yet holding on to their food traditions (while appropriating agreeable new foodstuffs), as emotional ballast, a piece of the familiar in a strange land. It is, as well, an exploration into milieu, and all the forces that went into shaping everyday life.

First on the scene, in 1863, was Lucas Glockner, a German tailor who, in an impressive arch, saved his pennies and bought a property, 97 Orchard, site of an old Dutch church. He knocked down the building and built anew—same as it ever was. The five-story, Italianate structure had four 350-square-foot apartments per floor: kitchen, windowless sleeping room behind, and a parlor in front that was “not much bigger than a New York taxi.” Glockner added warm touches; after all, he would be living there: ceilings of sky blue, walls painted salmon pink and pale mint, two fireplaces with wooden mantles and slate hearthstones. He skimped on indoor plumbing, however. Hitting the courtyard privy in the dead of winter was, perhaps, bracing, but carrying water from the pump up five flights must have been excruciating drudgery.

Thus circumstances put a premium on simple, efficient cooking: one-pot dishes like fricassees and hasenpfeffer, a wild-rabbit ragout (sample recipes are included throughout the book). Mrs. Glockner did spontaneous shopping at the grocer’s and serious shopping at the public market. But Mrs. Glockner can go only so far as a model before Ziegelman needs to branch out to cover regional German specialties such as jelly donuts, pike, and blood sausage; the role of beer gardens; the rise and fall of Vienna bread—for starters. So, too, with the Moore family from Ireland. The chronicle of their diet—oatmeal stirabout, potatoes, fish hash, corned beef—is supplemented with investigative forays into work as a domestic, the residential purgatory of the Irish boardinghouse, the effects of Cromwell on the Irish landscape, and the potato famine. More than most immigrant groups, the Irish had an ambivalent attitude toward their customary foods, which waxed and waned along with anti-Irish sentiments and class snobbism, distancing themselves from corned beef, then embracing it. “The language of food, like any expressive medium, is never fixed but perpetually a work in progress.”

Natalie Gumpertz and her shoemaker husband Julius moved into the tenement in 1870. Natalie stayed until 1886, but Julius only lasted four years until he joined the ranks of “missing husbands,”evidently unhinged by the strain of supporting his family. Natalie thereafter struggled to provide the kaleidoscopic, hybrid cuisine of her ancestors—gefilte fish, bean soups, challah, boiled potatoes with imaginary fish for the very poor—gathering her ingredients from the streetside pushcart market. If she were of the mind, Natalie could break kosher tradition thanks to the cultural movement of Haskalah, which encouraged an openness to change and a more relaxed approach to religious observance and dietary laws. Oysters, plentiful and inexpensive in New York City, could be eaten, as well as pork products, another New York mainstay (in 1850, some 20,000 porkers were policing the streets of the city). Said one Reformed epicure: “Moses never tasted Cincinnati ham. Had he done so, he would have commanded it to be eaten.”Ziegelman notes other changes afoot. Schmaltz from tenement goose farms, which gave the hygiene inspectors the fantods, was being eclipsed by Crisco; gefilte fish was shaped into small loaves rather than the entire reassembled fish. Sabbath dinner would maintain its cosmic significance, the outward sign of a powerful relationship with God, mealtime as sacrament.

In the 1880s came the Rogarshevskys, unambiguously Orthodox Russian Jews in flight from pogroms, for whom food signified piety as surely as study and prayer. The Rogarshevskys were of scant means, which allows Ziegelman a fuller inquiry into the pushcart markets, where one could buy small quantities of products for soups like borscht, krupnik, and schav, or a pickle sandwich, or a penny apple. The tenement became the new shtetl; the sharing of food between the poor was instinctual. Outside the tenement, Ziegelman serves forth every manner of eatery: Romanian Jews, the bon vivants of the ghetto, with their restaurant dance floors, smoked-goose pastrami, and sweet-and-sour tongue; tearooms for kibitzing; knish parlors; dairy restaurants, a response to the high cost of kosher meat, which had sparked riots in 1902; and private restaurants in the street-level parlor of tenements, catering provincial meals.

Last to arrive were the Baldizzis, in the 1920s, illegal immigrants as a result of the new quota system. Though cold-water plumbinghad been installed in 1902 (toilets remained communal) and, in 1920, electricity (but still no heat), 97 Orchard was by then a shadow of its former self, down to 25 residents from a high of 111 as immigration slowed. The neighborhood had become haunted, as landlords couldn’t or wouldn’t keep up properties, falling into sorry disrepair when not tumbledown, burnt-out, abandoned. From southern Italy, the Baldizzis—Mr. was a cabinetmaker and stowaway; Mrs. a laundress with a doctored passport—were typical persecutees, branded as lazy, ignorant, violent, and clannish, rag-pickers and shiftless organ-grinders, as were other southern Italians, kept at arm’s length, denied basic civility, at times reduced to milk-soaked stale bread and pickings from the rich man’s abundance of garbage, even as their foods slowly beguiled their persecutors: spaghetti, dense breads, pizza, confetti, olive oil, salads, snails, squid, eels.

Ziegelman isn’t in the market to romanticize 97 Orchard. Her impeccable research won’t permit it. At its best, the tenement was a stepping-stone, a cold-comfort place to circle your wagons and put some food on the campfire. When opportunity knocked, tenants got the hell out. But although Ziegelman’s voice is smart, it is also smitten by lives reimagined so vividly you could smell them in the air, all that cabbage and onion and garlic. Orchard Street doesn’t smell much any longer, nothing ripe to the point of deliquescence, shocking the nose. Some might think that’s a shame.