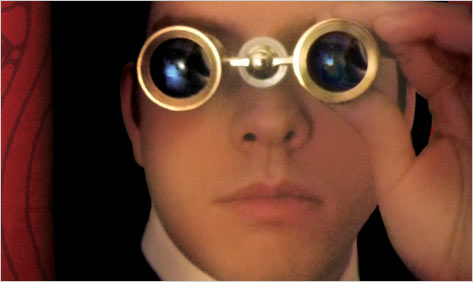 Historical novels are so plentiful these days that we mightsometimes forget how difficult they are to write. Particularly good examples ofthe form—Julie Orringer’s The Invisible Bridge, or Peter Carey’s Parrotand Olivier in America—read so smoothly that they create the illusion ofan effortless performance. But in fact it’s hard to blend research andfabrication without showing the seams. It’s harder still to settle readersconvincingly into a historical moment and keep them there, enthralled, overtime.

Into this risky terrain strides Joseph Skibell, whose lengthynew novel begins in fin de siècle Viennain and ends in the Warsaw Ghetto in the early 1940s. His wayfaring narrator, theromantic of the book’s title, is a young Jewish oculist named Jakob Sammelsohnwho hails from a small Galician village called Szibotya.

Jakob suffered a devastating rejection at age twelve  when his pious father denounced him forreading secular literature instead of studying Torah. Unable to abide his father’shumiliating punishments—the worst of which was a forced marriage to Ita, thevillage “idiot girl”—Jakob fled his hometown and made his way to Vienna, where a sympatheticuncle took him in and looked after his education.

Viennais a dazzling Art Nouveau wonderland to this boy from the hinterlands, bustlingwith innovation and teeming with intellectuals. Yet while he has left the worldof his father far behind, Jakob is hardly done with father figures. During thecourse of the novel he will be patronized by no fewer than three mentors, allreal-life luminaries: Sigmund Freud, who in 1894 was just beginning to raiseeyebrows with his early work in psychoanalysis; L. L. Zamenhof, founder ofEsperanto, the utopian international-language movement; and Rav KalonymosKalmish Szapira, a brilliant Warsaw rabbi who was murdered by the Nazis in1943.

Skibell has set for himself the difficult job of weavingJakob’s fictional story into the facts of these men’s lives. He involves hisnarrator first in the case of Emma Eckstein, an actual patient of Freud’s. InSkibell’s imagining, Emma suffers from a hysterical condition in which sheappears to be possessed by a dybbuk, a demonic spirit from Yiddish folklore.This dybbuk claims to be none other than the specter of Jakob’s unwanted brideIta, who killed herself after Jakob abandoned his birthplace and is now makingan other-worldly plea for his attention.

Is Emma’s hysteria really caused by demonic possession, asJakob nervously begins to believe, or are its origins purely medical, as Freudinsists? The case stirs up a debate about the purpose of faith in the modernworld–a theme that permeated Skibell’s first novel, a tale of Holocaust magicrealism called A Blessing on the Moon,and his second, The English Disease,a social satire about intermarriage. That theme appears again in the new novel’sEsperanto section, in which Jakob joins a delegation of dreamers who imaginethat a universal language might promote brotherhood where religion has failed. Andit reverberates through the book’s final passages, which chronicle a rabbi’srefusal to abandon his faith in the darkest moments of the Nazi genocide.

Skibell’s confluence of big ideas and lofty personalities isadmirably gutsy. So are his generously dispatched love scenes, in which he propelshis eager young narrator into the arms of several delightful fräuleins. But whileambition in a novel is always praiseworthy, it’s never more important thanexecution, and several defects conspire to take the reader out of Skibell’searnestly constructed illusion.

First among those is the dialogue, through which thecharacters are forever either declaiming (Freud on Emma Eckstein’s condition: “Ifthe reaction is suppressed, the emotional charge attaches itself to the memoryand manifests as hysteria”) or exclaiming (Emma on Freud: “He’s justso handsome, and his theories are so brilliant and so bold!”), but seldomsimply talking.  Too many speechesthroughout the narrative are nakedly expository, particularly when the dramadials down. (In the Esperanto passages, for instance, much of the conflictinvolves a passionate argument over accent marks.) In general, the clankingmachinery of historical fact is a disruption here rather than an enhancement.

When the dramaratchets up, though, things tend to get worse. The demonic possession scenesare flat-out ridiculous, lacking any of the supernatural authority thatdistinguished A Blessing on the Moon.Instead of bringing the reader closer to this brave new era, in which brainscience is just beginning to clash with religious belief, theirclichéd wailing and flailing takes the reader’s attention away.

Aside from thesespooky set pieces, Skibell’s long novel is remarkably short on atmosphere. Itwould be hard to identify a more opulent place and time—thatglittering world of Klimt and the Vienna Secession, where innovation sparked inevery corner of the arts and intellectual thought—yet we get only glimpses of whatit all looked like, and rather impatient ones at that. At one point, Jakobmuses about himself and Freud: “How absurd we seemed . . . with ourlate-empire beards, and comical pince-nez and other turn-of-the-centurysartorial fripperies.” Why so world-weary? Readers hoping to besecured firmly in this world need more such fripperies here, not fewer.

Do these flawsconsistently distract readers from remaining absorbed in a complex story? Theydo. Should Skibell go on to write more historical fiction? Undoubtedly heshould. Serious novelists who continue to learn from their imperfections areamong the most curable romantics of us all.