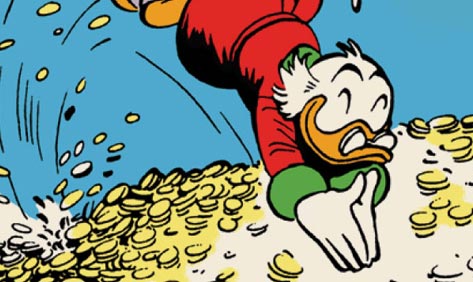 Neither my mom nor my dad ever bought me any comic books. Certainly, not for Christmas. I suspect that doing so would have violated the Parents’ Code. In fact, I’m not entirely sure they ever really distinguished between comics and the daily cartoons and “funnies” that ran in my hometown newspaper. In the 1950s, though, every drug store devoted one or two revolving racks to Walt Disney and DC comics (Marvel only took off in the 1960s). Kids would stand quietly, as they plucked out issues of Richie Rich, Archie, or Superman and surreptitiously devoured them in situ, until some grouchy manager would yell, “What do you think this is, a public library?” Favorites, like Justice League of America, Tales from the Crypt,  Green Lantern, or Uncle Scrooge, would be saved for actual purchase and quiet delectation at home, often accompanied by an Orange Crush or a mug of hot chocolate.

Those pulp-paper fantasy worlds — all in color for a dime — were at least slightly illicit, something that preteens got involved with on their own, entirely without grown-up approval. (Not knowing any better, I thought for years that Archie’s friends Veronica and Reggie were called Vero Nye Ka and Ree Ghee.) In my own case, my folks didn’t actually object to comics, as many parents did, but they pretty much felt the things were a waste of time. Reading books might itself be a bit weird, but obviously okay, since books were part of school, and doing well in school was clearly a good thing. But comics were more like candy, just flashy wrappers without any nourishment. Cheap thrills.

But strangely universal ones. French kids, I would later learn, gravitated to Hergé’s Tintin and Goscinny and Uderzo’s Asterix, though I was in college before I discovered their clever, and slightly more respectable, adventures. (Philip Pullman, author of The Golden Compass and its sequels, once chose Hergé’s The Castafiore Emerald as one of his forty favorite books of all time.) For me, as for many of the baby boomer generation, the entry-level drug to comics addiction (and then to collecting — never forget collecting) were the adventures of Donald Duck and his skyzillionaire Uncle Scrooge.

Last year Fantagraphics began to publish omnibus editions of all Carl Barks’s comics about these immortal denizens of Duckburg. Like the Simpsons’ Springfield or Garrison Keillor’s Lake Wobegon, Uncle Scrooge’s hometown features a recurring cast of supporting characters: the Junior Woodchucks Huey, Dewey, and Louie, the larcenous Beagle Boys, the loathesomely lucky Gladstone Gander, the hapless inventor Gyro Gearloose, and that befeathered heartthrob Daisy Duck, among others. As for the visiting con men, nabobs, and shyster lawyers, who are too numerous to count, most of them arrive with their eye on some lost treasure or the contents of Uncle Scrooge’s enormous Money Bin.

The first Fantagraphics omnibus, titled Lost in the Andes, opened with that title story, in which an expedition, à la King Solomon’s Mines, searches for the mysterious source of square eggs. Eventually, Donald and his three nephews stumble upon the lost realm of the Plain Awfultonians — who all speak with southern accents because of an ancient visitor named Rhutt Betlah. To complement this classic, the album also reprinted “The Golden Christmas Tree,” in which a witch tries to destroy all the Christmas trees in the world; the thrilling “Race to the South Seas!” pitting Donald and Gladstone against each other; and that zombie chiller, “Voodoo Hoodoo,” which — despite the objectionable period depictions of Bop Bop and Bombie the Zombie — is overtly critical of the West’s exploitation of Africa, and, in the end, quite touching. There are also nine “short stories” and a series of illuminating “story notes” by various Barks scholars.

This same format is repeated in this year’s offerings,  the appropriately seasonal A Christmas for Shacktown — the title story belongs among the great holiday weepies — and the inaugural Uncle Scrooge volume, Only a Poor Old Man. That self-pitying lament always makes me smile, given that Scrooge is the richest “man” in the world and his chief exercise is frolicking in his Money Bin, “home to umpteen-centrifugillion dollars.” As he says: “I like to dive around in my money like a porpoise. And burrow through it like a gopher. And toss it up and let it hit me on the head.” In the second big story of that collection, “Back to the Klondike,” we are given a glimpse of the young Scrooge — fiercely indomitable and willing to sacrifice everything, even his personal happiness, in the pursuit of the fortune he dreams of.

“Back to the Klondike” and, to an even greater degree, “A Christmas for Shacktown” — when Huey, Dewey, and Louie and their uncle Donald desperately try to raise money to buy a toy train for the poor children of Duckburg — underscore that Barks’s stories possess more depth than one might expect. Still, the brightness of the colors, the flat, straight-on panels, the silliness of the gags (so similar to those in early film comedies and cartoons) imbue these albums with a 1940s- and ’50s-style optimism and bounce, a sunny naivete. Never such innocence again. Underground comix and contemporary graphic novels may be more visually and textually complex — replete with chiaroscuro, jagged lines, cinematic shifts in perspective, sexual content, and overall archness in tone — but they exude heaviness, a desperate sophistication. They frighten as often as they entertain.

Not so Donald Duck and Uncle Scrooge. Barks once formulated what he called “The Code of Duckburg”: “Life is a long drawn out affair, and today’s disasters will by and by be the belly laughs that you sprinkle in your reminiscences.” In essence, these comics offer what one finds in all Golden Age stories, whether they are mysteries, ghostly tales, or swashbuckling accounts of derring-do: cozy adventures. One reads happily, safe in a well-made plot, where one can enjoy the marvels along the way, before the final tile falls into place and the story comes to its preordained end. One might  even liken these duck tales to Victorian melodramas, where everything is perfectly timed and executed and both the heroes and villains are conventional stereotypes. To Barks, comic book stories were nothing less than “plays performed upon a gigantic stage that readers hold in their hands.”

Carl Barks was born in Merrill, Oregon, in 1901, grew up in a farming family, and eventually held a number of blue-collar jobs. He knew what it was to be poor and to work hard for a living. But his knack for drawing — he taught himself by imitating Winsor McKay (Little Nemo) and other early cartoon masters — eventually led to employment with Walt Disney’s factory of animators. According to Donald Ault’s introduction to Lost in the Andes, Barks’s “first work was as an animation in-betweener, doing what for him was the tedious filling in of drawings for smooth motion between the animation director’s key frames.” Still, his talent was soon recognized. Ultimately, “Barks produced a massive volume of work at Disney, first as one of the lead story men on over 36 Donald Duck animated cartoons between 1936 and 1942, and then as writer-artist on over 500 comic book stories and countless cover gags, amounting to over 6,000 pages of writing and art, from late 1942 until June of 1966 — when he officially ‘retired’ only to enter a 35 year career of creating oil paintings, mostly of the Disney Ducks.” He died in 2000 at the age of 99.

While Barks turned out hundreds of one-page skits and gags, he usually made his longer stories into epic quest-adventures. In “The Golden Helmet,” for instance, Donald and his nephews need to track down a lost Viking artifact before it is found by the evil Azure Blue and his snake-oily lawyer, Sharky. After all, whosoever possesses the golden helmet will be the rightful ruler of all North America. Yet like Tolkien’s One Ring, this ancient relic both corrupts and coarsens even the most high-minded.

In like vein, Uncle Scrooge, despite numerous, Rube Goldberg-like safeguards, is constantly losing his money, either being robbed by the Beagle Boys or being dispossessed of it through some legalistic mumbo-jumbo. Inevitably, he hires Donald and Huey, Dewey, and Louie — the three boys for 30 cents an hour — and the ducks then undertake some complex operation, usually in exotic locales, either to restore the money or forestall its loss. In just these three volumes, Barks’s heroes visit the underwater city of Atlantis, go in search of El Dorado and the “Gilded Man,” trek deep into the African jungles to confront the witch doctor Foola Zoola, land on a South Sea island inhabited by the Lilliputian-sized Menehunes, and even discover the mystical realm of Tralla La.

While Scrooge is remarkably frugal, not to say stingy, there’s nothing essentially corrupt in his character. He made his wealth, he says, “by being tougher than the toughies and smarter than the smarties! And I made it square!” Donald Duck usually works as a lowly museum guard and is a kind of put-upon Everyman rather than the short-tempered character of the animated cartoons. Huey, Dewey, and Louie are ever resourceful, especially when they can consult their Junior Woodchucks manual, one of those magical books that seem to contain all knowledge. I just wish that these Fantagraphic albums reprinted more stories about the disastrous inventions of my childhood favorite, Gyro Gearloose.

If you read these comics long ago, as I did, or if you carry around fond memories of the old Duck Tales television series, as I do (usually watched in company of my three sons), these Carl Barks collections provide the only kind of time machine that really works. They will take you back to those thrilling days of yesteryear, when ducks were ducks and law practices were called “Squeezem, Fleecem, Skinem, and Skip” and all the world looked fresh and new. To allow readers of any age to see, if only for a little while, with the eyes of childhood is a rare, even priceless gift — especially on Christmas morning.