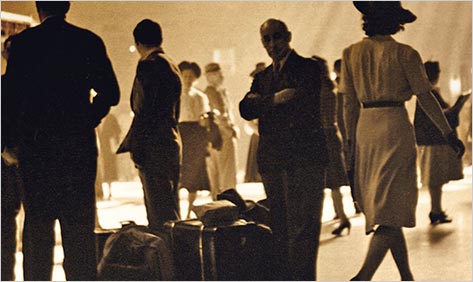 Light is central to Lauren Belfer’s historical fiction: her titles attest to it. City of Light (1999), her impressive first novel, built its story around the development of electricity in turn-of-century Buffalo, New York. Belfer’s new book A Fierce Radiance, set in Manhattan during World War II, focuses on the race to mass-produce viable antibiotics—penicillin and its “cousin” molds—not just to fight everyday illnesses, but as a strategic weapon against battlefield infections. Her appealing heroine, Claire Shipley, a Life magazine photographer assigned to document this quest, notes that “The ancient Greek derivation of the word photography was ‘to write with light.'”

Claire’s name, of course, is derived from the Latin for clarity, and as a photojournalist, it’s her job to see, illuminate, and capture on film what ordinary mortals often miss. Belfer writes, “Claire’s renowned colleague Robert Capa said that if you didn’t take sides as a photographer, you were nothing but a voyeur.”

As in City of Light, A Fierce Radiance mixes fact, fiction, romance, murder, and debates about who should profit from scientific innovation to create a capacious, sometimes melodramatic but always absorbing tale. Like the headmistress in Belfer’s first novel, Claire is stalwart, independent, and beautiful to boot, a hard-working, proto-feminist, single parent in her late thirties.

The novel opens three days after Pearl Harbor. Claire has been assigned to shoot the first human test of penicillin at The Rockefeller Institute, a research facility funded, she reminds us repeatedly, with the ill-gotten wealth of robber barons. Claire witnesses the brief, miraculous revival of a 37-year-old banker dying of blood poisoning from an innocuous scrape—the same sort of infection that killed Claire’s two-year-old daughter nearly eight years earlier. Although the patient dies—because they do not yet have enough of the medicine, laboriously produced by growing green mold in milk bottles—the experiment is deemed a success, having proven that penicillin can suppress staphylococcal infections.

The physician in charge of this trial is James Stanton. It doesn’t take a clairvoyant to know where the initially “diffident” (one of Belfer’s favorite words) relationship between divorced Claire and unmarried Jamie will go. Belfer’s otherwise workmanlike prose takes on purple hues and a peculiar fondness for the word “upon” when she writes about sex and romance—”finally he found her lips upon his own”—but, fortunately, this bug isn’t fatal to her novel.

Secondary characters drawn from life, including Henry and Clare Booth Luce and George Merck, add texture to Belfer’s tale, as does a somewhat forced intrigue involving competition over potentially lucrative drugs. Jamie’s younger sister, a gifted researcher at the Institute, is on the brink of a major breakthrough when she dies under mysterious circumstances. Does Claire’s long-estranged father, a sweet man but ruthless businessman—who’s bought a pharmaceutical company that’s working feverishly to develop and patent new antibiotics—have anything to do with her death? Is it wrong to seek profit from medicines? Is it possible to strike a compromise between idealism and practicality? Do different rules apply during wartime? Can Claire and Jamie’s relationship survive the hazards of war and moral uncertainty?

These are just a few of the questions framed in Belfer’s artful composition, which captures the fragility and anxiety of life in wartime New York in crisply developed shades of black, white, and gray.