A God in Ruins

Kate Atkinson’s A God in Ruins follows the life of Teddy Todd, younger brother of Ursula Todd, the main character — or characters — of the author’s previous, extraordinary novel, Life After Life. This naturally brings up the question of whether you need to have read the earlier book in order to understand this one. The answer is yes, if you want to take in the full force of Teddy’s having been handed the particular fate set out in these pages, rather than one he might have had if his creator had followed through on other eventualities. If this sounds vague, it is unavoidably so, as I don’t wish to reveal too much about the previous novel and its turns and volte-faces to those who have not yet read it. I will say that Life After Life is, among other things, a brilliant foray into the mysteries of time, chance, and contingency, and a demonstration of the audacity of fiction. That novel is the most radical expression of the theme that shows up repeatedly in Atkinson’s earlier novels: People live lives shaped by incidents of which they are unaware: a dead sibling, missed connections, fortuitous conjunctions, and buried reverberations of past tragedy.

Until the very end, matters are considerably more straightforward in A God in Ruins, though it does slice back and forth in time, as has become almost the norm for novels these days. Once a dreamy boy who would like to be a train driver, Teddy becomes a young man who sets out to be a “farmer poet” but finally succumbs to what seems to be his fate: a meaningless, stultifying position in a bank. Then comes 1939 and the war. Teddy becomes a bomber pilot, a calling for which, it transpires, he has a particular aptitude. His aircraft is the Halifax, and throughout the novel, Atkinson provides enthralling descriptions of the plane’s features and the talents and courage of the crew, infecting the reader with her own admiration for the under-sung heroics of the machine and the men who flew it. 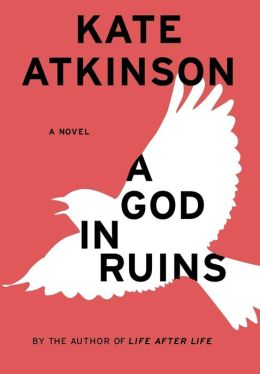 Still, the novel is the farthest thing from an RAF action drama, and its movement is all against war. Teddy’s gentle soul is blighted by his part in laying waste to whole cities and the murder of civilians — even if, at the time, he could not see that this was, from 1942 on, increasingly the aim of Bomber Command. The devastation throws a pall over his life, as does the memory of dead comrades and the inexcusable profligacy with airmen’s lives exercised by those directing the bombing campaign. According to Atkinson, 55,573 British airmen were killed during the war, many of them, it is clear, on missions that were pointless except as displays of RAF might. Indeed, Teddy’s last flight is a prime and fatal example of this, and this novel is as concerned with war’s appalling death and destruction as its predecessor was.

Meanwhile back in civilian life, Teddy ends up marrying Nancy Shawcross (who was given an alternate fate in the earlier book). He gets a job teaching grammar school, which he loathes, and later falls into writing a nature column for a small Yorkshire journal, which, in time, he manages. The couple have only one child, Viola, “the solitary arrow they had shot blindly into the future, not knowing where she would land.” As Atkinson goes on to observe, “They should have aimed better.”

Nancy dies in her forties, and events connected with that event coalesce into one of the novel’s most cunningly contrived and shocking plotlines. For one thing, her untimely death leaves Viola psychologically — or, perhaps more accurately, spiritually — damaged, and she blossoms into a truly deplorable representative of the “me generation.” Self-absorbed, self-righteous, and self-pitying, she has two children by an upper-class druggie, would-be artist, and general loser. They live in a London squat and later a commune, and name their son Sun and their daughter Moon. We follow the lives of these unfortunate children, and the neglect and cruelty visited upon them by their feckless parents, and on, then, into their adulthood.

Viola, who eventually becomes a novelist, is almost too bad to be true, but her awfulness, negligence, and later officiousness in ushering her aged father into the hinterlands of institutional care, do provide bleak comic mileage. She also supplies the eyes through which the reader is treated to one of the more ghastly British phenomena of the present day: drunken prenuptial hen- and stag-parties rampaging through the streets of tourist towns. Throughout the novel, a note of lament sounds for the state of Britain — its lack of decorum, abandonment of frugality, and overall cheesiness — a note that swells, at times, into editorial dirges that are not quite of a whole with the novel.

On the other hand, the idea of what has been lost or will be lost with the death of individual people, with their own unique consciousnesses, is powerful and is part of the story’s narrative weft. Teddy, now an old man, revisits the village and house where he and Nancy had spent their first married years. It is half a century on, and

nothing remained of himself or his past. No one now but Teddy would ever know that once he and Nancy had huddled by the great Aga in the kitchen while the wind blew up the hill and whistled through every room. . . . No one would know that their black-and-white collie had been called Moss and slept contentedly on a rag-rug in front of that great Aga, while Teddy drafted his Nature Note in a reporter’s notebook and Nancy, a ripe seed-pod about to burst, knitted little lacy things for the baby they were about to meet.

It would all die with him.

And, just to provide an example, at one point we find Sun, now “Sunny,” rooting through his grandfather Teddy’s old nature notebooks in an attic, wondering what they can mean. The expression “truffling out primroses” strikes him, but he will never know, as we do, that the expression was originally his dead grandmother Nancy’s, uttered in circumstances that give it great consequence in Teddy’s life. Our knowing that its full meaning will be extinguished with Teddy’s death provides us with a little glimpse into the void, as does the novel’s finale, a denouement about which I can say nothing — for now, that is, until you’ve read it yourself. A God in Ruins will fuel endless conversations among readers, and I can’t wait to get started.