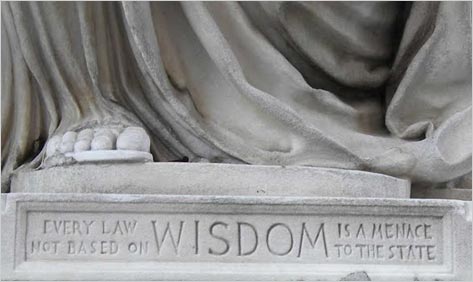 Sergio de la Pava’s first novel, A Naked Singularity, is 700 pages long and was originally self-published, but now, thanks to a long slow swell of enthusiasm on the Internet, it is available in a beautifully designed — if not 100 percent copyedited — paperback from the University of Chicago Press, and I strongly encourage you to overcome whatever hesitation the phrase 700-page self-published novel may inspire in you and pick it up. It is a beautiful monster of a book, a novel that left this reviewer, at least, feeling like maybe there’s some point in reading novels — and writing them — after all.

Casi, the narrator of A Naked Singularity, is a twenty-four-year-old Colombian-American public defender in Manhattan, an occupation he shares with de la Pava (about whom little else is known, except that he likes boxing and, according to his author bio, “does not live in Brooklyn” — at a guess, I’d put him in Queens). The novel is extensively informed by its author’s experience; it gives us a worm’s-eye view of the New York City criminal justice system, which de la Pava describes, plausibly, as a maddeningly slow and unequal contest between feckless defendants and hypocritical judges. So for instance we meet Rory Ludd, a black man who has been locked up for loitering in a public park; he’s about to be released when he has the bad sense to shout, “TOTAL BULLSHIT!” To which the judge replies, “Well the situation was one of your own making young man. If you don’t break the law you don’t get arrested it’s as simple as that. I do not stand for that kind of language either. This is a goddamn courtroom not some corner hangout!” And, poof! Ludd is back in jail.

De la Pava has been compared to the novelist William Gaddis, a great renderer of American speech in all its odd registers, and the comparison isn’t inapt: the comma-free prose of A Naked Singularity feels almost embarrassingly contemporary, as if we were watching a new literary norm hatch from its egg. De la Pava’s long courtroom scenes, told mostly in dialogue, also recall Gaddis’s comic novel A Frolic of His Own, except that where Gaddis entertained the reader with the absurdity of civil procedure (my favorite instance of this being the lawsuit brought by the Episcopal Church against the Pepsi-Cola Corporation for trademark infringement, on the grounds that “Pepsi-Cola” is an anagram of “Episcopal”), Casi’s story vibrates with grim intensity. Years and lives are on the line; one of the things A Naked Singularity captures best is Casi’s perpetual overcommitment, his impossible attempt to do right by too many people who, too much of the time, can’t do right by themselves. There are a number of good novels about work (Ed Park’s Personal Days, for example) but not so many about overwork, and this is one of them.

Casi begins the book with a perfect record: all the cases he’s brought to trial have ended in acquittal. But the reader knows, maybe better than he does, that his winning streak can’t last forever. When he finally does lose a case I can only describe as extremely minor (it involves the attempted theft of some painting supplies) and which, let the record show, occupies nearly fifty highly engaging pages of the book — this testifies both to de la Pava’s skill as a writer and to the fact that there is something inherently compelling about legal proceedings — something in him snaps. The consequences of his breakdown, and his subsequent, desperate attempt to return to a state of perfection, occupy the second half of the novel. They are implausible but entertaining.

As the novel goes on, though, it becomes less about justice — with the notable exception of a death-penalty case Casi has taken on pro bono — and more about, well, about books. It’s no coincidence that the archvillain whom Casi must eventually (sort of) confront is named Ballena, the whale: the book has become a wacky Moby-Dick, with a shout-out to Genesis when an organization with the nakedly Pynchonian acronym SERPENT holds its annual convention in a luxury hotel called The Garden. To me, this postmodern play reads like a symptom of exhaustion: de la Pava either can’t tell his good ideas from his bad ones, or, 600 pages in, he doesn’t care, and there’s no editor around to throw a bucket of cold water over his head.

This is not the novel’s only problem. Like Infinite Jest, to which it has also been compared, and without which it would probably never have existed, A Naked Singularity drags in places. Did we really need, e.g., the six-page synopsis of an in-flight movie? Or the nine pages of bad poetry that Casi reads to a cute child? It’s nice to see de la Pava experiment with what he can do with (or to) the reader, but the result is that the reader too begins to experiment with how much he or she can skim, or skip. And unlike anything that happens in Wallace’s work, there are places where A Naked Singularity reaches for an intelligence that it doesn’t quite possess. Casi’s exegesis of Time, for example, begins, “Similarly, with Time the fact that we experience it as a linear procession of events does not mean that’s what Time truly is.” It ends by telling us not much that we didn’t already know.

Nobody’s perfect; but these dull patches have to be weighed against the things the novel does brilliantly. The death-penalty case that looms large in the novel’s second half is heartbreaking and, if an interview de la Pava did with Publishers Weekly is to be trusted, it’s also procedurally accurate. (It also involves Skittles in a way that weirdly foreshadows the Trayvon Martin case.) And despite his habitual lack of restraint, one of de la Pava’s best moves is to veer towards a story which never comes. At one point, fairly early on in the book, Casi and a colleague pass a construction hoarding in Lower Manhattan. It’s covered by a curtain, with a sign that reads,

UNDER NO CIRCUMSTANCES SHOULD YOU LOOK INSIDE

TO SEE MAN’S GREATEST INVENTION SINCE

THE WHEEL. AGAIN, WE URGE YOU

NOT TO LOOK INSIDE

What’s behind the curtain? I wonder. If there is any justice at all, moments like this will count for more than de la Pava’s first-novel indulgences do, and you’ll read A Naked Singularity.