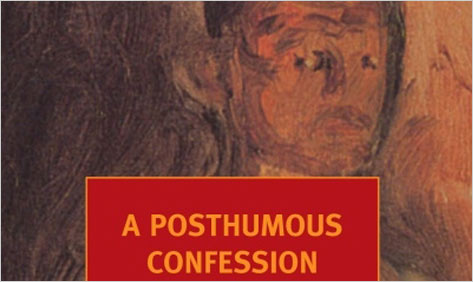 “Mywife is dead and buried,” begins APosthumous Confession unsentimentally, but the opening lines may as wellbe “I am a sick man, I am a spiteful man.” Like his translator J. M.Coetzee, Marcellus Emants owes a great debt to Dostoevsky. Willem Termeer, thenarrator of this 1894 Dutch novel, is a familiar type: the fragile narcissistwhose misanthropy masks a thwarted humanism. Termeer’s compact, self-laceratingtale of how he came to murder his wife casts him, not her, as the victim.

Although Termeer’sbackstory tends toward the facile—an aloof father, an angsty adolescence—theabsurdity of his endless self-analysis gives the novel a mordant humor, andrescues what risks becoming a pat psychological portrait. “In only twocases can I bear people who are like me: when they are inferior to me, and whenthey think they know themselves as well as I know myself and therefore think aslittle of themselves as I do of myself,” Termeer proclaims without evidentirony.

Termeeris prone to aphorizing, but like the Underground Man before him, is not secureenough in himself to let any statement stand without annotation. “Iseverything not illusion, and is illusion not everything?” he wondersridiculously, only to call out his own nonsense. “In fact, even the word ‘illusion’here is too pretty. Illusions too pine and shrivel in a tainted atmosphere,like plants in a hothouse that is overheated.” The depths of Termeer’sself-doubt often yield Emants’s finest prose.

While Emants is, asCoetzee notes in his introduction, “a lesser artist, a lesser psychologist”than his Russian forebear, his neurotic paroxysm of a novel is a worthy homage.