By JAY CANTOR and JAMES ROMBERGER, with José Villarrubia 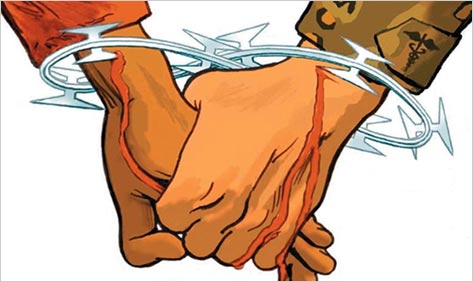 There have bynow been many American novels that in some way mean to address the 2001terrorist attacks on the United States as they took place in New York—and I usethat clumsy phrase because all the shorthand buzzwords that almost immediatelytook over the event seemed at worst to trivialize it, at best to return it tothe known and the predictable, to a realm in which everything was obvious andunderstood. As writers sought to address what happened—or to incorporate it,make sense of it, to express honest or contrived emotion, to wring wisdom fromthe horror or preen before it, to in some deep sense bear witness to the eventor, for that matter, merely take off from it—they failed in inverse proportionto their subject. It was just too big. It was not reducible to the tellingdetail. It could not be rendered whole. It could be approached sideways, or backwards,as with Don DeLillo’s Falling Man, which along with James Marsh’sweirdly time-scrambled before-and-after documentary film Man on Wire, aboutPhilippe Petit’s guerilla highwire walk between the towers in 1974, before theyformally opened, a coup that came off the screen like a terrorist operation,caught something of the uncanny in the fall of people from the towers and thenthe towers themselves. But the thingitself escaped.

The first shock of Jay Cantor’s and James Romberger’scomic book Aaron and Ahmed—onecould say graphic novel, but the about-the-author sketch of Cantor ripping openhis shirt to reveal a Superman costume makes comic book the way to go—is seeingthe planes fly into the towers. Across four appalling pages everything happens,both at once and in stop-time, here too fast for the eye or the mind to followor for memory to enclose, there too frozen, almost, to allow the viewer toreturn to the story that is taking shape. And this is because, along with oneAaron Goodman, an Army psychiatrist in a VA hospital in Kansas, you are notbearing witness; you are witnessing. You are an innocent bystander at thebiggest traffic accident-cum-St. Valentine’s Day Massacre ever dreamed up.

In the story, while Aaron tries to win his patients’ trustso he can get them to take their medication, he sees the first plane hit thefirst tower on the commons room TV just as his beloved girlfriend Carol calls: “Shewas flying from Boston to L.A. that morning.” She’s on the second plane: “‘Hi*acked*man with * boxcu*er*'” her voice breaks up. Aaron instantly realizes what’sgoing to happen: he’s going to watch her die. And you do.

From a vantage point in the room with Aaron, but ten feetfarther from the small TV monitor, suspended hospital-style near the ceiling,in the comic book you first see a second, tiny plane nearing a second, tinytower. One patient holds his hand over his mouth, others are oblivious, Aaron’smouth is open in a silent scream as his body jerks. Then you are inches fromthe TV, everything is bigger, and in two confusing overlapping images, withblue sky, grey building, white plane, and yellow explosions, the plane seems togo straight through two towers at once. A panel shows Aaron holding his cellphone to his ear, his blue eyes crying blue tears as the scream in his mouth stillwon’t leave it; a small cut-in, easy to miss in the visual noise of the page,shows a red Carol in a green plane as she clutches her phone to her ear, andthen, in a pinkish red, even though your perspective is from the foreground ofthe action, where the building is closer than the plane, the plane smashinginto the tower appears at least twice as big as the tower itself. That is thesecond, right-hand page of a two-page spread. You think you’ve seen whathappens.

You turn the page and you realize you have seen nothing. Evenif, in your own real life, you saw what happened, you didn’t, not as writer JayCantor, illustrator James Romberger, and here especially colorist JoséVillarrubia, make it happen. Faced by a right page where the dominant coloracross seven small panels is a blindingly bright yellow, a left page, its imagepushing past the spine of the book onto the first inch of the right, shows whatis now the enormous, unstoppable, hell-fire red plane entering a far bigger butdefenseless building in an image that is at once inescapably pornographic and atthe same time nothing more, andabsolutely nothing less, than the historical event it depicts. And now you do see what it depicts in itssmallest details and all at once.

All therest of Aaron and Ahmed has to do isget out from under this sequence and live up to it: a frightening challenge. Itdoes so, first, by moving the action to Guantanamo Bay. Aaron volunteers: “Therehad to be a war to make the monsters who would do such things suffer,” hethinks as debris is still falling, “and I … I had to be a part of thatwar.” In darkness, we see the barracks going up. In a barbed wireenclosure, as if from a looming guard tower, we see hooded, naked prisoners. Wesee casual torture. We see waterboarding. But then the ante is upped: a man isstrapped to a torture wheel. There is a kennel; cages perhaps three feet by twofeet by two feet alternately hold dogs and men. “This is where I started acombination of sleep deprivation, followed by hypnosis. And severe operantconditioning,” says one Negroponte, a scientist in charge of interrogationand Aaron’s mentor and boss. “It takes nine months to turn a man into adog.” It’s a reverse birth; the definiteness of the statement is chilling,but not nearly so scary as what Aaron and we see next. There are two men kneelingon the floor of the kennel, in orange jumpsuits, who are dogs. But theexperiment is meaningless, Negroponte explains: “You can make a mansalivate at dog food this way—but you can’t make him blow himself up.” That’sthe question all of Negroponte’s, and now Aaron’s, experiments are meant to answer:what makes people into suicide killers? How can they be stopped? How can theybe used? “For that,” Negroponte says, “you need the right memes.”

Following The Deathof Che Guevara, from1983, Jay Cantor’s second novel (“in five panels”), Krazy Kat, from1987, featured Krazy Kat up against the wall of post-Hiroshima depression andsuffering the cure of Dr. Ignatz Mouse, who substitutes psychoanalysis forbricks—and that’s just the start. The book was fast on its feet: a hilarious,startling allegory, never predictable, George Herriman’s 1913-1944 newspapercomic strip translated into post-war black humor, but with the souls of cat,mouse, and dog—Herriman’s Offissa Pupp—not only intact but infused with post-warsex and money. Cantor’s third, in 2003, was GreatNeck: a morethan 700-page generational saga with a cohort of characters tied so closely tohistorical events they lumbered through the book as abstractions, even when oneof their number, a comic strip artist, turns his compatriots into bestsellingsuperheroes, a kind of left-wing Fantastic Four. With his wife, Marguerite VanCook, James Romberger has, among other projects, worked on the Papercutzrevival of Tales from the Crypt forMarvel Comics, and with the late David Wojnarowicz on the 1996 graphic novel Seven Miles a Second. BothCantor and Romberger have done memorable work with comics—but compared to Aaron and Ahmed they were working towardcomics, not in them. Aaron and Ahmed is a long, deliberate story, toldwith the comics equivalent of crane and tracking shots, with the elongated,sinister faces of horror comics, the exaggerated gestures and facialexpressions of war comics, and something not seen in any comics genre, exceptperhaps romance: still, silent panels where dialogue fails, time is suspended,and speech balloons would insult the characters.

At Guantanamo, Aaron, who has no real problems withtorture except for its uselessness, takes on one Ahmed, as an experiment: tosee if he can get him to tell what he knows by treating him decently, as withhis VA charges by winning his trust, by initiating a classic psychoanalytictransference relationship, and by giving him lots of estrogen. It seems towork: yes, Ahmed admits, he was Bin Laden’s driver. But he had problems withBin Laden: “They say they’re infidel,that we’re unclean until we killthem.”

Is that where suicide killers come from? Memes, Negroponteexplains to Aaron, as Aaron will in a sideways manner explain to Ahmed, who ina direct and unsurprised way will explain back to Aaron, are “viral ideas”:like genes, their purpose is to perpetuate and replicate themselves. But if asuicide killer blows himself or herself up, Aaron asks, doesn’t that kill thememe, the gene-idea? The carrier dies, Negroponte explains; the meme, the idea,flies over the earth in a million fragments, its virus infecting peopleeverywhere.

Soon enoughAaron and Ahmed are set off on an existential quest, a spy mission, aninfiltration, a mystical journey, a conditioning experiment in which Aaron ishis own subject, a hopscotch through history that will take them into the lairof the Old Man of the Mountain, who may be Bin Laden and may be Hassan ibnSabbah of the 12th century, as alive today as he was bent on death then. “Thesheiks get the imams to say that God desires a world that’s pure and empty,like our desert,” Ahmed tells Aaron, and in a training camp in Waziristan,we see it, magnificent and barren, a beacon and a graveyard, an Arabian MonumentValley. This image is Romberger at his pure-comics best, stunning the eye that hehas, over the previous pages, trained to expect a conventional graphicnarrative of this-leads-to-that, now exploding the concepts he is illustrating;when Romberger blows people to kingdom come it feels as if the phrase wasinvented for him. Cantor’s touch is more subtle, a novelist getting inside theway people talk—”Hormones?“says another Guantanamo doctor to Aaron’s insistence on estrogen therapy toprotect himself from Ahmed. “You never saw that movie with Charlene what’s-her-name?You’ve never heard of women killers?”—to validate the urgency of themelodrama he will use to keep your breath catching in your throat.

The characters, not only Aaron and Ahmed, but evilgeniuses Negroponte and the Old Man in the Mountain, small-part actors, evenstooges, walk-ons, and extras, never are insulted; some are ennobled, some arekilled off without a thought, some go on to live and kill another day. Theending, after a story that so gains in richness even a sequel would seem like acheat, is not what you want—an irony straight from the end of Night of the Living Dead, andthen a second ending, which you’ve seen in horror comic before, and isn’t whatyou want either. But more than that, it isn’t what the characters want, and bythis time, what they want, their discovery of their own ability to know whatthey want, and their ability to value it, is like the legendary jewel of somany Arabian nights before theirs.