The author and critic on the impossible choice of reading favorites. 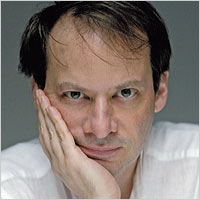 When we asked Adam Gopnik, prolific New Yorker contributor and author of The Table Comes First, to pick three favorites, he sent this note along with his selections:  “Asked to name his three favorite books, every author turns away from nature, toward display. What would be an interesting, an intense, a surprising, if at least semi-honest declaration? Why not…Dr. No, Great Expectations, and Updike’s early stories? Not false; I love them all. Or Karl Popper’s The Open Society and Its Enemies, Proust’s great book, and Kenneth Tynan’s Diaries? That covers a tremendous amount of ground, from the theory of freedom to a critic’s love of inflicting flagellation, and I can’t imagine life without all of them. But it’s too late, in life and on this evening, for calculation. So I shall try to name, as honestly as I can, the three books that have given me the most sustenance, nourishment, inspiration, over a lifetime’s print addiction.”

“The most entertaining book ever written, bar none, and giving no quarter. A hero equal parts Falstaff and Socrates with a strong seedy pinch of Rumpole of the Bailey, there has never been a book so alive on the page, with the eerie quality of reproducing, exactly and yet with heightened style, the sound of London table talk two hundred years ago. The aphorisms (‘Could anyone else have written this book?’ ‘Yes, sir, many men, many women and many children.’) and the insight are peerless: whole careers of sub-Kael critics can be neatly summed up in Dr. J. s remark, of a would be literary wise guy, that though what he says has the appearance of wit, there is no wit in it, merely abuse, and the publication program of many a post-modern scholar can be summed up in his remark that truth is a cow that will yield some people no more milk, so they have gone to milk the bull. On grief, good fellowship, the meaning of existence, and why it is better to eat at restaurants than at a friend’s house, the good Doctor remains the wisest bed friend.”

The Lord of the Rings

“Boy, did I pause before confessing this one — my good wife, reading over my shoulder, squeals, ‘Not that!’ — and I am not absolutely sure if it will live its next fifty years as triumphantly as it has lived its first half century. No matter — or little matter, anyway. Since I lost myself at Rivendell at the age of twelve, I find myself, at least once a year right through, and many times a month in pieces, returning to this most hypnotically addictive work of modern story telling. It’s uncanny how much it also remains the most natural well of explanatory metaphor at hand. Trying to explain why Churchill understood Hitler in a way that Hitler could not understand Churchill, I think of Gandalf and Saruman; trying to find a an image for our modern on-line screens, which see all yet often over-rate the worst, I think of the wizard’s ‘palantir’; trying to describe hockey games between gallant Quebecois and brutish Americans, I think of Elves and Orcs. I am not one of those, like my own brother, who learned Elvish, yet I recognize that this taste is a boy thing; perhaps a sixties childhood thing; but it is, beyond argument, my thing. (‘I wish you could put Proust in place of Lord Of The Rings‘, the voice over my shoulder says. I wish so, too.)”

“Once again, a choice so predictable, familiar — there’s a mediocre band called that! — that it is almost embarrassing to name it. But there it is: for rhythm, charm, delight, New York voices heard and sudden glory of small epiphanies achieved, no book has entered so deeply, intertwined so entirely, as this one has into and with my mind. I shut my eyes and hear the book — the betraying friend talking candidly in bed with the betrayed husband in ‘Pretty Mouth and Green My Eyes’; the brother’s slang in ‘Just Before the War with the Eskimos’; the Chief’s tale of Paris woe told in Central Park in ‘The Laughing Man’ It is a book of matchless charm and heart — or call them humor and soul, but in any case the two things that really matter most — the only two things that really matter at all, truth be told — to literature. Reading it reminds us, as I wrote in my eulogy for Salinger, that real writing isn’t made from judgment, balance, or sober equilibrium, or a kind of synthetic paste of contemporary ‘issues’, as critics like to pretend. Writing is putting all your stars out, in the hope of putting all the reader’s lights out. What did Emily Dickinson say? Poetry is when it takes the top of your head off. This book does, and does it laughing.”