“This is a record of hate far more than of love,” Maurice Bendrix writes at the outset of Graham Greene’s The End of the Affair. Which sounds promising enough, but it turns out that Greene’s argument—on loan from Saint Augustine—is that hate confirms the existence of the hated thing, which creates the possibility, however remote, of conversion into love. To hate God is at least to acknowledge Him, and so the blasphemer is closer to salvation than the atheist.

Against the Country, Ben Metcalf’s debut novel, has blasphemy to burn. American exceptionalism, agrarian virtue, the goodness of children, and the value of a day’s work are all cut down to size, hacked up for firewood, and stuffed into the smoke-belching furnace that never sufficiently heated the half-wrecked farmhouse where the novel’s narrator grew up. More than a record of hate, Against the Country is a volcano of vituperation and gobsmacked disgust; as agitating, agitated, and blackly funny a novel as I expect to read this year.

Except for several dogs and a rooster dubbed Buttfucker, all the principal characters’ names are withheld. The narrator tells us he was born in southern Illinois but moved when he was young to Goochland County, Virginia, a fictional rurality set provokingly outside the all-too-real city of Richmond. His parents hoped to save the family from the poverty and iniquity of life “in town,” only to find those ills replicated in abundance, and supplemented by others besides. Thus, “I was worked like a jackass for the worst part of my childhood, and offered up to climate and predator and vice, and introduced to solitude, and braced against hope, and dangled before the lord our God, and schooled in the subtle truths and blatant lies of a half life in the American countryside, all because my parents did not trust that I would mature to their specifications in town.” 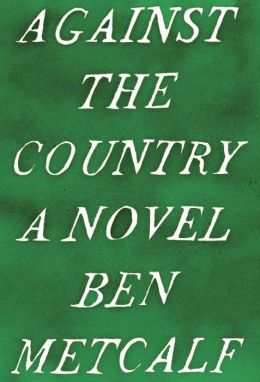 Short, sharp, pithily titled chapters grouped loosely into svelte “Books” are a welcome offset to the florid grammar and baroque beautiful derangement of the sentences themselves. No pretense of plot is made. You learn a few ways to kill a snake and many more to molest a chicken. There are sexual failures and conquests, a lake and a cornfield, various racisms and drug addling, a slew of car wrecks, drunk hunters firing from the comfort of their lawn chairs, and the special hell of the country school bus. The narrator’s abusive, delusional father—a construction worker and failed Salinger scholar—serves as the novel’s go-to bête noire, though a late chapter called “Kindnesses” explores some fondness for him. This is a swerve as jolting as any burst of sex or violence, and far more unexpected, as the narrator well knows. “I would follow this notion further,” he writes, “except that I think it a hair too late to introduce so fraught a motif as is kindness into what has thus far been an uncomplicated remembrance of the man.”

It turns out that the narrator’s father has recently died of cancer—or, possibly, of a morphine overdose, possibly administered by the narrator himself with a nurse’s collusion. Or maybe not. Either way, the death of the father has triggered the writing of the book, and if that’s not Freudian enough for you, try this: “Fathers write, and sons read, and sons then write, and fathers then die before they can read what their sons have written against them. It is a pity, pure, but unavoidable.”

Like Greene’s Bendrix, Metcalf’s lapsed-Catholic narrator is himself a writer, perennially alerting us to (or is he teasing us with?) the fabricated and possibly falsified nature of his own narrative: “Pretending to pretend I find no more honest, or dishonest, than pretending not to pretend, and neither of these masks will much, of itself, enhance the reality I pretend now to pretend not to pretend to.” “Subtle truths and blatant lies,” indeed.

What then to make of a book marketed as an “autobiographical novel” but prefaced by an author’s note stating that “the author’s own life will admit of no kinship with the narrator.” Metcalf, a Nabokovian at least as much as he is a Faulknerian, is playing some familiar mind games here, with us and/or himself. That’s fine as far as it goes, but his refusal of kinship with his own creation is a bit of—to use the country term for it—horseshit. All characters are the children of their authors, except insofar as the child is father to the man. But Saint Augustine, whose heavily novelized Confessions are nonetheless considered the world’s first memoir, believed that evil does not exist save as the absence of good, so I will suggest that lies (half-lies, metafictions, etc.) confirm the order of truth in their very attempts to subvert it, as opposed to fictions proper, which seek refusal or escape.

The narrator makes frequent reference to his attempts “to end all this,” “this” not being his own life (or his father’s) but the book he’s writing. The refuge has become the thing to escape from, like a crashed getaway car or a haunted house. Beneath its gut-bust cornpone and bracing rage, and perhaps despite its author’s own intentions or better judgment, Against the Country asks, and in its willfully cockeyed way attempts to answer, a fairly profound question: How do we mourn for something—a place, a time, a family—we aren’t all that sorry to have lost?

Justin Taylor is the author, most recently, of Flings, out now from HarperCollins. Read more at http://www.justindtaylor.net/.

Justin Taylor is the author of Flings, Everything Here Is the Best Thing Ever and The Gospel of Anarchy. His work has appeared in the New Yorker, The Believer, Tablet, Tin House and the New York Times Book Review. He lives in Brooklyn and at justindtaylor.net or @my19thcentury.