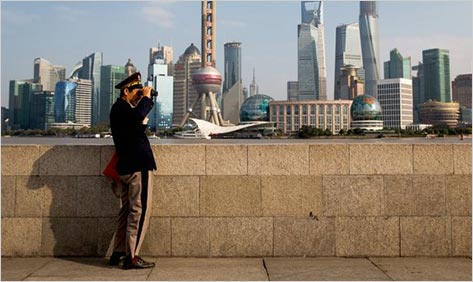 At the heart of Age of Ambition: Chasing Fortune, Truth, and Faith in the New China is an exploration of the fundamental paradox of modern China: the Party promises prosperity and demands loyalty, but as standards of living rise, so do Chinese in all walks of life begin to express more abstract desires — desires that the Party is loath to indulge. It’s a bargain that author Evan Osnos describes as “greater freedom in economic activities in exchange for less freedom in political life…sparking individual ambition and self-creation in one half of life and suppressing those tendencies in the other.”

Much like Philip P. Pan’s Out of Mao’s Shadow, Osnos’ book is loosely organized around series of profiles of Chinese citizens whose extraordinary lives and meteoric ascents illuminate the vast forces of history, technology, and opportunity that have buffeted their country in the past century. It’s as though China is so vast that it refuses to fit into frame and can only be viewed through its component parts.

These include Hu Shuli, founder of Caijing, a magazine permitted unusual leeway in its coverage of the Chinese government’s shortcomings; or Liu Xiaobo, the Nobel Prize-winning human rights activist whose own criticism of the Party has been met with far less tolerance. There’s Lin Yifu, a Taiwanese soldier who defected to the Mainland and went on to become the first Chinese citizen to serve as chief economist of the World Bank; or Tang Jie, a graduate student studying Western Philosophy who translates Leibniz into Mandarin but who also rails against what he considers the West’s hypocritical approach to his country.

These profiles sometimes result in the book feeling fragmentary, which is compounded by the fact that Osnos is drawing from pieces he previously published in The New Yorker, where he served as the magazine’s China correspondent from 2008  to 2013. But what distinguishes his approach is that Osnos refuses to focus only on the easy, headline-ready accomplishments of his subjects. Instead, he digs deep into their pasts so that we better understand from whence they came. We discover that Gong Haiyan, the founder of China’s largest dating website, soldered wires in Panasonic televisions before playing matchmaker, and that Macau’s “God of Gamblers” was once a humble barber before he hit it big at the baccarat tables.

In much the same way, Osnos doesn’t just dwell on sweeping statements about modern China; he also looks at the painful and ignominious stages the country has gone through prior to its emergence as a global power. Along the way, his easy assumptions about the Party and the Chinese people are challenged and troubled.

Now, any book about China is likely to fall victim to hyperbole. The country, its population, its influence on the contemporary world, all give the impression of being outsized. Osnos occasionally over-inundates the reader with figures and statistics that ought to be awe-inspiring, but which lose their power to impress as they accumulate one on top of the other.

However, he tempers these rhetorical flights with the Absurdistani details that anyone who has visited the Middle Kingdom knows all too well. His profile of Gong, founder of the Beautiful Destiny dating website, allows him to describe a country in which marriages were once arranged by work unit as it now contemplates a new age of romantic autonomy:

The sudden freedom had its problems. China had few bars or churches, and no coed softball, for example, so pockets of society were left to improvise. Factory towns organized ‘friend-making clubs’ for assembly-line workers; Beijing traffic radio, 103.9, set aside a half hour on Sundays for taxi drivers to advertise themselves; and CCTV-7, the military channel, organized a dating show for grunts.

These madcap details are no more plentiful and illustrative than when Osnos accompanies a Chinese tour group to Europe, a hilarious jaunt that says just as much about the new Chinese national character as any moment in-country. While one teenager exclaims “Oh my Lady Gaga!” in surprise, an older gentleman insists that China will overtake the U.S. as he stands in St. Peter’s Square, and all the participants wonder if they’ll eat anything in Europe other than Chinese food (the heavy emphasis on bread and cheese in the European diet “would give us indigestion,” their tour guide explains).

Perhaps the highest praise I can lavish on Age of Ambition is that it feels like China: sprawling, occasionally schizophrenic, but ultimately bursting with promise and power. Osnos’ love for and admiration of the Chinese people is palpable, and he has written a remarkably comprehensive, kaleidoscopic account of China’s rise. That he is disappointed in the Party and critical of its approach to governance simply reflects his high expectations for a country that is sure to define the future.

Quindlen Krovatin is a former Associate Editor of the Barnes & Noble Review. He lives in New York City.