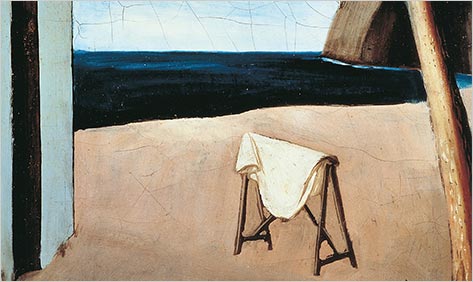 The Italian novelist Alberto Moravia (1907–90) was an expert at crafting obstinate characters who fruitlessly long to arrive at a systematic understanding of erotic troubles. In Contempt (1954) — the basis for the 1963 film by Jean-Luc Godard, a screenwriter drives his wife away with needling attempts at quantifying her affections. In Boredom (1960), a thirty-five-year-old man hopes to quash his love for a seventeen-year-old girl by gathering as much intel on her as possible, in a galling effort to transform her into a person devoid of any mystery: someone boring and easily forgettable. Like the men in these novels, the eponymous thirteen-year-old hero of Agostino (1944) — reissued this month by NYRB Classics — suffers when he tries to place a woman in an objective light. Worse still: in his case, the lady is his mother.

Agostino is neither as obtuse as the husband in Contempt nor as acerbic as the slumming, do-nothing bachelor in Boredom. Considering his tender age, his cluelessness with regard to sexual propriety is less likely to leave you grumbling aloud in irritation than the maschi of Boredom or Contempt. Moreover, judged in terms of its setting and brevity, Agostino recommends itself as an ideal literary beach read that can be soaked up in one or two sittings, so adroit is Moravia’s use of a seaside setting as a charm for psychological discovery and sand-encrusted epiphanies.

After describing how Agostino and his mother passed the early days of summer lazing about Speranza Beach, and the pride he takes in his mother’s bikini-ripe beauty, the author ends the first paragraph of his novella with this portentous statement: ”[Agostino’s] filial vanity and the turmoil of his infatuation would linger for many years to come.” Here, I thought of the magnificent ending to ”Araby,” James Joyce’s portrait of preadolescent disillusionment: ”Gazing up into the darkness I saw myself as a creature driven and derided by vanity; and my eyes burned with anguish and anger.”

Trouble enters in the form of a perceived rival for the mother’s attention. To Agostino’s dismay, she welcomes the overtures of a tanned young man she meets on the beach. Quickly they fall into each other’s company, their rendezvouses orchestrated around rowboat excursions upon the water. After the suitor fails to turn up one day, the mother lapses into a sulk. Knowing full well what has her down, Agostino nags her for not venturing into the sea. His ill manners provoke a slap whose sting is more mental than physical. Slinking off to a changing cabin to cry and fathom his hurt in solitude, Agostino meets Berto, a boy near his own age, who is engaged in a variant of hide-and-seek.

Initially, Berto rebuffs Agostino’s efforts to join his game. But the boy agrees to introduce him to his pals after Agostino makes Berto a gift of his mother’s cigarettes. Leaving behind the well-heeled families who congregate around Speranza, they make their way to the far less resplendent beach called Vespucci, where Berto introduces Agostino to his working-class friends, whose coarse behavior fills Agostino with intoxicating ambivalence. Presiding over the group of boys is a fifty-something lifeguard named Saro, who follows their antics with suspect bemusement.
As it happens, the boys to whom Agostino is introduced have already made note of his presence, on account of the attention they’ve paid in the preceding days to his mother. After Agostino tells them the name of his mother’s companion, they teasingly inquire about what sorts of things the adults get up to when they take the rowboat out the sea. Seeing these insinuations fly right over Agostino’s head, the lifeguard, Saro, asks one of the kids to fill him in on the birds and the bees. In the ensuing days, Agostino trails along behind the kids, who make no bones about giving him grief. To his bewilderment, he actually comes to relish, in a masochistic sort of way, their ragging him about his mum:

He didn’t realize it, but what attracted him to Vespucci, besides the company of the boys, was their brutal mocking of his mother and her alleged lovers. He could sense that his former affection was turning into an entirely different sentiment, both objective and cruel, and he felt he should seek out and cultivate the boys’ heavy-handed irony for the simple fact that it hastened this change. He couldn’t say why he wanted so much to stop loving his mother, why he hated her love. Perhaps it was his resentment at being deceived and at having believed her to be so different from what she really was. Perhaps, since he couldn’t love her without difficulty and insult, he preferred not to love her at all and to see her instead as merely a woman.

I hazard that you may be wondering how I’ve avoided invoking Freud up till now. The good doctor’s influence was no doubt in the air in 1942 when Moravia composed Agostino in Capri (where the majority of Contempt also unfolds). While I’d never wish to bar a discussion of the Oedipus complex in relation to Agostino’s attitude toward his mother, such theories were far away from me when I read the book. Moravia’s articulate capture of his protagonist’s inarticulate feelings, guesses, and internal intuitions is both mesmerizing and alarmingly immediate. For there is, in the book’s graceful sentences, a persuasive tone of candor about the son’s conflicted love for his mother, to which anyone who has been born to a much-admired woman can relate.