American Ghost: A Family’s Haunted Past in the Desert Southwest

Though the digital age may be an impediment to our relationships with the living, its tools are simultaneously connecting us to those on the other side. Through the speed and convenience of the Internet, researching one’s family tree has become easier than ever. In her book American Ghost, Hannah Nordhaus, author of The Beekeeper’s Lament, hopes to use any tools at her disposal to discover whether or not her great-great-grandmother Julia is indeed haunting the Santa Fe hotel she once called home.

Julia was born Julie Schuster in Lüdge, Germany, in 1844. At the age of twenty-one she married Abraham Staab, who had gone to Santa Fe, New Mexico, to make his fortune and returned to Germany to find a wife. Life in the nineteenth-century Southwest wasn’t exactly a piece of cake for anyone, much less a young German woman who knew no one in America and couldn’t speak the language. Julia and Abraham were already well acquainted with what it meant to be an outsider. They were both Jewish. But whereas in Germany they were always considered “other,” in Santa Fe their racial identity was established in the context of the white settlers around them. “If the Jewish community had been small and insular in Germany, it was even smaller in Santa Fe,” Nordhaus writes. “Jews had been dark-skinned in Germany. Now they were ‘white,’ at least when compared with the Indians and mestizo Spanish and free blacks and Chinese who lived beside them.”

But despite Abraham’s success as a businessman and the couple’s apparently tolerant new community, all was not well for Julia. One doesn’t end up a ghost by living a happy life, Nordhaus assumes. As Julia and Abraham’s home in Santa Fe is now a hotel, visitors who have claimed to see Julia’s ghost have offered ideas about what may have happened to her. Perhaps Abraham was abusive. Perhaps he didn’t love her. One psychic consulted by Nordhaus claims Julia drowned herself in her bathtub. Another insists she hanged herself. Several people claim that she lost a baby — and the very next day her hair went stark white. There are many theories – or, at least, many stories. 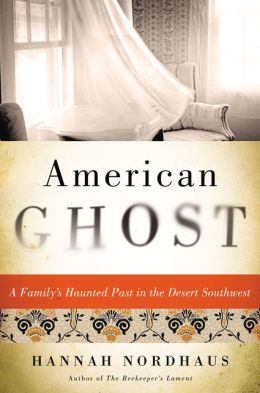 Throughout the book Nordhaus relentlessly pursues the truth. She consults historians (some who have already done research into the family), distant and elderly cousins, letters, and state records, and even makes a few trips to Germany to see what can be uncovered there. But she doesn’t confine herself to material investigation: psychics are brought in as well. In one ridiculous episode, she even eats a marijuana cookie to see if it will help her commune with Julia’s ghost. Alas, it only makes her anxious and sick to her stomach. There is no smoking gun, and Nordhaus acknowledges how unlikely it is that Julia is in fact an unrestful spirit. “Ghosts are not innocent until proven guilty. They are always guilty: present until proven absent. Absence of evidence, as they so often say in the world of the paranormal, is not evidence of absence. We want so badly for the dead to stay with us.”

But Julia did in fact lose a child — maybe even more than one. She was, perhaps, “disturbed” and, according to her daughter’s journals, did seek treatment for whatever ailed her. She had surgery at a clinic for women’s troubles in Germany. Nordhaus assumes this may have been a hysterectomy. If the reader had hoped at the beginning of this book for the mystery of what made Julia so unhappy to be solved, he or she may be disappointed. But those with an interest in the complexities of the American West and the Jewish immigrant experience there will find the interest generated by the facts in the case outweighs the disappointments of Nordhaus’s spiritual investigation. In her journey to find out what had happened to Julia, Nordhaus unearths a rather remarkable history of her entire family, with ties to the West and tragically — back in Europe — the Holocaust.

Julia’s much younger sister Emilie and her children became victims of Nazi genocide, a fact Nordhaus had never known. Emilie died at the age of eighty-one in the Theresienstadt camp. “Emilie had lived almost fifty years longer than her sister Julia . . . but she had died amid unimaginable horror: the last of her sisters, the last of her generation. Her ashes are lost . . . There’s a small plaque with her name in the Jewish cemetery in Paderborn. TO DEPART IS THE FATE OF ALL PEOPLE, reads a tombstone not far from the family plot. We are all mortal of course,” Nordhaus observes. “But how we depart: that makes a difference.”

In the beginning of the book Nordhaus writes that she was drawn to Julia’s story as one of strife and suffering. But time has changed her. “I am at an age now at which death lurks more obviously and takes more readily . . . Those we love will die, the body will decline, and then we too will die. We must seize these passing moments; there may be nothing else.” Nordhaus’s experience seems to prove that though we may seek definitive answers to our questions about the past, the journey getting there may teach us more about ourselves.