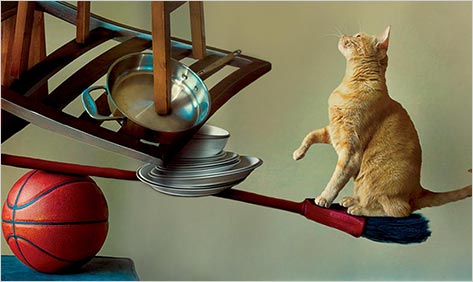 Coming across the work of Rivka Galchen is like spying a brand-new quarter in the street: arresting in its newborn shine, everything else old by comparison, the luck of the discovery exciting out of proportion to its face value. Her spotless metafictions remark on their own nature as writing; if a character vanishes “so completely that it seemed like a trick,” be sure the author is saying something too about the inherent trickery of storytelling. Yet for all its salient nowness — its multilayered construction partakes of extreme literary trendiness while its characters speak Trend as their native tongue — her work  is traditional in the extreme. That is, its very insistence on novelty is a twentieth-century convention. Her tacit acknowledgment of the influence of only the most illustrious forebears in this endeavor, from Kafka to Borges, is a mark of supreme ambition. Every truly ambitious writer will claim their bloodlines run direct from the clan of the great.

You don’t attain membership in that particular club just by saying so (or even working its filaments through the weft of your work), of course. The question that must be asked is whether Galchen’s stories fulfill the promise of her lauded 2008 debut novel, Atmospheric Disturbances, reviews of which almost all finally took refuge in name-dropping; exalted modernists were the ilk most frequently cited: Pynchon, Sebald, Murakami, Bernhard.

Although she would come around to a definite answer more circuitously — and in so doing demonstrate an inherent and modern suspicion of anything as simple or certain as an answer — the old-fashioned response, on the basis of her new collection, American Innovations, is an unhesitant yes. These stories almost all without exception follow through on their pledge to astonish; every paragraph has intention firmly lodged behind it. It’s a paradox, then, that her project is an investigation of unreliability. No — not the unreliability of the narrator. That’s been done. (Not least by Galchen, in her novel.)  But the unreliability of everything. Including one’s furniture.

In the collection’s weakest story (let’s start there), this theme is made most manifest: in “Once an Empire” the narrator comes home to her Brooklyn apartment one night to discover her possessions climbing down the fire escape, one by one. The theme of existential queasiness, of wondering what we can rely on if not on the eternal persistence of a lovingly and minutely described souvenir fork “which I’ve had forever and ever,” is here most blatantly expressed. It’s a nice conceit, even if it doesn’t quite work. Galchen writes of these objects, as they progress toward their own new life, that they display “an enviable sense of purpose.” This is precisely what is missing, she is at pains to say here and more organically in her other tales, in contemporary life.

That life, as exhibited throughout American Innovations, is more and more occupied with concerns that are clearly displacements: real estate, money, caloric intake, the unsettled flux of young relationships, and pretensions of all sorts. Galchen’s characters are confounded by the interminable number of individual trees in an unseen forest. As one person (a professor of library sciences, naturally) tellingly inquires in the title story, “Are things well in the land of the young and innovative?” His interlocutor, a young woman who grows a highly symbolic extra body part that makes her an online sensation, barely flinches in the face of her ontological anxiety, but Galchen herself might be imagined to answer: Um, not exactly. One of her favorite words is “or.”

There is more exercise of vocabulary, too, always done with determined precision. When a five-dollar word is laid down, it is for a carefully considered purchase. The transactional nature of writing is made explicit in “The Lost Order,” in which a purposeless young woman briefly finds one when a takeout order is mistakenly phoned to her. One afternoon she had found herself

saying to the managing partner, “I’m afraid I’ll need to tender my resignation.” “I used that word, ‘tender.’ I could have rescinded all those words, of course.”

This sub-rosa slapstick with the notion of linguistic rigor is further amplified when, immediately afterward, the narrator’s husband is said to have put down his “handheld technology.”  Intentional awkwardness is a common technique by which the author stays at an ironic distance from her characters: “We’re not symbol people,” remarks one, which is a tipoff that in these stories every word and deed is meant to stand for something else.

Galchen has placed herself firmly in contemporary tradition, where structure strives for puzzle-box-within-a-Rubik’s-cube complexity, and a natural existential dread has given rise to a preoccupation with the fantastic, magical, and post-apocalyptic. (Current media fashion in zombies and vampires is no accident in a world of unexplained disappearances and general mistrust, where “news and data breed and the crowded channels grow ever noisier” with ever less to actually touch or hold.) Galchen’s unerring eye for the most absurd frivolities — the precise way a digital calorie-counting armband malfunctions; the fact that no urban flea market is complete without superfluous “well-packaged jam” — serves her, and thus her readers, very well indeed.

In a singular departure from the post-post-structuralist play that dominates most of the stories, there is the pure emotionality of “Wild Berry Blue,” an uncanny evocation of girlhood love, blossoming for the first (and, as it always seems, premature) time. It is so exact in its replication of every gesture, thought, and face-flushing sensation of being nine and possessed by something impossibly large — not to mention inappropriate, for the object of the child’s affection is an ex-junkie who works the counter at MacDonald’s — it is almost preternatural. The story is a detailed mechanical blueprint of first sexual awakening, a critical pivot on the plans of which is the moment a girl realizes “Roy alone is my whole world.”

The power in Galchen’s stories is of the tightly coiled variety: there is the sense that something could burst, could rise up out of the earth with a soul-crushing howl, and then we would be no more. A uneasy fear runs just under the surface of these fables with their mother-daughter squabbles, days-in-the-life of the well-educated upper-middle-class drifter, mentions of people with assumed identities who may “or” may not exist, all delivered matter-of-factly with the occasional fillip of arch deflation (“a sufficiently prestigious university” — meaning Wesleyan, not Yale?). In the middle of the title story, again, what passes most closely to a throwaway line in the oeuvre of a writer who has mastered the art of reducing her garbage footprint may well be the key to Galchen’s main enterprise. She’s just crafty enough to see if we’re awake to hear her prescient whisper. The narrator at one point offers that, “yes, people really could be people.” In the fabulations that comprise American Innovations — studiously innovative all — this refers to the slippery truth that things are both as they seem and that they never are. Only the old-fashioned and gullible do not distrust everything. You can trust Rivka Galchen on that.