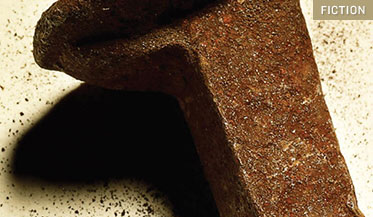 It is always interesting to see how a novelist tackles the long tradition of reinventing an iconic character. But in his ambitious debut, American Rust, Philipp Meyer not only carries the suggestion of a contemporary Huckleberry Finn to new dimensions, he pushes his narrative to further explore another familiar theme: what it means to be a working-class American man, trying to do the right thing despite being ravaged by economics and anger.

Meet Isaac English, a skinny, socially awkward 20-year-old who can see the answers to complex mathematical equations without the benefit of calculations. He’s also got a great pitching arm, but more on that later. Like Huck, he’s got an abusive father. While the elder English heaps praise on Isaac’s older sister, Lee, for her success at Yale, he’s verbally knocking Isaac down. Isaac in turn, refers to his father as “Little Hitler.”

Lee ruminates on the vagaries of such intellect. “She knew he would make a much larger contribution than she ever would — he cared only about things much bigger than his own life. Ideas, truths, the reasons things were. At Yale, her friends had accepted him immediately — Isaac was a personality type everyone was familiar with. But not here.”

It would be easy to peg Isaac as the archetypal nerd who doesn’t fit comfortably into the insular working class of the decaying steel town of Buell, Pennsylvania. However, he is, like the rest of Meyer’s characters, more complex and contradictory. Unlike Huck, Isaac made a conscious commitment to care for his old man, who has been confined to a wheelchair after an industrial fire. Trapped as a full-time nursemaid, Isaac turns over the course of events. “The three of them, Isaac, Lee, and his mother, had been like a family within the family. Then their mother had killed herself. Then Lee went off to Yale.” Overwhelmed by his inability to cope alone, Isaac attempted to drown himself in the Mon River just like his mother, but was saved by his friend, Billy Poe.

After that, he’s left to contemplate luck and fate — the larger forces at work in his life and those around him. “Except eventually the luck runs out — your sun turns into a red giant and the earth is burned whole. Giveth and taketh away. Of course by then he’d be long dead. But at least he’d have made his contribution. Being dead didn’t excuse your responsibility to the ones still alive. If there was anything he was sure of, it was that.”

But even luck and fate have their limits in Buell. Haunted by the ghost of an industry that took 150,000 jobs when it shipped out, punctuated by a dismantled mill standing “like some ancient ruin, its buildings grown over with bittersweet vine, devil’s tear thumb and tree of heaven,” it boasts nothing more than a downtown full of boarded-up, historic stone buildings and a remaining population passively waiting for something to happen.

Poe, once the star of their high school football team with a promising future, doesn’t apply to college. He gives in to the pervasive stagnation by losing menial jobs, drinking beer, and barely keeping up the wood fire to heat his trailer. His mother, Grace, is only 41 years old but sees herself in the mirror this way: “Hair had gone entirely gray. Even her eyes were going dull, burning down like old headlights.”

Among these malcontents, Isaac constructs an inner fortress of anger and resentment, swipes $4,000 of his father’s savings, shoulders a backpack (and a heavier burden — the contents of his active mind and struggling heart), and heads west. He’s got a shred of a plan to ride the trains to California and apply to an astrophysics program after establishing residence.

In spite of his prescient warning, “Wherever you go, you still wake up and see the same face in the mirror,” Poe comes along for the journey. They don’t get far before an encounter at an abandoned machine shop with a group of transients goes terribly awry. To defend Poe, Isaac uses his skillful aim and strikes one of the men directly in the skull with an industrial ball bearing, killing him instantly.

Now the two are even — each has saved the other’s life. They return to their homes with Isaac accepting this as just a delay of plans. Poe sinks under the weight of his own vulnerability. On the second attempt to escape, Isaac leaves Poe and a potential murder charge behind.

The story turns even darker as it navigates through a landscape of filthy trains and squatter camps populated with vagrant con artists. The constant fear for his money and his life fill Isaac’s days. Poe is arrested, having never once considered giving Isaac’s name to the authorities. The harsh flourescent lights of prison throw his defenselessness into high relief; a football swagger no longer relevant or able to protect him in this tribal society of convicted criminals.

For all of these gritty realities, Meyer’s work has already invited comparisons to Cormac McCarthy, whose finely crafted tales pit good against evil — with the latter the champion — in Outer Dark and Blood Meridian. But neither good nor evil is victorious in American Rust. Rather, Meyer chronicles a paradigm shift as Lee notes, “There was something particularly American about it — blaming yourself for bad luck — that resistance to seeing your life as affected by social forces, a tendency to blame larger problems on individual behavior. The ugly reverse of the American Dream.”

However ugly or bleak it may be, a small seed does grow and bloom organically in place of societal blight, cultivated by a chorus of voices that drive the feverish plot to its crescendo. This is perhaps Meyer’s greatest accomplishment with American Rust. In the tradition of Twain and other authors who write in the plainsong of the disenfranchised, Meyer’s narrative draws us fully in. By completely inhabiting his fictional world we can see hope as vividly, or vaguely, as the characters do themselves. It allows us to understand how rust and decay can give way to an optimism that, however fragile, keeps us going — even in spite of ourselves.