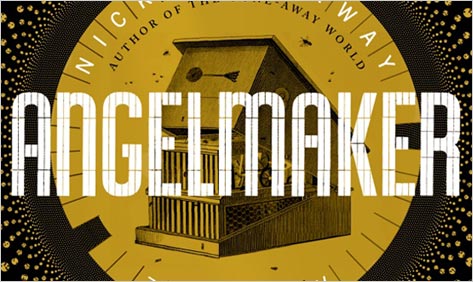 Let us first get the ultimately irrelevant, People magazine-worthy bit of trivia out of the way: Nick Harkaway is John le Carré’s son. This accident of birth has as much or as little to do with his writing abilities and career as you care to grant it. Upon due consideration, a sensible person will accord it small weight. True, in the acknowledgements in his first book, The Gone-Away World, Harkaway did say: “Over the years, I have received from my parents — by osmosis, as it were — a master class in writing and surviving the novel.” Likewise, the parallel section in his new book affirms: “I grew up in a house of stories, and some of those stories were tales of crooks and criminality. Some of them were of derring-do. All of them were amazing.” But if you fancy that his style or subject matter is derivative of his father’s, or that a subpar performance is being granted a nepotistic free pass, then a glance at his actual work will disabuse you of that fallacy faster than you can say “Joe Hill is not Stephen King.”

The Gone-Away World was a masterful debut, one far removed from le Carré’s patented sophisticated, Realpolitik thriller oeuvre. Surreal, absurd, speculatively outrageous, firmly embedded in the SF genre while also sharing affinities with the maximalist mainstream tradition of the 1960s (think John Barth and Robert Coover), the book abounded with wit, empathy, jollity, and satire. Its language was juicy and rich, in the manner of many a tall tale. It seemed the perfect polyamorous wedding of R. A. Lafferty, Fred Pohl, Donald Barthelme, and Ishmael Reed.

The novel opens some years after the Go-Away War has ruined our planet. The superweapons of this particular conflict are bombs that tear away at the roots of the real, destroying everything they touch and leaving a hungry vacuity that breeds monsters out of the imaginations of any hapless folk nearby. Only a narrow girdle surrounds the planet — protected by a pipeline that spews a chemical called FOX.  (And could that acronym for a regressive, reality-distorting fog bear any significance for our own times?)  Our nameless narrator is one of a hardy band of freelance roustabouts tasked with maintaining the pipeline.

But after this short and deft setup, Harkaway boldly embarks on a 300-page flashback that chronicles the narrator’s entire life history, a rich, colorful tapestry of education and vocation, love and rivalry, adventure and bureaucratic tedium that eventually ends in wild wartime exploits. Finally rejoining the “realtime” plot, the tale goes on to uncover the narrator’s surprising true existential nature, and to effect a paradigm shift that redeems the whole blasted world.

The world being depicted is not ours, but Harkaway’s intent is not to show an alternate history, a subcreation that has logically branched off from ours, in the manner of, say, Michael Chabon’s The Yiddish Policemen’s Union. Neither is he projecting an off-kilter future as Ryan Boudinot does in Blueprints of the Afterlife. Rather, he is following in a grand but less-populated tradition, the orthogonally removed parallel universe, in which various convergences and divergences from what we take for granted serve parodic or instructive purposes. Past examples of such lateral world building include John Barth’s Giles Goat-Boy, Robert Coover’s The Public Burning, and Ishmael Reed’s The Freelance Pallbearers. Harkaway succeeds to such an admirable extent that his book easily joins this illustrious catalogue.

His new book, Angelmaker, arriving a full four years after his debut, turns away from repeating such a maneuver, setting itself firmly in our consensus reality. But it fills our mundane globe with such a raft of hidden marvels and oddities that it transforms the known, miracle-devoid terrain into a marvelous and dangerous wonderland.

At the center of a large, entertaining cast of nonpareils and eccentrics, freaks and monsters, geniuses and idiots is one quite average, unassuming fellow (though he might very well be modestly hiding his considerable light under a bushel). This fellow is Joshua Joseph Spork. As his silly yet perfectly apt last name implies, he’s rather a boring, utilitarian soul, neither one thing nor another but a blend, a hybrid tool. (He’s even compared to a mere chisel at one point, in what is intended as a confidence-boosting gesture by a friend.)

Given that his dad was a famous, powerful crime lord, Joe Spork has one foot knowingly in the underworld. But his other relatives — including an influential grandfather — keep him on the straight-and-narrow. Joe has a talent for fixing intricate and delicate clockwork mechanisms, and that’s really all that intrigues him. He lives a bachelor life dedicated to his art, despite some longings for female companionship, and strives for serenity. But all is undone when he is tricked into repairing a broken Doomsday Device, which promptly undertakes a slow destruction of the world. While fleeing those who would imprison or enlist him, Joe attempts to redeem his unwitting actions and to save the planet from the Apprehension Engine and its truth-telling mechanical bees. (Don’t inquire too closely into that cruel mechanism, kissing cousin to the Go-Away bombs.) This quest will incidentally bring him the love of his life, Polly Cradle, that hoyden of wildly orgasmic “chemical-train sex.”

Along the way, the reader will also encounter, just to name a few, Edie Banister, elderly retired superspy, and her blind pug, Bastion. Edie’s lover, Françoise “Frankie” Fossoyeur, naïve mad scientist behind the Apprehension Engine. Polly’s brother Mercer, a lawyer who is to all other lawyers as Nijinsky is to Chaz Bono.  (The metaphor is mine, but I’m inspired by Harkaway’s over-the-top, addictively quotable prose: “By the look of things, they are the interface between the world which draws a pay cheque openly and the one which holds the key to the barn in Suffolk where they hide the corpses of people murdered by members of the royal family.”)  Shem Shem Tsien, the “Opium Khan,” Edie’s own Professor Moriarty.  Cecily Foalbury, proprietor of Harticle’s, that repository of all things queer and obsolescent. And the Ruskinites, a cult of masked devotees of  killer handicrafts.

These characters occupy a lively period from WWII to the present and frequent such outré venues as the criminal tunnel network underpinning London and known as Tosher’s Beat, and Addeh Sikkim, “a tiny tinpot nation on the edge of the British Raj.”

Now, as you might deduce from this précis, Harkaway’s book falls pretty squarely into the mode once unadmiringly dubbed “hysterical realism” by critic James Wood but also called, less disparagingly, “recherché postmodernism.” Pioneered by Thomas Pynchon and such unindicted co-conspirators as Tom Robbins, Edward Whittemore, Edward Abbey, and Richard Brautigan, such fiction forsakes naturalism for an amped-up gonzo filter on life. (And in fact Harkaway’s sympathies might have been ascertained from his christening of a main figure in World “Gonzo Lubitsch,” thus marrying Hunter Thompson’s bad attitude and stylistic bag of tricks to those of a screwball-comedy directorial genius.)

But while comparisons to Stephenson’s Cryptonomicon or Pynchon’s Against the Day might well be supportable and even pertinent, to my sensibilities Harkaway’s tone and affect are unlike those standard bearers. He deliberately eschews one task his peers readily assume: the gravitas of explaining the world and its systems. His books to date are more about sheer adventure, both ludicrous and poignant, microcosmic and macrocosmic. Recall his citation above, concerning the kinds of stories with which he was suckled: criminality and derring-do. In a figure such as the Opium Khan, we see pure pulp roots: Shem Shem Tsien is Fu Manchu and a dozen other Oriental Evil Geniuses. The Apprehension Engine, core MacGuffin, is echt steampunk (not a genre particularly known for favoring high-minded exegesis over sheer spectacle). Harkaway’s amiable goofball humor differs, I think, from Pynchon’s, which always has a desperate, strident edge about it. He’s more akin to P. G. Wodehouse or Van Reid, whose Moosepath League books seem spun of the same daft moonbeams as Angelmaker.

Dashing through the propulsive, hundred-page climax of this gloriously uninhibited romp of a novel, it dawned on me that I had just read the best episode of The Avengers never filmed. By this comparison, natch, I am not invoking the Marvel Comics superteam, but rather the quintessentially British spy ensemble of Emma Peel and John Steed — here embodied in Cradle and Spork. Harkaway has managed to recapture the lighthearted brio of an earlier age of precision entertainment, when the world was deemed to be perpetually teetering on the brink of Armageddon but always capable of being snatched back to safety with a quip, a wink, a judo chop, and the lurid highlights reflecting off Mrs. Peel’s leather catsuit.

Previous Previous Post: "Coney Island" Crimes
Next Post: Another Time, Another Life: The Story of a Crime Next