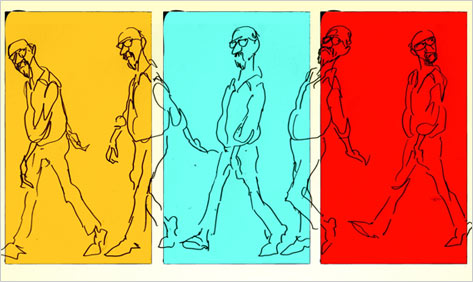 Jules Feiffer’s had a pretty remarkable career over the past 60 years or so. After becoming the pioneering cartoonist Will Eisner’s assistant as a teenager, he drew a long-running, ferocious comic strip for the Village Voice (initially called “Sick, Sick, Sick,” later just “Feiffer”), wrote a series of plays, novels and screenplays, and eventually settled into creating children’s books. This lively, digressive memoir details his evolution from skinny, put-upon Bronx Jewish kid to skinny, put-upon, world-renowned satirist, by way of stints on the open road and in the Army; it’s the equivalent of listening to a terrific raconteur’s well-polished anecdotes.

Like his characters, Feiffer’s got a superiority complex that keeps colliding with an inferiority complex, and a knack for turning neurotic self-examination into comedy: an agonizing stomachache he describes abruptly disappearing when he finally admits out loud that he hates his mother could have come straight out of one of his early cartoons. Even after he’s achieved fame, he seems hardly able to believe that he’s in the same circle as other bold-face names — there’s a hilarious bit about watching Marlene Dietrich and Kenneth Tynan discuss “Papa” Hemingway (“Apparently, I was the only one at the table who knew I was a fraud”).

After Backing Into Forward gets past the early-years-of-bitter-struggle part of Feiffer’s story, he’s got fewer stories to relate. The process of writing his 1967 play “Little Murders” at Yaddo is more or less the climax of the book; the subsequent forty years of his career are relegated to the book’s final fifty pages. But the fun part of Backing Into Forward is less the details of Feiffer’s work, and his brushes with other notables, than his keen-edged, blood-speckled wit, which he turns on himself as often as on the cruel world around him.

Previous Previous Post: He Crashed Me So I Crashed Him Back
Next Post: So Much for That Next