Banquet at Delmonico’s: Great Minds, the Gilded Age, and the Triumph of Evolution in America 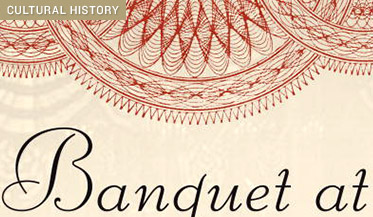 There is an amusing irony to the fact that social Darwinism — the theory that a society’s strongest members will flourish — was popularized by a bunch of nervous wrecks. Herbert Spencer, the prominent British philosopher who coined the phrase “survival of the fittest” in 1851, kept a diary faithfully detailing his many infirmities. (A typical entry: “Wretched night; no sleep at all; kept in room all day. Great fear I should collapse.”) Henry Ward Beecher, 19th-century America’s most famous minister, was a Spencer acolyte who helped reconcile Christianity with evolution; in the wake of a scandal in which he was accused of adultery, he told a friend he was ” on the sharp and ragged edge of anxiety, remorse, fear, despair.” Thomas Henry Huxley, the British physician who coined the term “agnosticism,” electrified audiences and gained instant fame on an 1876 lecture tour of America, during which he listed the young nation’s vast resources and then demanded, “The great issue…is what are you going to do with all these things?” Earlier, he had written his friend Charles Darwin, “I have for months been without energy and without hope and haunted by the constant presence of hypochondriacal apprehensions.”

While these were clearly not the fittest group of men themselves, Spencer and his adherents — who also included industrialist Andrew Carnegie, philosopher John Fiske, and political reformer Carl Schurz — revolutionized modern thought, as author Barry Werth demonstrates in Banquet at Delmonico’s: Great Minds, the Gilded Age, and the Triumph of Evolution in America. Werth’s richly absorbing history of social Darwinism focuses on 11 years of intellectual ferment, climaxing with the lavish 1882 New York banquet, held to honor Spencer at the conclusion of his three-month tour of the United States, that gathered many of the book’s major players.

Darwinism has come to stand in for a wide-ranging set of principles, but as Werth notes, Darwin himself “was a naturalist, not a philosopher.” He avoided commenting on the broader implications of evolution, a challenge taken up by others, Spencer most notably. Unlike Darwin, who saw evolution as morally neutral, Spencer equated evolutionary change with progress. His work found a particularly receptive audience in the United States, where many viewed America as evolution’s apotheosis, a view promoted by Fiske, who believed that the country’s “English race” was destined to export democracy and Christianity all over the world. He began one of his popular lectures by declaring, “The voyage of Columbus was in many respects the most important event in human history since the birth of Christ.”

The ascendance of Darwinism had earth-shattering ramifications for theology, and many of Werth’s group saw their task as making evolution acceptable to religious Christians. Louis Agassiz, the renowned Harvard naturalist who was Darwin’s most prominent critic, defined a species as ” ‘a thought of God’ — permanent, immutable, and designed specifically as part of a divine plan.” To some, Darwinism, by rejecting the argument of intelligent design, was an inherently atheistic philosophy (indeed, Darwin had himself become a nonbeliever, a development he quite understandably kept quiet). Asa Gray, a Harvard botanist who was a Darwin booster and Agassiz’s chief rival, argued that processes like adaptation and natural selection in fact implied intelligent design: “We know of old that God was so wise that he could make all things; but behold he is so much wiser than even that, that he can make all things make themselves.” Further aiding the cause was Beecher, who was growing increasingly distant from his clergyman father’s stern Calvinism. The immensely influential Beecher, whose clout was hardly diminished in the wake of his six-month adultery trial, identified as a “cordial Christian evolutionist.”

Evolutionary thought also seeped into political theory, although Werth points out that social Darwinism’s “extreme conservative, laissez-faire, antigovernment formulation would more accurately be labeled ‘Spencerism.’ ” Political economist William Graham Sumner, according to Werth, believed that “natural law dictated social inequality and no reform would abrogate that fact.” The Yale professor wrote that “a drunkard in the gutter is just where he ought to be.” Beecher was as pitiless as Sumner, preaching during the depression that consumed the last quarter of the 19th century that the poor must “reap the misfortunes of inferiority.” Carnegie, like the others, embraced competition and the concentration of wealth, but having once been a poor immigrant himself, he parted company with the Spencerites on the question of helping the needy, becoming one of the major philanthropists of his era.

The fascinating ideas traced in the book culminate in Werth’s you-are-there account of the titular banquet. Using contemporaneous records and other documents, he describes the event in sumptuous detail, from the guest list to the hours of toasts and speeches to the intriguing multicourse menu (“buttery scarlet kettle-drum-shaped pastry tufts stuffed with truffles, tongue, and pistachios,” anyone?).

The book’s promotional materials state that the repercussions of the issues debated at the banquet “still ripple throughout our society.” And indeed, today’s big-tent conservative movement includes both those who battle Darwinism, in the form of efforts to undermine the teaching of evolution in the public schools, and those who embrace social Darwinism, in the form of opposition to redistributive fiscal policies and regulation of markets. But the author doesn’t venture far beyond the 19th century, which may leave readers wishing that he had shared his own perspective on these repercussions.

But that is a quibble. Otherwise, Werth — whose previous books include The Scarlet Professor, a biography of 20th-century literary critic Newton Arvin — is a wise and engaging guide through the intellectual upheaval of the period. An elegant writer, he even manages to sneak in some dry humor here and there. Describing Spencer’s grueling voyage to America, he writes that the philosopher “imagined he could feel no worse, and expressed weary surprise when, entering the great harbor, he discovered that he could.” We are fortunate that Werth has rendered these thinkers so vividly, from their biggest ideas down to their smallest frailties.