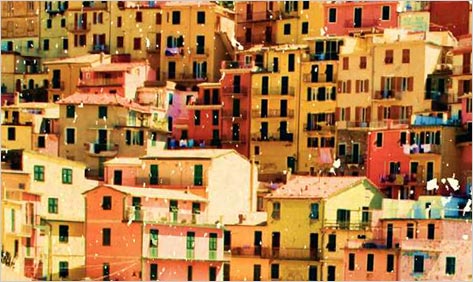 Jess Walter’s sixth novel combines black comedy and two love stories in such a devious, time-hopping way that coming to understand what’s going on in Beautiful Ruins brings the thrill of epiphany. This is partly a narrative ploy for creating mystery and suspense, and partly a reflection of what I take to be Walter’s view of the twentieth and twenty-first centuries, a world in which reality, so-called, is expertly manipulated by powerful interests. Walter conveyed this pervasive and insidious control most brilliantly and disturbingly in The Zero, and he does so again here, though with more of an eye to laughter than horror.

We begin — though of course it is not the beginning — in 1962, in a tiny, isolated Italian fishing village, a place so quiet that “only death was quieter.” Here Pasquale Tursi is trying, with  unwarranted optimism, to create a sandy beach and tennis court to attract tourists to his family’s little pensione, the unpresumptuously named Hotel Adequate View. To his and the village’s astonishment, a young and impossibly beautiful American woman arrives, ferried in on a boat. She is dying, she has been told, of cancer. Her story and Pasquale’s make up two of the book’s intermittently surfacing threads.

Meanwhile — though of course it’s not meanwhile but next up — twenty-eight-year-old Claire Silvers is in present-day Hollywood, steeling herself to dump a deadbeat boyfriend and to quit her job as assistant to producer Michael Deane. The latter, once a major figure in Hollywood, is now reduced to producing a “reality” show called Hookbook, twinned to a dating site called Hookbook.net in “a steaming pile of TV/Web synchronicity.” He is a shuffling, seventy-year-old man to whom the dark arts of cosmetic surgery have given “the face of a nine-year-old Filipino girl.” A miracle of crassness and opportunism, he brings perfect joy to the reader every time he appears.

While Claire gets on with thinking about her future, Shane Wheeler, a veteran loser, is preparing to fly from Beaverton, Oregon, to Hollywood to pitch his screenplay to Claire, hoping Deane will produce it. It concerns a member of the Donner Party and his efforts to save his family; a synopsis of it makes up part of the novel, thus hurling us back to 1846.

Also cropping up now and again is Alvis Bender, a writer who visits the Hotel Adequate View every year to work on his novel about his experiences in the Second World War. Over the years, he has come up with only one chapter, but it too makes it into this book. And then there is Pat, a disappointed singer-songwriter and boozer. He gets us to London and Edinburgh. Finally — though not last — there’s Richard Burton, bottle in hand, fresh off the set of Cleopatra, which is being filmed, disastrously, in Rome.

It was Deane, we learn from an (until now) unpublished chapter in his memoir, who saved the fast-sinking production of Cleopatra from going completely under in 1962. The previous two years had brought calamity of every description, and the picture was becoming more of a dud. Now it was hit by what would seem to be the fatal blow: the searing-hot, on-location love affair/brawl of Richard Burton and Elizabeth Taylor. She is the woman, after all, who had stolen Eddie Fisher from America’s sweetheart, Debbie Reynolds. Now Liz has dumped the soppy crooner for the notorious Welsh actor, philanderer, and rum pot. The affair, with its tantrums and exhibitions of lust, was, writes Deane in his memoir, “a car wreck. A ten-car pileup.” It was becoming impossible to keep the presumably disapproving public from learning about it. Deane, hired as a fixer, comes up with the solution and discovers his genius: “I saw the whole world in a flash and I recognized it at once,” he reports:

It is impossible to say much about the plot without ruining its surprises or revealing Deane’s acts of inspired deception and treachery. But I can say that Walter’s sardonic wit and mischievous intelligence shine out to the very end. It is gloriously and darkly funny that this menagerie of characters and disparate elements come together as a story because of the machinations of that “lacquered elf,” Michael Deane. Brazen master of spin, he is a genius for whom pandering to debased appetites is a form of largess, for whom lies and perfidy are creative acts. He is the demiurge of this story and of our time.