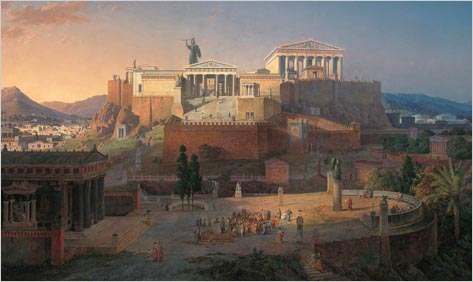 The title of Brent Nongbri’s sharp and learned new book, Before Religion: A History of a Modern Concept, sounds like a paradox. Isn’t religion one of those basic features of human culture, like language, that have always existed? Ancient Greeks had their temples to Athena; before them, the Babylonians had Anu and Marduk; before them, the ancient Egyptians worshipped Ra and Osiris. In the same way, religion seems to exist everyplace on the globe, one phenomenon in many different forms. According to what Nongbri calls our conventional, “World Religions” model of thinking, the globe is like a map divided neatly into sections where different religions predominate: Islam here, Hinduism there. Wherever we turn, religion seems already there to meet us.

Nongbri’s argument is that we see religion everywhere because religion is what we expect to see. The universality of religion is an illusion, caused by our way of thinking and talking about what are, in reality, vastly different spiritual mind-sets and practices. “Because of the pervasive use of the word ‘religion’ in the cultures of the modern Western world, we already intuitively know what ‘religion’ is before we even try to define it,” he writes. Specifically, “religion is anything that sufficiently resembles modern Protestant Christianity.” Scholars and historians operating in the Western tradition unconsciously take that tradition — with its emphasis on inward spiritual experience and a canon of sacred texts — as a paradigm.

Before Religion hopscotches across centuries and continents, giving case studies of the ways very different spiritual traditions have been shoehorned into the Protestant model. Before the Renaissance, Nongbri shows, Europeans had no concept of the world as divided among different, equivalent religions. Early Christians trying to make sense of Islam categorized it, instead, as a Christian heresy; they could not imagine a rival to Christianity, only a deformation of it. Likewise, ancient Greek and Roman gods were not thought of as comprising a religious system. They were held to be devils and demons, which maliciously led people astray from the worship of the one true God.

This kind of parochialism was shattered, Nongbri writes, by the Reformation, which led to internal divisions within Christianity, and by the Age of Exploration, which brought Christians face to face with radically different conceptions of God. At first, Europeans in South America continued to think of native deities as Christian devils. When Pizarro despoiled the temple of the Incan god Pachacamac, according to a sixteenth-century chronicler, “the Christians explained to the Indians the great error in which they had been enveloped, and that he who was talking in that idol was the devil.” Only gradually did Europeans come to conceive of non-Christian beliefs, including those of ancient Greece, as comprising religions with an integrity of their own.

Once this happened, however, the pressure was great to assign every culture a “religion,” even when this meant distorting actual religious practice. Shintoism, for instance, was more or less invented by the Meiji emperors at the time of Japan’s opening to the West, as a way of giving Japan a suitable national religion. It was, Nongbri writes, “a clear example of the creation of a religion specifically to fit the model of World Religions.” Likewise, the spiritual tradition of India was not known as “Hinduism” until the late eighteenth century, and for a long time after that the word “Hindu” could refer to either religion or ethnicity.

In the end, Nongbri argues that while it may be impossible to avoid projecting our own assumptions about religion onto foreign cultures and ages, we should do so self-consciously rather than blindly. “If we want to go on talking about ancient Mesopotamian religion, ancient Greek religion, or any other ancient religion, we should always bear in mind that we are talking about something modern when we do so. We are not naming something any ancient person would recognize,” he writes. In addition to being an absorbing historical polemic, Before Religion is a fine example of the kind of curiosity and skepticism it advocates.

London in the eighteenth century was the greatest city in Europe, where extremes of sophistication and squalor could be found side by side. In A Great and Monstrous Thing — the title comes from Daniel Defoe’s description of the capital — Jerry White offers a compendious history of London in this period, covering every level of society from courtiers to thieves.

Despite his campaign promise to close the detention center at Guantánamo Bay, President Obama’s administration continues to prosecute suspected terrorists held there, outside the usual process of American law. In The Terror Courts: Rough Justice at Guantánamo Bay, Jess Bravin shows in detail how the prosecution of Guantánamo inmates has conflicted with the American justice system.

In One Woman in a Hundred: Edna Phillips and the Philadelphia Orchestra, Mary Sue Welsh writes the biography of Phillips, a once-celebrated harpist, whose career in mid-twentieth-century American music introduced her to everyone from Stokowski to Walt Disney.