Behind the Wire: Inside Guantánamo

Two new books on Guantánamo condemn the notorious detention facility from opposite sides of the barbed wire. Guantánamo Diary is an astonishing memoir by detainee Mohamedou Ould Slahi, describing his Kafkaesque experience as collateral damage in America’s endless war on terror. Murder at Camp Delta is Joseph Hickman’s unnerving account of his National Guard service at Gitmo and his belief that three detainees whose June 2006 deaths were ruled suicides were in fact killed during torture sessions that went too far. Both books provide further evidence for the view that America’s  commitment to due process has been gravely compromised in the name of post-9/11 security.

Hickman lays out his charges in an absorbing first-person narrative that covers his arrival at Gitmo, the events of June 9, 2006, and his subsequent attempts to determine whether Ali Abdullah Ahmed, Mani al-Utaybi, and Yasser al-Zahrani had indeed killed themselves, as the official investigation concluded. Hickman was on duty the night of the deaths, and he immediately questioned the suicide narrative. For one thing, he had seen three detainees removed from their cell blocks during the night and driven outside of their camp in an unmarked van; he observed the van driving toward what has since been revealed as a secret CIA “black site” interrogation facility. He methodically demonstrates the implausibility of the government’s claim that the detainees died in their cells. All three were hunger strikers and thus subject to increased surveillance; for them to have hoarded enough material with which to fashion nooses and to have been unobserved hanging themselves in their cells would have required incredible dereliction of duty on the part of the guards tasked with monitoring them, yet no guards were ever reprimanded. 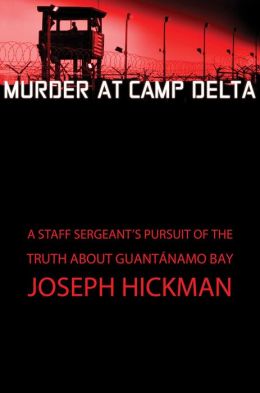 Hickman — who took his concerns to the Department of Justice’s inspector general before going public — makes a convincing case, but a quick Internet search turns up a number of journalists who have expressed reservations about the homicide theory. (Hickman previously told his story to Scott Horton for Harper’s; Horton’s 2010 article won a National Magazine Award for Reporting. In addition, Hickman enlisted the help of Mark Denbeaux, who heads the Seton Hall University School of Law’s Center for Policy and Research. (The center researched the charges independently and issued its own damning report.) Unless the government reopens the investigation, the truth may never be known.

Still, whether you accept Hickman’s theory about the deaths — or his broader claim that Guantánamo functions as a battle laboratory to test out torture techniques — Murder at Camp Delta certainly gives fuel to the widespread view that American operations at Gitmo run counter to the nation’s ideals. The author, who spent most of his adult life in the military and who opens his book by declaring, “I am a patriotic American,” had concerns about his mission long before the detainees’ deaths. He says that during their thirty-day training, he and his men were told next to nothing about the prisoners they would be guarding, with the primary message being that “the detainees all wanted to kill us.” Upon arrival in Cuba, he was incredulous that the most serious briefing concerned the protected status of the Cuban rock iguana. (“Men, the use of deadly force on a detainee can be justified given the right circumstances,” an officer told the Guardsmen. “There is absolutely no justification for harming an iguana.”) When Hickman first walked the cell block, he was shocked at the unruly environment, which included navy guards and prisoners screaming obscenities at each other and detainees hurling urine and feces at the guards, scenes he describes as “complete chaos” and “bedlam.” Hickman at first assumed that the detainees’ hatred of the Americans running Guantánamo was an expression of their radical Islamic beliefs, but over time he came to see it as a response to the facility’s inhumane conditions.

Mohamedou Ould Slahi’s Guantánamo Diary is an important, vivid, and moving account of those conditions. Slahi wrote his manuscript in English, his fourth language, by hand in 2005. His lawyers have worked since then to secure its publication, and it appears now, edited by human rights activist Larry Siems, with more than 2,500 government redactions in place. (Some redactions, such as the names of interrogators, are understandable, while others are ridiculous: when a friendly guard reassures Slahi that he’ll be sent home, Slahi begins to cry, and the word “tears” is inexplicably censored. In other cases the work is simply sloppy, with a name being consistently blacked out but then suddenly appearing unredacted.) 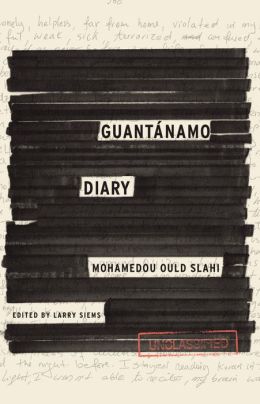 Slahi is a native of Mauritania who, as a young man, won a scholarship to study electrical engineering in Germany. During the early 1990s, he interrupted his studies to receive training from al-Qaeda, at a time when the group shared a common cause with the United States, fighting the communist government in Afghanistan. He returned to Germany and later lived briefly in Montreal, praying at the same mosque as the man behind the failed Millennium Plot to bomb Los Angeles Airport on January 1, 2000. Slahi returned to Mauritania in 2000; en route, and again after 9/11, he was questioned by the FBI about the Millennium Plot and released. In November 2001, Mauritanian police arrived at Slahi’s home and asked him to come to the police station for further questioning. He was told to take his car, so he could drive himself back home, but he never returned. After a week in a Mauritanian jail, Slahi was flown on a CIA rendition plane to a Jordanian prison, where he was interrogated for seven and a half months. He was then flown to the U.S. military’s Bagram Air Base in Afghanistan for two weeks of interrogation. In August 2002 he arrived at Guantánamo, where he remains to this day, despite the fact that a federal judge ordered his release in 2010. He has never been charged with a crime.

Slahi was asked the same questions by different teams of interrogators over and over for years, a period that included months of torture in 2003 in a plan personally approved by Donald Rumsfeld. During that period, Slahi was interrogated in shifts for twenty-four hours a day; beaten; sexually assaulted by female interrogators; force-fed during fasting times at Ramadan; forbidden from praying, showering, and seeing representatives of the Red Cross; subjected to extreme temperatures; and told his mother had been detained. (Slahi’s claims are corroborated by government investigations that Siems quotes in the footnotes.) These sections are harrowing, but it’s the diary’s unexpected details that dramatize his isolation. After he began confessing to crimes he hadn’t committed in order to stop his torture, he was rewarded with comfort items. When he received a pillow, he was happy because after being without his Koran and other books for so long, he could at least read and re-read the pillow’s tag.

Slahi writes with intelligence, empathy, and wit. He is generous toward his tormentors, figuring that “many people in the Army come from poor families, and that’s why the Army sometimes gives them the dirtiest job.” There are flashes of anger — how could there not be? — but more often he comes across as exceedingly reasonable. “I’m not a lawyer,” he writes, “but common sense dictates that after three years of interrogating me and depriving me of my liberty, the government at least owes me an explanation why it’s doing so.”

Towards the end, Slahi’s false confessions have earned him privileges including books and video games. When a trio of guards ending their assignments at Gitmo gift him with a Steve Martin novel, the warmth of their inscriptions is not surprising. “We have become friends,” writes one. “I am sure I will think of you often.” “It is almost impossible not to like a character like yourself,” writes another. Readers might find themselves agreeing, although those feelings will likely mingle with shame while Slahi remains detained at Guantánamo.