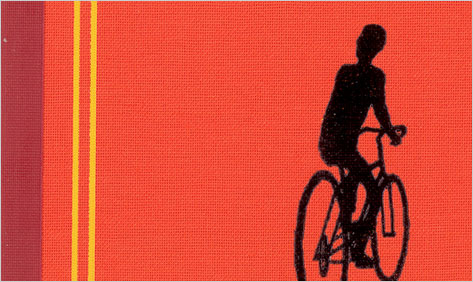 When David Byrne stops moving, does he fall over? And when stationary, is he liable to be found leaning carefully against a wall? Conversely, does his bicycle make unannounced domestic appearances — by the fireside, perhaps, on a rainy day, or near the kitchen table when food is laid out? Fans of the great Flann O’Brien will know where I’m going with this: If Byrne, as recorded in Bicycle Diaries, has truly explored the world’s great cities en vélo, then according to the theory of “atomic interchange” propounded in O’Brien’s The Third Policeman he must by now be part bicycle, and his bicycle part Byrne.

Let us examine the case. Bicycle Diaries takes the form of a light travelogue or pedalodyssey, with Byrne — ex-frontman of Talking Heads, current artistic all-rounder — gliding on his fold-up two-wheeler through Istanbul or Berlin or Sydney, popping into galleries, playing music, talking to interesting people, thinking thoughts, reading books, and then recording his impressions as to the essential nature of the place and its degree of bicycleability (these last two quantities being not unrelated.) So with The Third Policeman in mind, we must ask: After all this international pedaling about, and so much hard atomic contact between rider and seat, exactly what percentage of David Byrne is still David Byrne? His prose style, certainly, would seem to suggest a preponderance of bicycle-atoms. “Most often when listening and not dancing,” he writes in the “London” chapter of Bicycle Diaries, “I choose music with singing as I find that the arc of a melody, combined with harmonies and a rhythmic pulse, can be incredibly emotionally involving. We call these songs.” Yes, I suppose we do. Elsewhere Byrne tellingly refers to humans as “poor little meat puppets” and offers the speculation that “while religions might indeed be a lot of superstition as well as being an unfortunate excuse for violence and countless horrors they might also serve a purpose.” Pure bicycle-speak.

But this is disrespectful, isn’t it. Byrne is a musical visionary, a great lyricist too, and as far as I’m concerned he can write whatever the hell kind of book he wants to write. Besides, the functional and mildly alienated tone of his prose actually works rather well in this context: his is a bicycling mind, with a point of view — as he explains in the Introduction — “faster than a walk, slower than a train, often slightly higher than a person.” And if, in this light swoon of two wheels whirring, some of the things that occur to him are a little banal, well, others are quite interesting. In Buenos Aires, for example, pondering the strange absence of bicycles from a city so temperate, flat, and cleanly laid out, he concludes that the answer is simply “cultural abhorrence”: “The cycling meme hasn’t been dropped into the mix here, or it never took hold,” he muses, before pedalling off into an excursus on the theories of Jared Diamond.

Also: The world is fascinating. Byrne in Bicycle Diaries is the complete postmodern tourist, open to everything, concepts at his fingertips, keenly — but not too keenly — interested in a certain hovering, numinous sensation that he gets around shrines and places of worship, and so he makes a very good guide. In the recession-bitten town of Millvale, Pennsylvania, just outside Pittsburgh, he finds a Croatian church containing tempera wall paintings by the midcentury artist Maxo Vanka. The imagery is explosive: factories belch infernal smoke; angels weep as a top-hatted industrialist peruses the stock quotes; the Virgin, her face a stark grimace of compassion, separates two struggling soldiers, while Jesus takes a bayonet to the side. Smutty with Allegheny Valley coal dust, the murals knock Byrne out: he dubs Vanka “the Diego Rivera of Pittsburgh.”

Byrne also spends some time in Manila, where in contrast to Vanka’s devotion he finds the relics of secular idolatry — gauzy, soft-core homages to Ferdinand and Imelda Marcos, painted dreamscapes designed to propel the blighted First Couple into the realm of national mythology. Not that we ourselves are immune to such things, Byrne is quick to note: “The desire to find a slot for oneself in the collective national psyche runs deep. George Bush and Ronald Reagan were often photographed wearing Western clothes despite one being a New England WASP and the other a Hollywood movie star.”

So much for neutral observer Byrne: there’s also plugged-in Byrne, international art scene Byrne, whose connections in each city tend to be deep in that city’s culture sector. (“My friend C and I have lunch with two youngish guys who run an art gallery here…”) And then, of course, there’s bicycling Byrne, threading his way with spindly, helmeted heroism past every bus-shaped Scylla and whirling Charybdis-like junction that the modern city can throw at him. Biking à la Byrne means ecology, geekiness, a way of piercing into the world: skateboarding for the cerebral, if you like. The bicycle, fundamentally, is a machine in two dimensions — which is why we appreciate so heartily the sight of a fat man on a bicycle. Byrne is not fat: he is tall and pointy and possessed of a certain angelic remoteness. But he loves to ride, and look at things, and he thinks, moreover, that the hour of the bicycle may be upon us. He applauds the bike racks sensibly installed on San Francisco’s Muni buses; “New Yorkers,” he ventures, “are at the point where they might, given the chance and opportunity, consider a bicycle as a valid means of transportation.” He is very interested in a new prototype helmet that can be slipped inside various “skins”: “a warm woolen skin with earflaps for cold winters, a porous mesh skin for hot summer.” He feels the cold, and he feels the heat, and he thinks about his fellow beings. More man than bicycle after all.