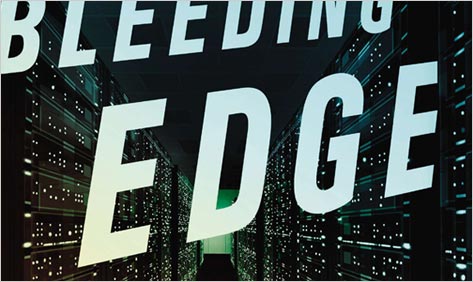 In 1973, in the cult film Soylent Green — a science fiction thriller in which global warming has thrown the earth’s ecosystem disastrously off balance, panic pervades society, and New York streets teem with the poor and dispossessed — humans choose the moment when they wish to die, which they call “going home.” The process for making this final exit is lullingly benign — and, at the present cultural moment, hauntingly familiar. The departed-to-be willingly enters a surround-sound video chamber and, while slipping into drugged oblivion, drinks in an ecstatic screenscape of color-saturated vistas whose theme he has himself pre-selected, accompanied by a soundtrack of his favorite sort of music (picture the iconic ’80s Maxell TV ad, but with the enraptured armchair listener etherized upon a table).

In Thomas Pynchon’s showstopping new novel (his ninth), Bleeding Edge, this visual means of escape has been made everyday by the technological progress of the last forty years: what once was virtual death now has become a virtual reality.  His setting is New York City in 2001 — a place that will soon endure a catastrophe that will feel like science fiction but isn’t: the 9/11 attacks. In his futuristic (recent) present, at a time when New Yorkers are still recovering from the bursting of the dot-com bubble, anyone who has access to a computer screen and knows where to look can find refuge from the post-tech-boom doldrums in a parallel digital universe called “DeepArcher” (get it?), and secede from “meatspace” reality…with or without doing what we once thought of as dying. During one foray into this enveloping cyber universe, Pynchon’s protagonist, a vigilante fraud inspector and separated Upper West Side mom named Maxine (Maxi) Tarnow, thinks of her young sons, Ziggy and Otis, who gleefully obliterate targets in violent video games at every opportunity. As she roves a pixellated online desert, interacting with avatars of her friends and foes (who may or may not be who they claim they are, if in fact they are alive at all), she asks herself how DeepArcher differs from her children’s play. “Does anybody get extra lives,” she wonders. “Does anybody even get this one?”

In New York in 2001, the line between imagined life and actual existence has dissolved to such an extent that Maxi cannot be sure. As she stalks her online labyrinth hunting for proof of the dubious dealings of a computer security firm called hashslingerz, which seems to have ties with Mossad, the Russian mob, CIA spooks, and Middle East terrorists, she senses DeepArcher’s awesome synthesizing power. “Latent, maybe it’s geometric,” she reasons, this app may have the capacity to resurrect the pre-9/11 world and its inhabitants: “a sacred city all in pixels waiting to be reassembled, as if disasters could be run in reverse, the towers rise out of black ruin, the bits and pieces and lives, no matter how finely vaporized, become whole again.” There’s only one flaw to Maxi’s consoling scenario: any hacker who can crack the DeepArcher code can warp the storyline to suit his own purposes — which may be as venal as guiding users to shop and gamble, or may be far more sinister. And unlike her sons, Maxi is not in control of the joystick. “We’re being played,” her techie friend Eric warns her. “The game is fixed, and it won’t end till the Internet’s destroyed.” But how do you destroy something that does not in the physical sense exist; which is, nonetheless, ubiquitous; and whose participants urgently wish for it to continue? Pynchon has converted age-old dilemmas of life and death into encrypted mysteries of the “Deep Web,” which operate without a master programmer, on- or offscreen. What is coded, what is uncoded; and by extension, what is intentional and what is random, anymore? Maxi calls this vertiginous blur “virtuality creep.” Anyone who reads this book can look out the window — or into a computer screen — and instantly know what she’s talking about.

Ever since he began writing fiction, Pynchon has eerily anticipated the state of polytropic whir and leap-frogging associations that marks today’s status quo.  Half a century ago, in 1963, when he published his brilliant, convoluted, boisterous first novel, V. (it won the Faulkner Prize), the twenty-six-year-old novelist electrified and mystified the reading public. His language and vision were decades ahead of his time; and his fervid, farcical, gymnastic imagination beguiled the kind of readers who were susceptible to what Yeats called “the fascination of what’s difficult” — and infuriated everyone else. Ten years later, his macabre, despairing, erotic, and wickedly funny masterpiece, Gravity’s Rainbow (it came out the same year as Soylent Green) clinched his reputation, but inflamed Pollyannaish critics who were so horrified by the book’s louche preoccupations — sex, Hitler Jugend, and phallic projectiles — that they missed the author’s visionary philosophy and even questioned his  sanity.

But even at their most willfully abstruse, Pynchon’s fictions have always seethed with metaphysical purpose. In  V. (his last novel before Bleeding Edge to make New York City its main setting ) he wrote that life has only a “single lesson: that there is more accident to it than a man can admit to in a lifetime and stay sane.” He tacitly dedicated Gravity’s Rainbow, via epigraph, to Dr. Wernher von Braun — the German scientist who invented the V-2 rocket, which played a damnable role in the Second World War and a starring role in the novel. “Nature does not know extinction; all it knows is transformation,” Pynchon quoted. Science, von Braun’s aperçu continued, “strengthens my belief in the continuity of our spiritual existence after death.” A decade after Bleeding Edge‘s 2001 timestamp, the twin forces of history and technology have allowed Pynchon to look back, rather than forward, to unite these two epiphanies without any need for a great logical leap from the reader. His message is delivered against a cyber-inflected contemporary backdrop that even a decade ago might have seemed like comic-book fantasy, but now is simple documentary. He does not presume to answer the existential questions he raises: like Maxi’s nonjudgmental filmmaker friend Reg Despard, who has intuited the coming YouTube era, he records everything his lens takes in, knowing that millions will soon throw their own footage on the web for all to see, and to analyze the images as they see fit. “Everybody’ll be shootin everything, way too much to look at,” Reg tells Maxi. “Think of me as the prophet of that.” It is Pynchon, of course, who was and is the prophet of that; and whose eyes were and are his camera.

As the story begins, in the spring of 2001, Maxi Tarnow innocently walks her kids to their artsy-fartsy Upper West Side private school, admiring the blossoming Callery pear trees, planning, perhaps, a grocery run to Fairway or Zabar’s. In those comparatively halcyon days, the biggest problem faced by Maxi and her friends — members of the “nerdistocracy” — was the slipping of their fortunes as Silicon Alley’s fortunes rolled into the gutter. At a nostalgic revel on September 8th , thrown to celebrate hashslingerz’s newest acquisition, Maxi and her cronies dance on a wave of “nineties irony, a little past its sell-by date,” as they recall their recently retreated security:  “the day jobs with meetings about meetings and bosses without clue, the unreal strings of zeros, the business models changing one minute to the next, the start-up parties every night of the week…” Three days later everything will change, as the sanity-challenging “accident” of 9/11 will at last snap them out of complacency and awaken them to the precariousness of their fates. Meanwhile, the ongoing Internet beta-test of Wernher von Braun’s dream of life after death (of a kind) will acquire new urgency. Pynchon couches these perceptions in a rollicking, zesty, easy-to-follow story that’s as warm and recognizable as any Upper West Side brownstone block —  even if his heroine packs a Beretta and pole dances as she tracks the dastardly doings of Gabriel Ice, the villainous “entreprenerd” who heads hashslingerz.

Literary trends and popular speech have caught up with Pynchon between the publication of  V. and Bleeding Edge; such that his style no longer confounds the nimbler reader, while his language, even at its saltiest, no longer outrages anyone who’s ever skimmed a blog. Today’s readers, accustomed to web surfing and channel hopping, are more used to thinking associatively than they were in the ’60s and ’70s; while many other authors  — Jonathan Lethem, Don DeLillo, and Richard Price, to name three — have deepened and widened the dystopic, cinematic path that Pynchon was the first to break. The future that he so precociously, disturbingly foresaw long ago now surges around us. With Bleeding Edge, he shows that he has mastered the move from the shock of the new to the shock of the now, while cushioning the blow. If Maxi, in the post-9/11 world, keeps finding it “harder to tell ‘real’ NYC from translations” and “keeps getting caught in a vortex taking her farther each time into the virtual world,” she is not alone. Pynchon throws her, and us, a rope. Where, we wonder, can it go?

Liesl Schillinger is a New York-based writer and translator. She is the translator of The Lady of the Camellias, by Alexandre Dumas Fils, and the author of an illustrated book of neologisms, Wordbirds.