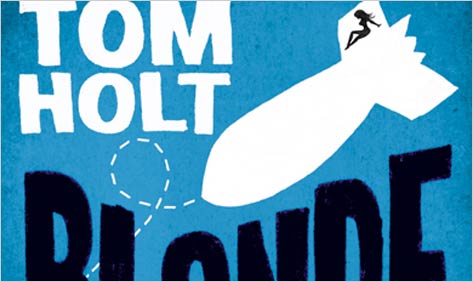 Tom Holt—popular British author of dozens of novels, yet suffering from an undeservedly low profile in the USA—owns a generous supply of all the talents needed to produce superb comedic fiction:

A capacious word-hoard full of strikingly outrageous metaphors and similes. (“For her, it was more like falling out of a window with a burst appendix and really bad toothache:  there were three distinct ingredients, all urgent, all unsettling, all clamoring for her attention at the same time.”)

A keen sense of the absurd.

A musician’s sense of timing.

A dogged willingness to wring every last ounce of humor out of a conceit.

An ability to craft lovable, nebbishy Everymen and wicked, outsized villains, each exhibiting a full blend of vices and virtues.

A shameless enthusiasm for low pratfalls and puns.

A sophisticated command of arcane tidbits of fascinating information.

And when you factor in his admirable insider’s grasp of science fiction and fantasy tropes, and a capacity to produce some genuine speculative insights, you get a fellow who can write rings around a mere Douglas Adams. In fact, one might measure his power in magnitudes of Sheckleys or Tenns.

The highly advanced planet of Ostar is populated by genius canines, a race of doggie Stephen Frys. They have lately taken a dislike to Earth—or Dirt, as they translate our name—due to our annoying music broadcasts having finally reached across the lightyears to bewilder and bedevil them. They immediately dispatch one planet-busting missile to deal with us, but it vanishes from contact. Baffled, they launch a second, more cautiously. The intelligent bomb in orbit around Dirt sends down a manufactured spy in a human shell, who chooses the sly undercover name of Mark Twain. Twain’s investigations eventually lead him to Lucy Pavlov, the world’s smartest and richest woman, a female uber-Bill Gates. Figuring into the resulting machinations to stave off destruction of the planet are two rival Ostar spies, and George Stetchkin, alcoholic corporate lackey transmogrified into “a being of pure text” by the aliens.

Full of ingenious twists and reversals, this extremely silly story subverts its own farce with a clever examination of what being human means, and how different and opposed cultures might get along. Important and highly topical themes, whether you walk on two legs or four.