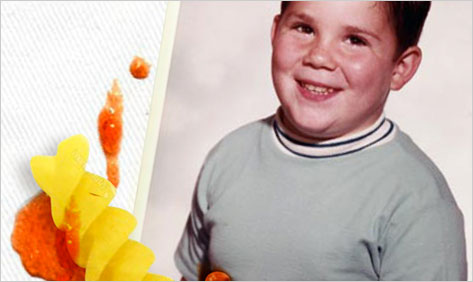 There are two kinds of people in the world. Not cat and dog people, not chocolate and vanilla. There are, I’d propose, people who will read Frank Bruni’s autobiography — in particular, the scene where he’s scarfing precooked Tyson chicken breasts, one-handed, in his car, while driving home from the grocery store and think, oh, ew…and then there are people, my people, who will read it and think, well, duh. That stuff smells good! And when you’re hungry, you’re hungry!

My people know what it’s like to watch a sibling push a half-full plate away and wonder, How do they do that? Don’t they see there’s more?. We’re the ones who’ve been on every diet, endured every form of exercise, and can tell you, at a glance, the calorie count and/or Weight Watchers point value of every morsel you could put in your mouth.

Bruni, the departing food critic for The New York Times, is one of us. He was born with an obdurate, ineluctable appetite, a voice inside that eternally cried, More, more, more and never once whispered, Enough.

The good news first: His memoir Born Round: The Secret History of a Full-Time Eater pulls off the impressive feat of being both mouthwatering and heartbreaking. There are drool-worthy descriptions of the meals young Frank enjoyed: his mother’s lasagna, his grandmother’s frits: balls of fried dough with mozzarella and tomato sauce at their center, “like miniature thick-crust pizzas turned inside out, or rather outside in, only better, so much better, than any pizza could be.”

And, of course, there are the consequences: the love handles that Bruni disguised with a “shapeless, floppy, pale green Army-issue Winderbreaker,” the author photo that he had digitally stretched to suggest slimness, the desperate measures, from a flirtation with bulimia to a stint on Mexican speed, that Bruni employed to keep the excess pounds away; the boys he wouldn’t date or wouldn’t sleep with because he didn’t want to be seen shirtless.

It says a lot about the shame of being fat in America that, for Bruni, coming out of the closet proves less painful than hanging pants with a 40-inch waist inside of it. It’s revealing, too, to see the author lavish more description on the meals — as opposed to the men — that he’s loved. Bruni shucks partners like peel-and-eat shrimp shells while making his way ever upward, on the scale and toward the Times. . . but maybe that’s not surprising. Boyfriends come and go; Ben & Jerry’s is forever. And, as Bruni admits, his “life-defining relationship, after all, wasn’t with a parent, a sibling, a teacher, a mate. It was with my stomach.” (Mom places a distant second).

The book’s final section finds Bruni relatively happy, having mastered, mostly, the art of portion control and vigorous exercise. It offers a procedural on weight management if your job involves eating most of your meals at the best restaurants in the world (taste, don’t finish), details about the mechanics of being a critic (fake names always, costumes on occasion), and the frisson of a few bold-faced names (who knew Sarah Jessica Parker had such problems with parsley?)

My only problem with Born Round isn’t Bruni’s fault, but it’s worth mentioning that his book will get more than its fair portion of attention.

Part of this has to do with Bruni’s job, more of it, with his gender. A woman with a painful relationship with food and her own body is a classic dog-bites-man story, where a guy willing to lament his jiggly chest and widening waistline, or describe how he cried in a country-club basement after his brother called him fat, is a little more man bites dog.

There is also the double standard that still applies to memoirs. Where a man is deemed brave for revealing his flaws and insecurities, a woman telling similar stories can depend on being called whiny, neurotic or just plain nuts.

Instead of serving Born Round as a one-dish supper, I’d put Bruni’s book on the buffet with Valerie Frankel’s Thin Is the New Happy, Betsy Lerner’s Food and Loathing: A Lament and Judith Moore’s excoriating Fat Girl: A True Story. There are plenty of painful, funny, revealing books about appetite and its consequences out there, books that shouldn’t be ignored simply because their authors were born round — and born female.

Jennifer Weiner is the author of the bestselling novels Good in Bed, In Her Shoes, Goodnight Nobody, Certain Girls and (most recently) Best Friends Forever.  She contributes to numerous magazines, and blogs at  jenniferweiner.blogspot.com.

Jennifer Weiner is the author of the bestselling novels Good in Bed, In Her Shoes, Goodnight Nobody, Certain Girls and (most recently) Best Friends Forever. She contributes to numerous magazines, and blogs at http://jenniferweiner.blogspot.com.

Previous Previous Post: "A land more kind than home"
Next Post: The Complete Stories of J.G. Ballard Next