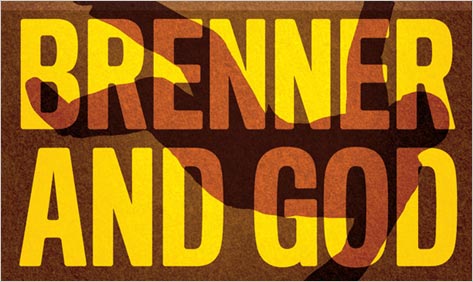 The loquacious narrator of Wolf Haas’s Brenner and God wants us to know straightaway that he is tired of “who-got-who with a bullet, a knife, an extension cord” and is “far more interested in the nice people now, the quiet ones, the normals.” Like Simon Brenner, the battered ex-detective turned chauffeur/bodyguard who is content these days merely to drive. Although he still looks like the tough guy he never really was. “An irony of fate,” the narrator confides, “Brenner owed his broad shoulders — which, in the eyes of women, lent him an energetic aura — to the endless push-starting of the stalled jalopy that was his life.”

That life is easier now, thanks to prescription drugs and to the pleasure of driving Helena, the two-year-old daughter of a physician and a construction magnate; “an amiable kid who understood him so well.” With the mother’s medical practice in Vienna (picketed daily by anti-abortion demonstrators) and the father’s company headquarters in Munich, Helena and Brenner spend most of their time happily commuting on the autobahn. Until the fateful morning when Brenner stops for gas and leaves Helena in the car while he buys her a chocolate bar. When he returns, the child is gone: “…later he had no memory of how he had run around the gas station…. He didn’t remember stumbling out of the lot and running up and down the street.”

Brenner’s panicked reaction, ingeniously described, seems both immediate and distant, like the useless images caught on the gas station’s surveillance video that can be rewound but never undone. In a single lapse, the ex-cop loses his job but returns to his profession as he sets out to find Helena and, in doing so, enters a familiar world of violence and corruption. Yet even as Haas darkens the mood of this sly and entertaining novel, he maintains its sardonically irreverent tone. Toward the end, for example, as the villains prepare to drown Brenner, we are advised, “If you scare easily, think about something else now…reclining chair, suntan lotion, sound of the waves. And not of that patch of grass beside the cesspit.” The suggestion, like all of Haas’s cleverly timed diversions, only increases the tension that pervades even the most mundane scene: Brenner drinking espresso at the fateful gas station, tracking down another driving job, enduring the conversation of an anti-abortion zealot.

There are startling revelations and cunning plot twists. But Haas has no time for heroic action or for tidy conclusions. Instead he shows us how the crimes that Brenner uncovers — of political corruption, sexual exploitation, extortion — penetrate ordinary lives. “At first it’s harmless really and not an actual crime yet,” Brenner reflects when he unearths the first grisly clue: “who you’d have to kidnap if you were to do it…buy a good roll of tape at the hardware store — still not a crime yet — and finally tidy up the basement. That, too, still isn’t a crime yet.” The gradual slide, whether toward religious fanaticism or murder, is wonderfully captured as the novel reaches an unpredictable, oddly satisfying conclusion. We recall the narrator’s early observation: “Certainty: always black ice.”