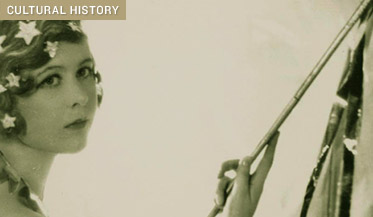 We are by now so hopelessly mired in celebrity culture that it’s almost impossible to conceive how recent a phenomenon it is: not even a century old, it turns out. The first group to comprise a celebrity culture in the modern sense was London’s so-called Bright Young People, a free-spending, high-profile mixture of bohemians and aristocrats who partied their way exhibitionistically through the 1920s. They were too young to have fought in World War I but had been brought up in its shadow, seeing many of their older brothers and friends killed on the Western Front. Their reaction to the inevitable survivor’s guilt, and to the rather rigid Edwardian mores of their parents — the generation who had brought about the war, after all — was rebellion through flippancy. They thumbed their noses at life and its tragedies with deliberately provocative frivolity and excess; the emblematic event of the era was the well-publicized theme party. As Evelyn Waugh wrote in Vile Bodies (1930), the seminal Bright Young People novel, there were “masked parties, Savage parties, Victorian parties, Greek parties, Wild West parties, Russian parties, Circus parties?.dull dances in London and comic dances in Scotland and disgusting dances in Paris?.” And on and on.

Vile Bodies and its predecessor, Decline and Fall (1928), read like insanely over-the-top satires, but many of his contemporaries noted that Waugh had hardly exaggerated anything. The truth was wild enough, and there are recognizable real-life counterparts for most of his characters, even the more extravagant ones such as Lady Metroland, Peter Pastmaster, Sir Alastair Digby-Vane-Trumpington, and Miss Agatha Runcible, profligate figurehead of the Bright Young People. The original for Miss Runcible was Elizabeth Ponsonby, the feckless daughter of a high-up Labour politician and granddaughter of Queen Victoria’s private secretary. Revelations about her unedifying career have provided the raison d’ être for the latest of many books on the era, D. J. Taylor’s Bright Young People: The Lost Generation of London’s Jazz Age.

Taylor was given access to the Ponsonby family’s unpublished letters and diaries, enabling him to reconstruct Elizabeth’s career from her youth as the most visible partygoer of her time — a sort of contemporary Paris Hilton — through her brief and pathetic marriage, the sad period that saw her broke and boozy, scraping a living as manager of a sleazy nightclub, and her death from alcoholism at the age of 40. Her father’s pleading letters make heartbreaking reading and sum up all the bitter contrasts of a generation gap whose width and depth would not be seen again until the 1960s.

Observing the scene, as he does, through the prism of Elizabeth Ponsonby’s life, Taylor’s view of the Bright Young People is understandably jaundiced. But during its heyday the movement was an intensely creative one. It launched many careers, including those of Waugh, Anthony Powell, and Henry Green, three of the best novelists of the 20th century; John Betjeman, the most beloved English poet of his time; the brilliant light novelist Nancy Mitford; Cecil Beaton, who as a photographer and designer crystallized his world and delivered it to posterity; the Byzantinist Robert Byron; the historians Harold Acton and Lord Kinross; and many more. This cohort, however different and even mutually antipathetic its individual members might have been, shared a sensibility and an aesthetic that influenced British artistic and intellectual life throughout the century. The silly jargon and in-jokes of the ’20s (to quote Vile Bodies again, on an occasion where Miss Runcible is arrested: ” ‘Well,’ they said. ‘Well! How too, too shaming, Agatha, darling,’ they said. ‘How devastating, how unpoliceman-like, how goat-like, how sick-making, how too, too awful’ “) eventually developed into a recognizable ironic outlook that colored the work of all who had come in touch with it. “Their style,” Taylor writes, “– brisk, affected, outwardly impersonal, inwardly often deeply vulnerable — influenced a host of descendents who knew nothing of their ancestry.”

Part of that style devolved from the gay sensibility enveloping the group. As Taylor says, “No English youth movement, it is safe to say, has ever contained such a high proportion of homosexuals or — in an age when these activities were still illegal — been so indulgent of their behavior,” and all of the Bright Young entertainments were invested with an “irretrievable air of campness.” The buffoonery of Byron, who liked to dress as Queen Victoria (whom he resembled), and Acton’s silken façade and feline gift for gossip made their indelible mark; so did the outrageous Stephen Tennant, who ornamented the festivities with his “elaborately coiffed blond hair set in marcelled waves, and pale, flapping hands,” and Brian Howard, who though “expected, not least by himself, to write novels that would out-Firbank Firbank in their orchidaceous subtleties?ended up as a tragic-comic turn in works by other people.” (He was the inspiration for Waugh’s Ambrose Silk and Anthony Blanche, among other literary characters.) A number of these epicene young men transported the ’20s gay style far into the later 20th century: Harold Acton was still holding court at his Italian villa in the 1990s; the elderly Lord Faringdon, who as Gavin Henderson had graced Bright Young parties in his youth, was once heard to address the House of Lords not as “My lords” but as “My dears.”

As all of this indicates, the principle attraction of the Bright Young People was their humor — at their best they could be devastatingly funny, as so many diaries, letters, and novels of the period prove. Taylor’s book, strangely enough, is not funny; there is hardly a laugh in it, which puts him by definition at odds with the people whose lives he chronicles. There seems a basic lack of affinity; he doesn’t particularly like these people, and he is not amused. His comments on the novels of the period are especially obtuse. One wonders why he chose to write about all this, aside from the tempting opportunity provided by the Ponsonby papers.

Of course he is not unjustified in his dyspeptic outlook. The Bright Young People movement quickly curdled, with Elizabeth Ponsonby by no means its only casualty. Brenda Dean Paul, the “It” girl of the era who became a hopeless drug addict, remembered that by the end of the ’20s “the parties became more and more frequent, more and more lacking in originality and amusement, until they became merely massed drinking orgies, attended by a few bleary-eyed demoralized bright young pioneers, too tired, too much in a groove to break away.” The truly creative spirits had by now moved on; the grim political events of the ’30s made the revels of the previous decade look decadent. Henry Green’s brutal little novel Party-Going (1939) spelled finis to an era.

Nevertheless, the movement’s effervescent peak has charmed and fascinated subsequent generations. Taylor’s book on the subject may possibly be the most comprehensive, but it is not the best or the most sympathetic. Martin Green’s Children of the Sun (1976) did the same thing rather better, and Society Racket (1933) is a terrific eyewitness account by gossip columnist Patrick Balfour (later Lord Kinross). There are the matchless early romans à clef of Waugh, Mitford, and Powell, and there are countless memoirs, biographies, autobiographies, letters, and journals of the key players, including Betjeman, Acton, Howard, Tennant, Beaton, Tom Driberg, Cyril Connolly, Waugh, Powell, Green, Nancy and Jessica Mitford, and Diana Mosley (née Mitford). And then there are the many additional volumes catering to the British public’s apparently insatiable appetite for all things Mitford.

We, like the Bright Young People in 1930, now find ourselves on a dividing line between a time of gross excess and what appears to be a grim and threatening future. D. J. Taylor’s schoolmarmish disapproval of his frivolous protagonists makes sense in the context of 2008 and in the context of 1930. But the book’s underlying sourness fails to give the brightest days of the mid-’20s their due.