Broadcast Hysteria: Orson Welles’s “War of the Worlds” and the Art of Fake News

By A. BRAD SCHWARTZ

Even the most devoted fan of old-time radio is probably apt to forgive the modern-day listener for thinking that any broadcast from the late 1930s must necessarily be a creaky, stagey thing, complete with patches of static. There are, of course, plenty of surviving broadcasts to fit the bill of the radio relic, but there are also a raft of programs that can make listening veteran and neophyte alike say, “Wait? What?! You were ever allowed to do that on the radio?” Cue, then, what Orson Welles and his Mercury Theatre troupe got themselves up to in the week leading into Halloween, 1938.

If you’re looking for the thrill that comes from witnessing sheer audacity Welles is still your man, in a host of mediums. His ambition as a film director, from Citizen Kane to Touch of Evil, is well known. But as A. Brad Schwartz posits here, in a bio of a radio broadcast that illuminates the bio of one of this country’s great artists, Welles was ranging out ahead of his peers long before he got to Hollywood, his art being a mélange of theater and theater/literature imagined for the radio, fueled by a willingness to go for broke. The broadcast in question is War of the Worlds, which you’ve probably read about, or heard tell of, for taking the H. G. Wells book about invading Martians, playing it up as a hoax on the air, and causing the good people of America to lose their collective senses and head for them thar hills, believing the aliens were wiping out all of us.

Welles, who marks his centenary on May 6th, was twenty-three the week he was formulating the show that nearly ended his career. He was on such a hot streak as he scored one popular and critical Broadway success after another (his adaptation of Julius Caesar, set in fascist Italy, broke attendance records) that his star was if anything too fast in ascendancy. Something had to give. Which, as we learn from the public relations fallout of War of the Worlds, is when Welles would rally and advance a career that looked like it might have just crashed and burned. 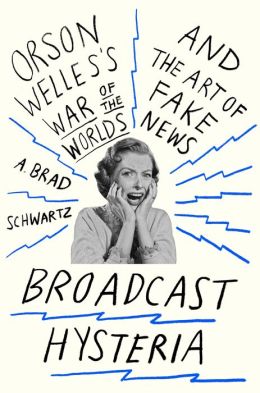 Schwartz does a compelling job showing us the pace of Welles’s NYC life, zooming hither and yon from gig to gig, tearing apart scripts moments before going on the air and then pasting older drafts together, or just answering the door naked at his hotel because he’s too busy to dress. We get a sense of just how a radio program that was derided as being “for the classes, rather than the masses” and reached less than 4 percent of a radio-mad public, became arguably this country’s biggest controversy for a spell. Schwartz is clinical in the breakdown of circumstances: there was the Sunday evening air time of the show, a point in the week when people were often gathered in groups — groups being big scare spreaders — and were only half listening to the dozy bits that kicked off the broadcast, which Welles brilliantly intended to be lulling. “He believed that listeners would only accept the unrealistic speed of the invasion if the broadcast started slowly, then gradually sped up,” as Schwartz writes.

When it speeds up, in this account, Schwartz’s prose speeds up, and you can all but feel the excitement in his typing fingers as he must have sat there writing away while listening anew. We see Welles conducting his charges like Furtwängler at the podium. Voices overlap, sounds collide; actor Frank Readick, who gets obliterated early on, has the key sell to make and channels the voice of the announcer on the notorious Hindenburg disaster broadcasts, as his own demise draws nigh. You read this book, and you’re all but guaranteed to have a listen, whether that’s for the 500th time or the first, and you can practically feel objects whizzing past your ear. “It all sounded loud, messy, and real,” Schwartz writes.

“This is Orson Welles.”

And then there is the moment that Schwartz recounts with glee: Just as Readick’s announcer “dies,” Welles holds the pause button for a full six seconds. Dead air is such a threat for radio stations that fail-safe measures are in place to insure against it, but Welles served it up, and the six seconds always feel like thirty. Post-broadcast, it didn’t take long for tales of suicides and flight and backed-up traffic to generate, as the country came undone. But, part of the point of doing a book like this is to hang out a big sign reading, in effect, DIDN’T HAPPEN. Schwartz parses the postmortem expertly, with a big assist from a trove of letters — to the Mercury, the FCC, and a number of newspapers — that were uncached in recent years.

The correspondents tear into Welles: “Your conduct was beneath the social standing of and would be unbecoming and below the moral perception of a bastard son of a fatherless whore.” But perhaps more revealing are the letters that start by lambasting the radio upstart and then, circa the midpoint, turn to begrudging respect, and by the close are downright fawning, a case of, okay, dude, you got us. Weirdly, those most fearful for their lives seemed to have ended up feeling more alive than ever, Welles having provided the infusion of that life force that can perhaps only come with art. “Such a relief when they announced what it was,” went one such letter. “Then we all laughed + laughed. It had given us a thrill we hadn’t had in ages.” But those six seconds of dead air will get you like any six seconds out of Beethoven. Try doing that with silence.

War of the Worlds, as this country’s most famous radio broadcast, has gone on to overshadow the rest of the Mercury’s output, much of which was sterling, and some of which was even better. Five other Welles broadcasts to check out:

5. The Open Window, August 8, 1938
One of three short stories the Mercury adapted that night, the Saki tale is one of its author’s more eldritch, which is saying something. Welles, who normally wasn’t down for outright terror tales, could be an absolute fiend when he was. The story features a world superimposed on another world, like one frame of mind from another time overlaid atop one from the present, making it ideal Mercury fodder, with the radio itself seeming to possess mediumistic qualities.

4. Seventeen, October 16, 1938
Scott Fitzgerald used to worry he’d end up writing young adult novels like Tarkington did with this one, but good old Booth was never more effervescent or bracingly comedic than with this account of lovestruck teen Willie Baxter, whom Welles plays with a relish befitting a genius who was so busy being a genius that he never had much of a childhood himself. Welles did charm, Welles did winsomeness, but he didn’t often do earnestness. You get all three here.

3. Hell on Ice, October 9, 1939
A departure, both for the Mercury — we’re in nonfiction land this time — and for the listener: it is off to the Pole for a Scott-esque nightmare. Wellesians treasure this one, both as an eco-parable that pulls a Jules Verne type of move and gets fresher every year, and for its sound effects. The ice and the snow has at you like a moorland wind in a tale from M. R. James or a Brontë sister.

2. A Christmas Carol, December 23, 1938
Listen to this once, and it’s enough to elbow aside a work or two your family has returned to at Christmas for years to make room for itself in the seasonal programming. Possessed of a heart as big as a dozen fir forests, Welles’s production grasps why Dickens’s most perfect work is his most cannily far-reaching: Scrooge really isn’t that bad. Or rather, he’s not much worse, to begin with, than the selfish rest of us. Which means an extra something when he gets his second chance and takes it. You can practically feel Welles in the crook of your elbow.

1. Dracula, July 11, 1938
A doozy. The first Mercury broadcast may also be the best; it’s certainly the strangest, the most intense, and one has the sense that, thinking they’d maybe never get another go at this type of thing again, a thousand horses were let loose from a barn they could never be stuffed back into. Stoker’s novel possesses an under-reported proto-modernism, with its collage approach to narrative, with press clippings, sound cylinders, scraps of letters, excerpts from journals, and ships’ logs going into the beautifully fetid brew. Welles ups the sex, if that’s even possible, and Drac’s incantations have all of the thrust and rhythm of, well, you know. Insane and inspiring.