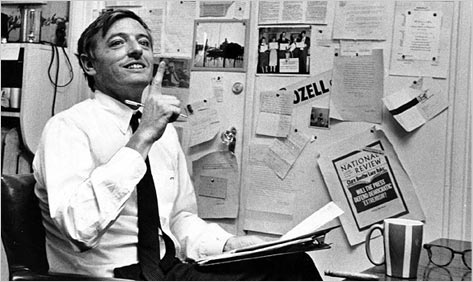 Historians rarely have much to say about the role of charm in public affairs. But it matters, and sometimes it matters a lot. William F. Buckley Jr. founded and spent thirty-five years editing National Review, published some fifty-odd books, hosted 1,429 episodes of Firing Line, and wrote a syndicated newspaper column from 1962 until the day of his death in 2008. Yet anyone who seeks to explain the nature of his contribution to American political life must start by pointing out something else that those who knew Buckley took for granted, which is that he was an irresistibly charming man. Whatever your political beliefs, you couldn’t spend five minutes in his company without liking him, or feeling that he liked you (if he did). It was this charm that made him socially palatable at a time when conservatism was widely looked upon by the liberal establishment as one step short of outright bigotry. Moreover, that same charm also made it possible for Buckley to persuade conservatives of all stripes, not a few of whom despised one another, to band together into a movement that is now as central to politics in America as the liberalism that he opposed so passionately and with such flair.

For this reason, it’s impossible to talk intelligibly about Buckley without talking about his personality. Indeed, it’s far more important to talk about his personality than about his philosophy, which was anything but original. He was a journalist, not a systematic thinker, and in addition to his personal charm, his other special gift was the ability to popularize the ideas of others. The Brits call such folk “publicists,” and Buckley was, if such a thing exists, a publicist of genius. Therein lay his true significance. Though he was a deft and agreeable stylist, I doubt that many of his books will long survive him. If he is remembered, as he should be, it won’t be for what he wrote but for what he did — and who he was.

The trouble with Carl T. Bogus’s Buckley: William F. Buckley Jr. and the Rise of American Conservatism is that it fails to convey its subject’s personality other than in fitful flashes. This is not entirely Bogus’s fault, for his book is not a biography of Buckley. It is, rather, a history of Buckley’s role in nailing together the American conservative movement, and it comes to an end not in 2008 but in 1968, by which time he had “given the conservative movement both robust life and sharp definition.” But given the fact that the dust jacket describes Buckley as “the most balanced and authoritative biography ever published of this dynamic figure,” it seems safe to say that Bogus and his publishers have sought to pass this book off as something other than what it is, a monograph that brings off the improbable feat of making Buckley seem the least little bit dull.

That said, Bogus deserves full credit for delivering on the promise made in his introduction:

I should tell the reader up front that I am a liberal and thus critical — in some instances, highly critical — of Buckley’s ideology. I nevertheless admire William F. Buckley Jr. enormously…. Like many, I am disheartened by the present state of partisan animosity. I believe one solution to this state of affairs is to take opposing ideas seriously. That does not mean pulling punches in debate; it means honestly trying to understand the other side. This book is my contribution to that debate.

Sure enough, Buckley is as fair-minded a study of its subject’s career as you could possibly expect from a contributor to The Nation and Tikkun. It deals bluntly but honestly with such difficult topics as his equivocal views on civil rights, and it gives him full credit for having purged the conservative movement of such “loonies” (Buckley’s word) as the members of the John Birch Society. Above all, Bogus recognizes that “Buckley and his colleagues changed America’s political realities,” both by making conservatism intellectually and socially respectable and by turning the GOP into something not far removed from a genuine conservative party.

But Buckley is too soberly written to be of interest to the average reader, and the only full-scale biography, John B. Judis’s William F. Buckley, Jr.: Patron Saint of Conservatives (1988), is both outdated and overly partisan. The best thing published so far about Buckley is Richard Brookhiser’s Right Time, Right Place: Coming of Age with William F. Buckley Jr., and the Conservative Movement (2009), a sympathetic, at times startlingly candid memoir that describes him more vividly than anything other than Buckley’s own autobiographical volumes, of which Cruising Speed: A Documentary (1971) is the first and best. What is now needed is an up-to-date biography written by someone with the twin gifts of literary portraiture and historical perspective. This, alas, isn’t it.

Terry Teachout, the drama critic of The Wall Street Journal, has been a contributor to National Review since 1981. His latest book is Pops: A Life of Louis Armstrong.