Butterfly in the Typewriter 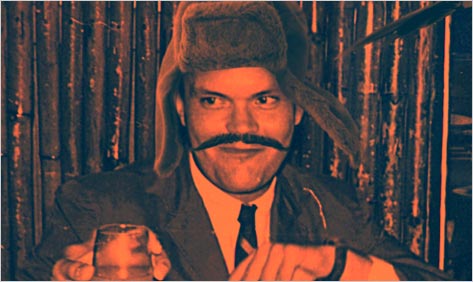 Go a little distance through the world with a copy of John Kennedy Toole’s A Confederacy of Dunces in your hand and you’ll find that it operates less as a book and more as an unpredictable engine of friendship, allowing you to share moments of  irruptive collegiality with complete (and sometimes less-than-complete) strangers. The effect, for reasons of local patriotism, is especially strong in New Orleans, where A Confederacy of Dunces enjoys a particular favor among pickpockets, drunken academics, and garrulous persons riding the bus. But it can happen anywhere. A few weeks ago I mentioned the book in passing to my seat neighbor on a transatlantic flight, and within minutes we were swapping lines — “lascivious, gyrating children!,” “my valve is closing!” — and snuffling with air-conditioned mirth.

Cory MacLauchlin’s Butterfly in the Typewriter tells two stories: that of John Kennedy Toole and that of his great novel. That the stories are distinct is the tragedy, as every Dunces nut knows — because after the cackling with your new friend and the crossfire of quotation and misquotation, one of you will inevitably frown and say: “You know the guy killed himself…?” It’s a bemusing and terrible fact: A Confederacy of Dunces, so vigorous, so hilarious, winner of the 1981 Pulitzer Prize for Fiction, came into the world as an orphan, its publication midwifed by Walker Percy (more of him later) but its progenitor already dead by his own hand, gassed in his car on a Louisiana roadside.

What went wrong? One of the ghastlier byproducts of suicide is its reversal of chronology: the life thus terminated is viewed, essentially, backward. In the early chapters of Butterfly in the Typewriter, which detail Toole’s precocious but not particularly remarkable New Orleans childhood and adolescence, this produces intermittently the sensation of going the wrong way down a one-way street. We read that the young Toole was a good dancer, loved the stage, wrote interesting high school essays, was ambivalent with girls, etc., and we feel anxious and unable to concentrate. Sequential, horizontal narrative seems a mistake, somehow.

But MacLauchlin conveys the information ably and diligently. And it’s worth knowing, for example, that Toole’s father, John, suffered from an unspecified mental illness that involved talking incessantly and walking around the house in his underwear. Or that, while teaching at the Southwestern Louisiana Institute, Toole encountered “a mustached medievalist” named Bobby Byrne, who assigned Boethius’ Consolation of Philosophy to every class he taught, loved hot dogs, and — perhaps as a consequence of the latter — suffered tremendously from gas. (“Ill-timed flatulence,” MacLauchlin calls it, leaving the reader to wonder what well-timed flatulence might be.) Presented thus with his lead character, Toole grabbed the gift with both hands, and Confederacy‘s Ignatius J. Reilly — a bloating Boethian — was born.

Toole began the book in 1963 in San Juan, Puerto Rico, where he was serving Uncle Sam by teaching English to Spanish-speaking recruits. A year later it was finished, and the novice author had entered into a dialogue with Robert Gottlieb, star editor at Simon and Schuster. This is where the trouble begins, and not coincidentally where MacLauchlin’s book kicks into gear. With the utmost courtesy Gottlieb prevaricated, hemmed and hawed over the manuscript, made a number of sensitive suggestions, coached and counseled Toole. The total effect of his professional attentions was to unnerve and finally unbalance the fragile writer. Their back-and-forth makes grim reading: “There must be point to everything you have in the book,” warns Gottlieb in one letter, “a real point, not just amusingness forced to figure itself out.” Months pass, and Toole gives up. “The only sensible thing to do, it seems to me,” he writes to Gottlieb in January 1965, “is to ask for the manuscript. Aside from some deletions, I don’t think I could really do much to the book now — and, of course, even with revisions you might not be satisfied.” The strain of being reasonable was too much for Toole. He fainted in Gottlieb’s office. He became convinced that George Deaux, a successful Simon and Schuster author, had plagiarized him. He drifted away.

After his death it was left to Toole’s mother, the formidable Thelma, to wage a one-woman war on behalf of the unpublished novel. In time her cause would be assisted by Walker Percy, to whom much credit goes: I hadn’t realized until I read Butterfly in the Typewriter quite how hard the good doctor worked to get Toole’s book into print. Thank him silently (or blame him) the next time a stranger accosts you with a glad light in his eyes, wanting only to talk about A Confederacy of Dunces.

Previous Previous Post: Delivering James Dickey
Next Post: Zona: A Book about a Film about a Journey to a Room Next