Can You Write a Novel While You Build a House?

I caught the writing bug during my undergraduate days at the University of Iowa in Iowa City, Iowa, and although I’d been born and raised in that storied little city (Flannery, Stegner, Vonnegut!), or because of that, when I got the chance to pursue my MFA in faraway New England (New England—it sounded like another country!), I grabbed it. Three years later, with a few published stories, my first literary agent, and my degree in hand, I left UMass, Amherst, and began hitting things with a hammer.

I was twenty-four then, and I’ve spent nearly as many of the following years hitting things with a hammer, and so I’ve had plenty of time to shape—and re-shape, and sand, and varnish, and start all over again from scratch—the answer to the question so many people think to ask, which in its essence goes, What is the relationship between writing and carpentry?

Whenever I hear this question I get the feeling the asker already has a pretty good idea about the answer, but wants to hear me say it—wants to hear me assemble in the space between us any number of nifty metaphors, as if the question were intended to provoke a live demonstration of my mastery of both crafts at once.

In both cases, I might say, one begins with nothing—raw materials—and works at his creation day by day, brick by brick.

The tools in the toolbox must be sharp, most of all an eye for detail.

Both kinds of craftsmen must possess great patience and a love of the process itself.

They must return again and again to the lessons of the masters.

They must be expert in the strength of materials and fluent in the language of grain.

I might give that kind of answer, but I don’t. Instead I begin to talk about the writer/carpenter brain: What happens when its work is split between one form of creating and the other—a productive, a beneficial split, yes or no?

Going strictly on personal and in no way scientifically proven experience, I say that even though writing fiction and building things would seem to be rooted in a common lobe of brain—the creative, making-stuff lobe—they actually are not, because the two processes are not reciprocal.

Example: I have had many fictional stories announce, repair, or finish themselves in my brain while I was engaged physically in carpentry—planing, sanding, shaping some piece of wood—but I have never once thought of the solution to a carpentry challenge while sitting at my desk writing fiction.

Which is not to say that carpentry is not mentally demanding: there is a reason for that old carpenter’s saw, Measure twice, cut once. Carpentry often calls for extensive, brain-hurting calculations, an error in which can mean more than wasted time; it can cost big money for you, the boss, the client. (Not to mention: power tools, and the cost of operating them with less than your full attention.)”

As a writer you may spend longer than you wanted to on a paragraph, or you may end up throwing out hundreds of pages, but no time spent writing is wasted time. 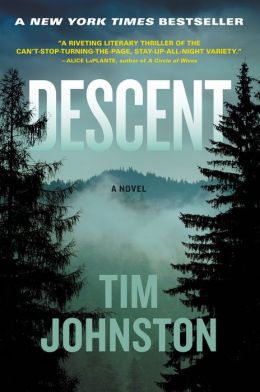 But in carpentry there is also a kind of zone, or Zen-ness that does not have its counterpart in writing. The carpenter, as he or she becomes more masterful, also becomes less conscious, more at ease with hands and tools, more automatic, and it’s this not-quite-mindless state of being, of functioning, that creates the mental space for the scene, or story, or novel to take up shop in the carpenter’s brain.

The inverse is not true. Although there are days when the writing seems to flow as if from some wide-open valve, it is never, ever mindless. Writing uses the whole brain, the juicy upfront parts and the deep-down crannies too, and often the writer doesn’t even know what’s he or she’s created until much, much later.

By now the asker of the writing/carpentry question has drifted away, probably more than mentally, wondering why I didn’t just talk about how writing a book is like building a house.

Lately—since the publication of Descent, actually—I’ve been answering this question with a story, a very short one, about a carpenter who one day packed up all his tools and drove his truck high into the Rocky Mountains to do the finish work on a house his father had built up there. The carpenter wasn’t going to try to write up there; he was just going to be a carpenter. And so he worked, week after week, all alone, doing good work, doing masterful work, and six months later when he packed up his tools again and came down from the mountains, the house was beautiful, artful, finished…and he had the first 200 pages of a new novel in his hands.

TIM JOHNSTON is the author of the debut adult novel Descent, the story collection Irish Girl, and the young adult novel Never So Green. Published in 2009, the stories in Irish Girl won an O. Henry Prize, the New Letters Award for Writers, and the Gival Press Short Story Award, while the collection itself won the 2009 Katherine Anne Porter Prize in Short Fiction. In 2005 the title story, “Irish Girl,” was included in the David Sedaris anthology of favorites Children Playing Before a Statue of Hercules. Johnston’s stories have also appeared in New England Review, New Letters, the Iowa Review, the Missouri Review, DoubleTake, Best Life Magazine, and Narrative Magazine, among others. He holds degrees from the University of Iowa and the University of Massachusetts, Amherst. He currently teaches in the creative writing program at the University of Memphis.