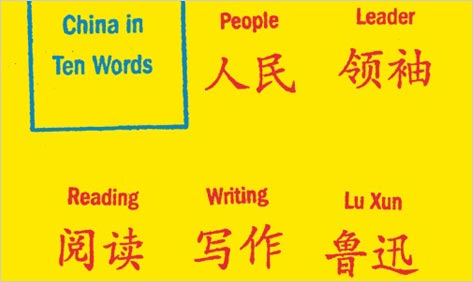 How many tomes do you suppose it might take to describe the almost indescribable complexities of modern China — its staggering growth pains and infinite ironies? Yu Hua does it with ten words.

“This tiny lexicon,” he writes, “gives me ten pairs of eyes with which to scan the contemporary Chinese scene from different vantage points.” The goal of China in Ten Words is nothing less than compressing “the endless chatter of China today” into a rich, sympathetic, yet unsparing portrait of a nation in near-constant transition. The chapter titled “Leader,” for instance, allows him to convey a pungent sense of the paradoxes of Mao worship. We all know that the Great Supreme Commander was revered during his reign, of course, but did you know that his immortal sayings were stenciled on the interior of spittoons and his image inscribed inside toilet bowls? This during the time when he was in full official favor.

In 225 pages of ten chapters with such titles as “Grassroots,” “Disparity,” and “Revolution,” the author manages to make palpable the follies of the nouveaux riches, the grotesque plight of the rural poor, the corrupt and tragicomic missteps of the ignorant charlatans who make up the passing parade of local politicians, as well as the blazing brutality of what took place on the Square that night when the army rolled over student demonstrators in their tanks. (That iconic shot of the student halting the tank was taken before the implacable orders came down from on high.) Miraculously, he does all this without seeming to oversimplify.

Clearly, Yu Hua was the man for the job. The fifty-one-year-old author was raised in China’s impoverished outback and served as an ardent member of the Red Guard youth (in whose ranks he proved himself a consummate, self-confessed bully) long before attaining international recognition as the first Chinese writer to win the James Joyce Award. He knows, in other words, whereof he speaks. But mostly he was qualified to undertake such a project because of his gift for compassion. Speaking of his time dispensing inoculations to weeping schoolchildren with needles reused so often their barbed tips yanked out a dollop of flesh from each young arm, he admonishes himself for not pricking his own arm to see how painful it was. Only then would he have understood their pain, he says.

It is when the suffering of others becomes part of my own experience that I truly know what it is to live and what it is to write. Nothing in the world, perhaps, is so likely to forge a connection between people as pain, because the connection that comes from that source comes from deep in the heart. So when in this book I write of China’s pain, I am registering my pain too, because China’s pain is mine.

That’s right in the introduction, so you know what you’re in for. Pitched at a level of heartbreak that may be almost unbearable for Western sensibilities, the final two chapters, “Copycats” and “Bamboozle,” are nevertheless essential reading for anyone who hopes to get a sense of both the ingenuity and breathtaking chicanery that together drive so much of life in modern China.