Claire of the Sea Light 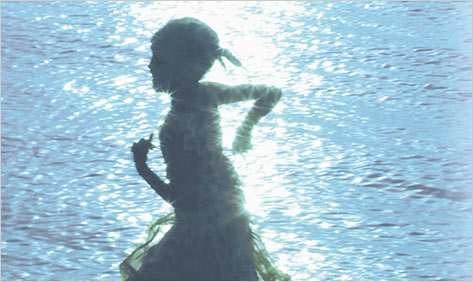 Reading the fiction of Edwidge Danticat is like falling into conversation with a smiling, mild-mannered stranger who, in a softly melodious voice, tells you things that shock you to the core. Ever since the publication of her first novel — and most particularly in her later ones — Danticat has quietly yet insistently forced her readers to contemplate the harsh and exquisite world of her native Haiti, lulling us with the spare, rhythmical grace of her language while denying us any sense of smugness or relief. Her lyrical style lets neither character nor reader off the hook; rather it embeds the hook even deeper. The title of Danticat’s finest novel, for example, The Dew Breaker, seems to be just another poetic phrase. Until you learn that the term was used in Haiti to describe the Tontons Macoute killers who would habitually arrive “before dawn, as the dew was settling on the leaves” to steal away their victims. Thus language drapes horror in beauty.

In Danticat’s new novel, Claire of the Sea Light, an incidental yet memorable character, young Flore Voltaire, who was raped and impregnated by her employer’s son, remains fascinated by that same trickster, beauty. “She found it as resilient as wozo, the colorful weeds and wildflowers that grew, despite being regularly trampled, in the muck beside rivers and back roads,” Danticat writes. “…She believed that even the poorest and unhappiest of women could fight heartache with beauty, with bright or muted kerchiefs…and talcum-powdered necks.” Danticat, of course, knows better. She has a clear, unblinking eye for heartache. Yet she also describes how another character, when employed to wash and dress the dead, would sometimes “…apply special perfumes, sneak in a pair of socks or stockings of her own choosing, though the dead were never to have shoes. Shoes could only weigh a person down in the afterlife.” The power of this deceptively simple novel resides in such details.

“The morning Claire Limye Lanme Faustin turned seven,” the novel opens, “a freak wave, measuring between ten and twelve feet high, was seen in the ocean outside of Ville Rose.” Claire’s father, a fisherman, sees “a wall of water rise from the depth of the ocean, a giant blue-green tongue, trying, it seemed, to lick the pink sky.” He also sees his best friend swept away. This happens in May 2009. The opening chapter, however, has the rhythm of ancient incantation, with passages beginning “The day Claire Limye Lanme turned six….,” “The day Claire Limye Lanme turned five…,” and so on, unspooling to the day of Claire’s birth (although that, in circular fashion, comes later).  Claire knows that “…giving birth to her, her mother had died…. So her birthday was also a day of death, and the freak wave and the dead fisherman proved that it never ceased to be.” Indeed, the novel ends with a different man, from a different world, being dragged out of the waves as Claire looks on.

Before that happens, Danticat artfully sets a handful of other lives — and deaths — in motion, each overlapping the next or looping back to the former in a graceful, intricate dance. “Every few feet offered a glimpse of some private act…,” Danticat writes of the passersby view into fishermen’s shacks at night, and the same is true of this narrative. We first meet Claire’s widowed father, Nozias, and through him Galle Lavaud, the fabric vendor whom Nozias has repeatedly asked to take and raise Claire. For Gaelle has a dead husband and a dead daughter. She also has a passionate heart that links her not only to the murder at the center of the novel but also to Haiti’s criminal gangs and hired killers. “For a while there were no gang wars, just one gang…” Danticat writes of Cite Pendue, “…a destitute and treacherous extension of Ville Rose” where young Bernard Dorien rubs shoulders with gang leaders, joins the police force, and dreams of becoming a radio journalist. His fate, though clear, is one of the novel’s biggest jolts. It is linked  to the fate of Max Ardin Junior, a privileged son returned from Miami who confronts, with a mixture of terror and longing, a crime from his past — and a secret that defines his present. Each drama is, in essence, a short story. Yet, with the exception of perhaps one diversion too many (into the life of a radio host), Claire of the Sea Light unfolds as a neatly constructed whole; rhapsodic and real.