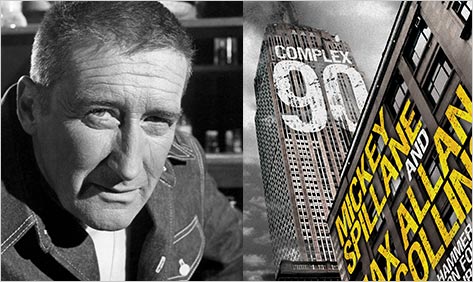 Once, while having my writing discussed in a graduate workshop, I was asked by another participant, “Have you read Gaston Bachelard’s The Poetics of Space?” I was tempted to respond with the first words that came into my head: “No, but I’ve read Mikael Spillane’s My Gun Is Quick.” And why not, if I were really serious about becoming a better writer? As Paddy Chayefsky had a character say in the 1955 Marty, “Boy, that Mickey Spillane, boy — he could write.” (The character who said it knew that better than Chayefsky did.)

Spillane died in 2006, but the books just keep on coming. A few years before his death he entrusted the six unfinished manuscripts featuring his detective-hero Mike Hammer to his friend, mystery writer Max Allan Collins. The fifth of these, Complex 90, in which Mike kills his way out of the 1964 USSR and finds Soviet assassins have followed him home to New York (a bad idea), was published this May.

The numbers of Spillane’s career — 225 million books sold worldwide, seven titles in a 1980 poll of the top-selling 15 novels of all time — tell a part of the story but by themselves are no guarantee of anything. The eventual respect he earned from his colleagues tells a more important part. It was a while coming. In a 1952 letter, Raymond Chandler dismissed Spillane as a writer of comic books (which Spillane had in fact done). When, in 1995, Elmore Leonard, acting as president of the Mystery Writers of America, bestowed the title of Grand Master, the group’s highest honor, on Spillane, it was over the objection of some members who, reportedly, didn’t like the political sensibility that had won Spillane the praise of that evil old hack Ayn Rand.

To be fair, it’s not that there isn’t anything to object to in Mickey Spillane. The politics are Red-baiting paranoid enough to prove Richard Hofstadter right. (“Don’t underplay the Reds. They’re filthy bastards, every one, but they’re on the ball when it comes to thinking out the dirty work.” — The Girl Hunters) Mike’s sadism can be so virulent as to ruin the fun. (“The other guy with the hole in his leg sobbed for me to call a doctor. I told him to do it himself.” — Vengeance Is Mine!)  And GLAAD will not be honoring Spillane anytime soon.

But to imply, as Paddy Chayefsky did, that it was simply the dum-dum public lapping up the sadism and sex that accounted for Spillane’s popularity is to ignore the thing that stands out in book after book: Spillane took palpable pleasure in writing. We may have become so used to the idea that good writing can come only from torment, so enamored of the monkish conception of writing put forth amidst incense burning in respected books like Annie Dillard’s The Writing Life, that we have lost the ability to recognize someone who’s just crazy about words, and, as Spillane was, about plots. I confess at times that trying to untie the knots of the cases Mike gets involved in have left me feeling like a fingerless Boy Scout trying to earn a merit badge. But even when the plots get too complex for their own good, there are still passage like this, from The Girl Hunters,of Mike waking up from a seven-year drunk, mourning his beloved secretary Velda, who he falsely believes is dead:

When the fuzziness went away I sat up, trying to remember what happened. I was on the couch this time, dressed in a navy blue suit. The shirt was clean and white, the top button open and the black knitted tie hanging down loose. Even the shoes were new and in the open part of my mind it was like the simple wonder of a child discovering the new and strange world of the ants when he turns over a rock.

Pay attention to the writing, which is concise, delineates the line between drunken vagueness and the sudden, disconcerting clarity of a hangover, and ends with a metaphor that’s both direct and conveys a sense of disembodied awe. Or consider this  passage from Black Alley, the last Mike Hammer novel Spillane completed:

The street I was on was strange, yet one I knew. A dim light came from either end, but I was in the middle, and something was there in front and behind that I didn’t want to face. Right beside me was an opening. It went somewhere. No…it went nowhere, but it was a way to escape the street. It looked cool and comfortable, an alley I could be safe in. It was black.

If you came upon that without knowing the exact circumstances it describes — Mike, shot twice, nearly slipping into death — it could stand for the psychic fog that surrounds any noir hero. The language is no less evocative, no less enveloping for being so spare. And notice that Spillane is so sensitive to rhythm he knows what to withhold. “Something was there in front and behind” is clipped and just elusive enough to be eerie in a way that “something was there in front of me and behind me” would not be. It’s almost as if Mike, near death, cannot refer to himself as a corporeal being.

And there is the pleasure of Mike Hammer himself, a character who, as a writer friend recently said to me about a famously pugnacious cultural critic, is loyal in both his friendship and his hatred. Imagine a mean version of the self-parody a trench-coated Spillane essayed for the Miller Lite commercials and you’ve got a good idea of the appeal of Mike Hammer: a no-nonsense tough with a little bit of the rough-hewn Casanova about him and enough of a way with a wisecrack to make him good company. The books are also a love song to a New York City of nightclubs and Broadway columnists and delis and bars where you’re welcomed as a regular, a world that was fading even as Spillane was writing.

Reading the completions Max Allan Collins has written for his good friend’s unfinished work brings Spillane’s voice and milieu into even sharper relief. I can’t imagine how tough this undertaking must have been for Collins, tying up the legacy of someone who was an important influence as well as a cherished friend. But in attempting to be true to Spillane’s voice, Collins, as Robert B. Parker did in his completion job on Raymond Chandler’s unfinished Philip Marlowe manuscript Poodle Springs, distills what it is that he loves in Spillane, and, I think, what made him so popular. It might be too much to call Spillane an American original. Rather he was an American realizer. He perfected the quickest, funniest, hardest version of a certain wisecracking tough-guy voice whose distrust of fanciness and puffery, and whose disrespect for authority put him right in the casual American grain. It may be Spillane’s hero throwing the punches in these stories, but make no mistake — it’s the writer who knocks you out.