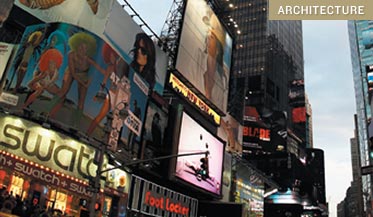 Mark Kingwell opens his book with a paean to concrete. Remarking on its ever-changing hues, its inviting textures, and especially how it comes alive in the rain, Kingwell engages our sympathy — for who hasn’t taken pleasure in the dark bleed of rainwater down the panels of a parking garage wall? It’s the alienated majesty of this material, synecdoche of the modern city, that Kingwell enlivens in the opening pages of this engaging and wide-ranging meditation on city life. Aware of concrete’s costs, Kingwell tempers his rhapsody — although inexpensive to manufacture and to deploy, it is the stuff of “the urban death maze…with invisible death rays emanating from the material itself, crumbling blocks of disease.” Even in its poisonous ubiquity, concrete inspires a self-regarding awe: for we made this stuff, called it forth from Promethean fires, tamed it, made a home of it. Concrete Reveries searches the city’s mythopoetic role in modern life: where we have New York, Paris, Hong Kong, we also find Valhalla, Olympus, the abode of dragons. Kingwell knows that in our dreams, we urbanites are gods who channel and express the rich milk of history itself — even as the city subjugates, alienates, and destroys. Like a totem animal, the city haunts our dreams, only to tear out our unsuspecting hearts.

In its ambition and rigor, Kingwell’s book is reminiscent of Delirious New York, Rem Koolhaas’s pioneering work of urban criticism. But Kingwell is a philosopher; he’s interested not only in how to think about cities but in how to think. From Socrates to Jane Jacobs, he tells us, critics of the urban tend to overlay one complexity on top of another in a haze of metaphors and circular definitions. We tend to think in snapshots, in discontinuous on-off states — models ill-suited to cities, which are ever-shifting, continuous things. For all their modernity, they are ineluctably analog. If we want to use a metaphor, Kingwell argues, we should turn not to organisms or machines or networks (three popular choices) but to collision, for each is a “tangle of vectors and imponderables. We can search through the wreckage with a fine-tooth comb and still not determine precisely what happened to get us there.” As Kingwell rings the changes on problems of inductive reasoning, we’re treated to the playful realization that although cities are made of concrete, it’s hard to think concretely about them.

Kingwell is interested in the city as a congeries of boundaries, a network of thresholds, a play of inside and outside. He’s interested in how spaces become places through the alchemy of time and experience. Kingwell isn’t theorizing the city but immersing himself in it. His first concern is with what it feels like to use the city, to live in it, love it, struggle with it. In this respect he’s less like Koolhaas than Walter Benjamin, whose massive, unfinished study of 19th-century Paris, The Arcades Project, sought to catalogue the multiplication of tastes, things, and desires bodied forth during that era in the City of Light.

Of course, Benjamin was an encyclopedic gourmand where Kingwell is selective and gourmet. Yet the philosophical scope of Kingwell’s work is perhaps greater. Whereas Benjamin wanted to reconcile Marx with magic, Kingwell traces the whole shattered root-skein of Western thought, the Gordian knot of ancient geometry and Platonic ideal form, ancestral rituals of drama and comedy, and the warp and woof of text. He’s alive to the play of system and sensibility; he reconciles the hurried, harried mindset of the Manhattan pedestrian with the gridlock and chaos of bus, taxi, jaywalker.

In chapters that glimmer like high windows, Kingwell considers the several dimensions of city living. He examines how cities and their inhabitants channel materials, needs, and habits. Next, he ponders architecture’s ineluctably prospective and prophetic sides; building, after all, is in some basic sense about the future, and great cities become fugues of an often futile hope. Later, he turns his attention to questions of consciousness and experience, wondering how living in cities illuminates the workings of the mind. The perennial urban fascination with security and defense prompts an examination of how we control the movements and thoughts of aliens, criminals, workers. How, for that matter, do we control ourselves? For even where cities mark the apogee of state control and individual alienation, they concentrate the possibilities of escape, transformation, and hope.

We’re now in only the latest stages of a global process of urbanization that began in the Middle Ages. For the first time in history, more humans live in the city than in the country. But the slums of Kinshasa or Mumbai, the blasted ruins of Baghdad and Mogadishu, seem worlds apart from the glittering play of ultramodern imagination taking place in Tokyo or Dubai (or even in the favelas of Rio). Regardless, Kingwell points out, the city is where things happen — where services are delivered (or fail to be delivered), jobs are found (or sought, or lost), crime fought (or perpetrated). In cities like São Paulo, millions live without basic municipal services of any sort while the rich, escorted by private security forces, take elevators to the helicopters that carry them above the chaos. And yet Kingwell is quick to point out that progressive answers to the world’s ills may emerge from the feral slums, where crime levels are often low (crime craves property) and residents forge collective solutions to their problems. So it was in the slums of North America and Europe, where concentrations of immigrants, set upon by illness and preyed upon by industry, gave birth to progressive movements and unloosed upon Western culture aspirations that would shape 20th-century life. I’ve seen this myself in Brazil, where favela-born teachers and activists go beyond the reach of government to start lively, daring libraries and cultural centers that transform the lives and enrich the imaginations of their fellow favelados.

But as Kingwell’s title suggests, his work is more reverie than dream; policy prescriptions and activists’ agendas will be found elsewhere. Unlike any number of recent books on the social and environmental consequences of urbanization, Concrete Reveries is no mirthless apocalypse of worry and statistics. For dyspeptic rants about the sordidness of the built environment, turn to architectural manifestos; for PowerPoint-hopeful expositions on the New Urbanism, there’s no end of not-so-big-house coffee-table books and glossy brochures extoling the wonders of Florida and Dubai. For us out-of-town visitors to the world of philosophy and the city, Kingwell is the imaginative and knowing guide we need: Virgil as flâneur.

Previous Previous Post: When Will There Be Good News?
Next Post: The Sacred Book of the Werewolf Next