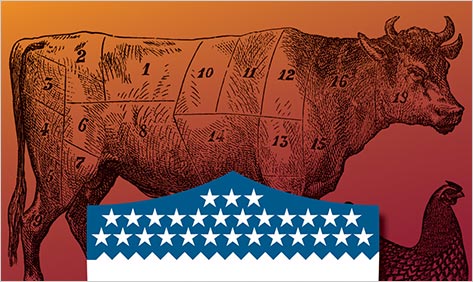 A resident of an American city in the mid-nineteenth century could expect to be regularly bombarded with the sights — and the stench — related to the business of making meat. Cows and pigs shipped alive via rail were herded through the streets to city stockyards. Once they were slaughtered, animal waste products — from blood and feces to snouts, hooves, intestines, and more — coursed through alleys and piled up in steaming heaps. By the end of the 1800s, the advent of refrigerated rail cars had enabled innovators like Gus Swift to ship fresh beef, rather than live cows, to America’s cities, setting in motion the removal of animals and slaughterhouses from the nation’s urban centers. That removal had implications for the dairy industry, too. At the turn of the twentieth century, before widespread pasteurization, milk sold in American cities during the steamy summer months often spoiled during its journey from the farm. At a time when women were being encouraged to shift from breast- to bottle-feeding, infants were especially vulnerable to tainted milk, which played a significant role in the period’s high child mortality rates.

Two new books explore the sometimes stomach-turning histories of meat and milk, respectively, in the United States. Maureen Ogle’s In Meat We Trust: An Unexpected History of Carnivore America and Kendra Smith-Howard’s Pure and Modern Milk: An Environmental History Since 1900 share a keen interest not just in the past but in its connection to the present complexities governing our relationships with the animals and industries that provide our sustenance. The books chart similar arcs: we see how industrialization and mass consumer culture transformed the production of both meat and dairy, followed by the recent growth of markets for more local, natural, and sustainable products. And we see how historically, both industries have grappled with the challenges of satisfying customers who demand products that are both high in quality and low in cost.

These days, the resulting controversies are more keenly focused on meat; Ogle argues that “battles over the production and consumption of meat are nearly as ferocious as those over, say, gun control and gay marriage.” It’s not surprising, then, that Ogle is more disputatious than Smith-Howard, whose book, though engaging and readable, is more scholarly in tone. Ogle presents what she calls a “counternarrative” about corporate farming, defending agribusiness while wagging her finger at those American consumers who think they can have “a majority urban population and small-scale agriculture, too.”

Ogle, an independent historian whose other books include a history of beer, refers more than once to Americans’ “sense of entitlement,” and she begins the book by explaining its historical context. Land for pasture was so abundant in the New World that colonial Americans ate quantities of meat unimaginable anywhere else. A visitor to Pennsylvania in the 1750s marveled, “Even in the humblest or poorest houses, no meals are served without a meat course.”

Ogle covers the production and sale of meat from the Colonial Era to the present day, and her summary of the Progressive Era, in a chapter about President Theodore Roosevelt’s war on the beef trust and Upton Sinclair’s muckraking exposé The Jungle, can be applied to the book as a whole: “Americans insisted on access to cheap food, regardless of its true cost, but believed the worst of those who made that cheap food possible and abundant.” Ogle, on the other hand, expresses mostly sympathy for the industry; she seems to find its circumstances so impossible that she lets it off the hook.

Those circumstances include a growing urban population, a shrinking supply of labor and land for farmers, and the rise of large buyers, like supermarket chains, that insist on a uniform product. To manage these often competing demands, she writes, family farmers, and not corporations, “pioneered the shift toward large scale [farming], confinement, and the use of livestock additives because they wanted more efficient, profitable farms and a lifestyle on par with that of city people.” Ogle is critical of revered reformers like Michael Pollan and Eric Schlosser, and while her perspective is important, the book will surely rankle some readers for neglecting to pay much attention to the industry’s labor practices or its treatment of animals.

Unlike Ogle, Smith-Howard, a history professor at SUNY-Albany, isn’t arguing a case as much as offering cultural and political context — in her case, to the production and consumption of milk in America. There’s a degree of overlap between the books, as Smith-Howard also explores the effects of industrialization on dairy farming. What’s particularly fascinating in the case of milk, though, is its enduring ability to symbolize “natural purity” even as it has been increasingly subjected to human technology. Dairy producers have long decorated their packaging with pastoral scenes (one butter manufacturer described his company as “selling air, sunshine, and rain”) while their products have relied more and more on industrial techniques. In the mid-twentieth century, artificial insemination became widespread on dairy farms, making even reproduction a technological act.

The purity of milk has faced different threats over time. When the threats came from nature, as with bacterial contamination or bovine tuberculosis, technologies like pasteurization, refrigeration, and tuberculosis testing were deployed to restore milk’s safety. Eventually, however, technology itself came to be seen as the biggest threat, and Smith-Howard describes evolving anxieties over pesticide residues, radioactive particles, antibiotic residues, and hormones in milk. In recent years, more and more consumers have proven willing to pay higher prices or travel longer distances for organic or — more controversially —  raw milk products.

Smith-Howard is more optimistic than Ogle about developments like these: she writes that “the most promising feature of recent interest in food and agriculture is that it encourages eaters to think of the act of eating as one with consequences beyond the realm of the individual.” One could imagine Ogle responding that the sheer number of individuals who require affordable sustenance makes such an idealistic approach to food something only a few will have the means to savor.